Yes, I just made that word up. It has absolutely nothing to do with bikinis mind you, there is more than enough internet space dedicated to those already. Instead, it's like alpinism but with a bike. Sort of get up and get down something big and steep with maybe a bit of style and grace, but mostly just in one piece and hopefully at least occasionally riding the bike as opposed to carrying it.

On a somewhat sunny and dry day a few weeks ago we embarked on a ride that we later discovered was a bikine route (yea, it's getting silly, but I'm still amused). 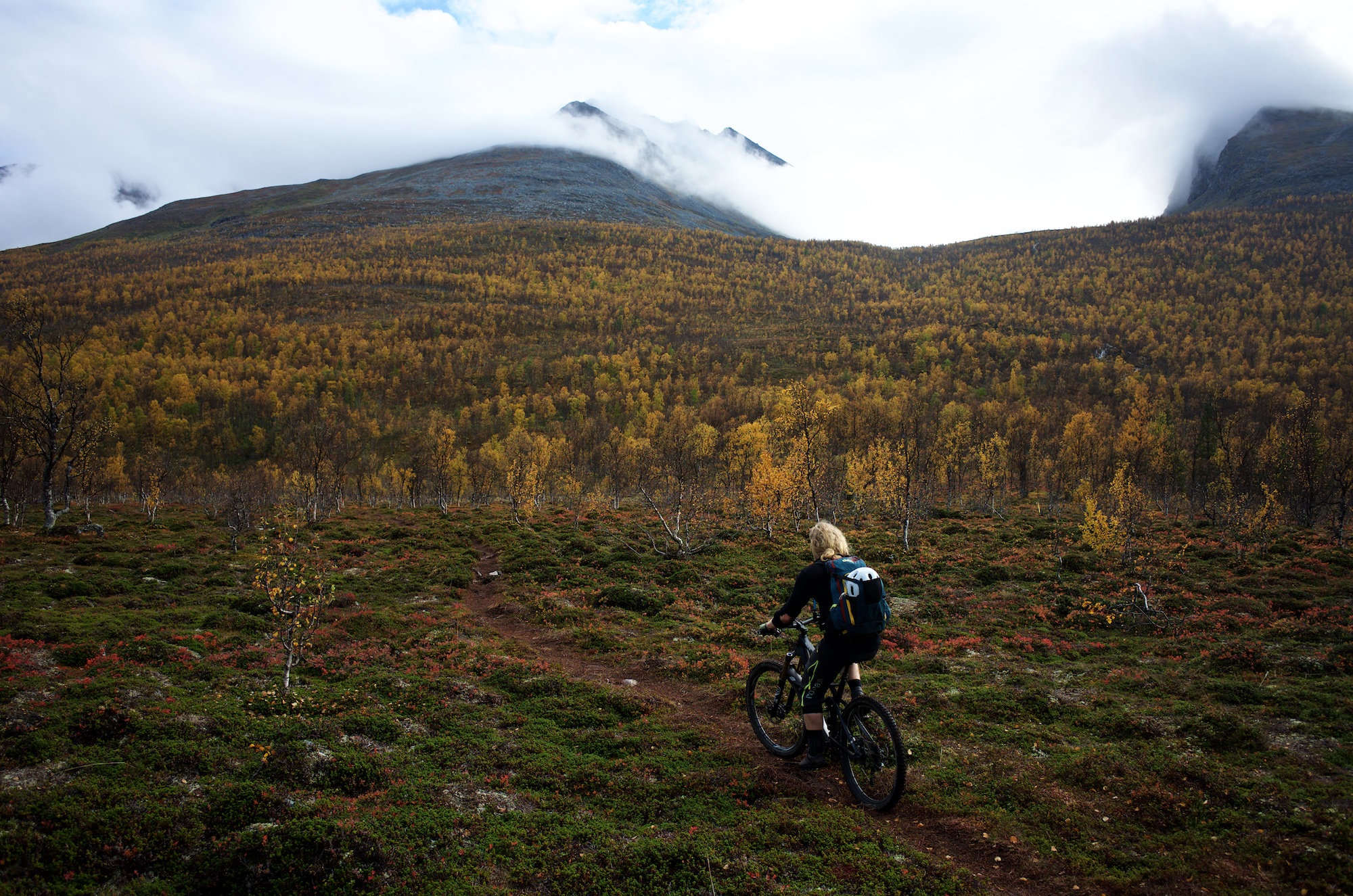 The air was chilly and damp in typical October fashion, but at least it was neither windy nor rainy. 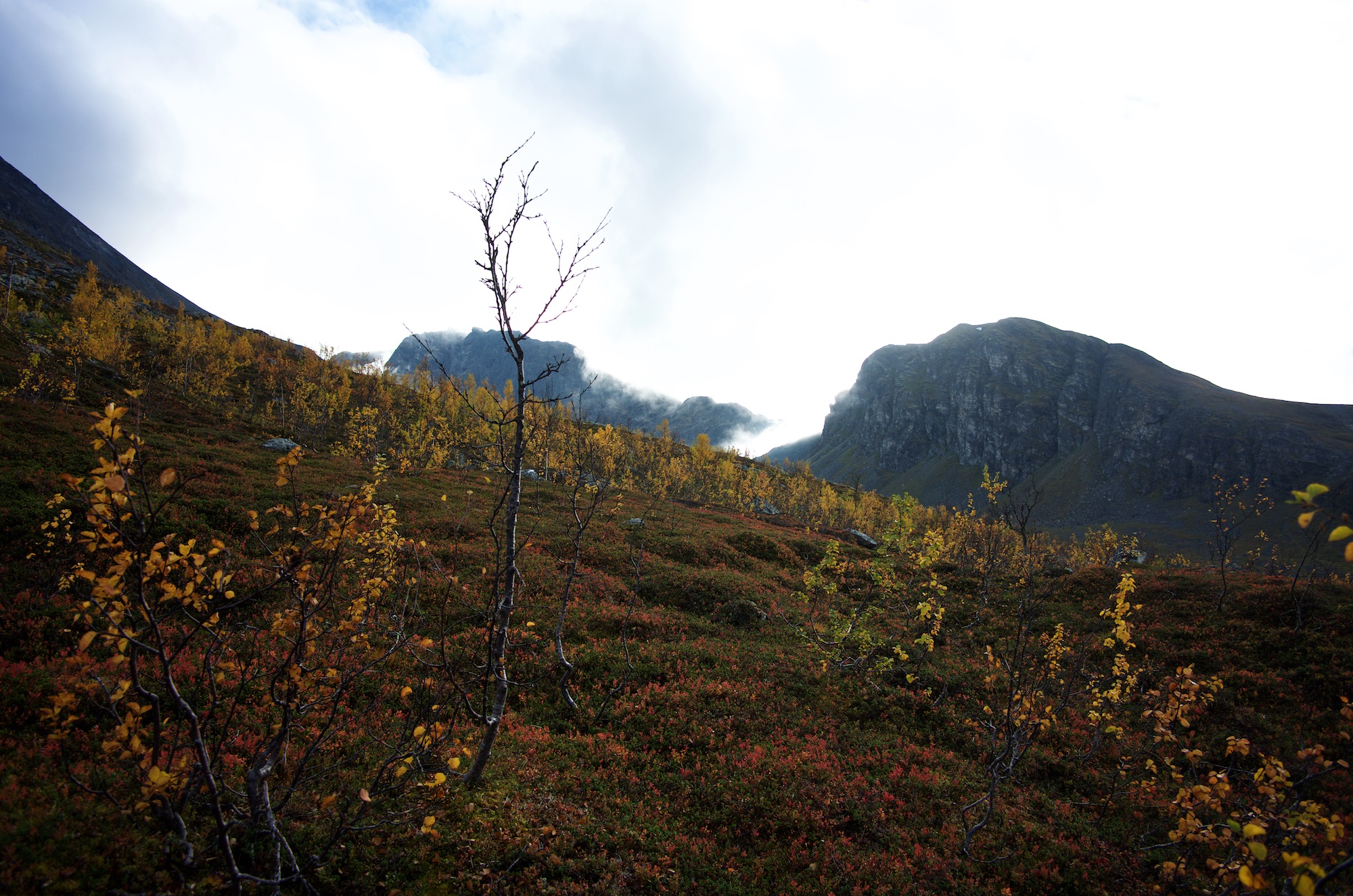 By this point we were shouldering our bikes. The climb through the forest was steep, parts of it very steep. When we hit the grassy slopes above the trees the gradient eased off for a bit, but just for a bit. Even before grass turned to rocks and the landscape got all barren and pointy, we were well into portage territory and there we stayed. 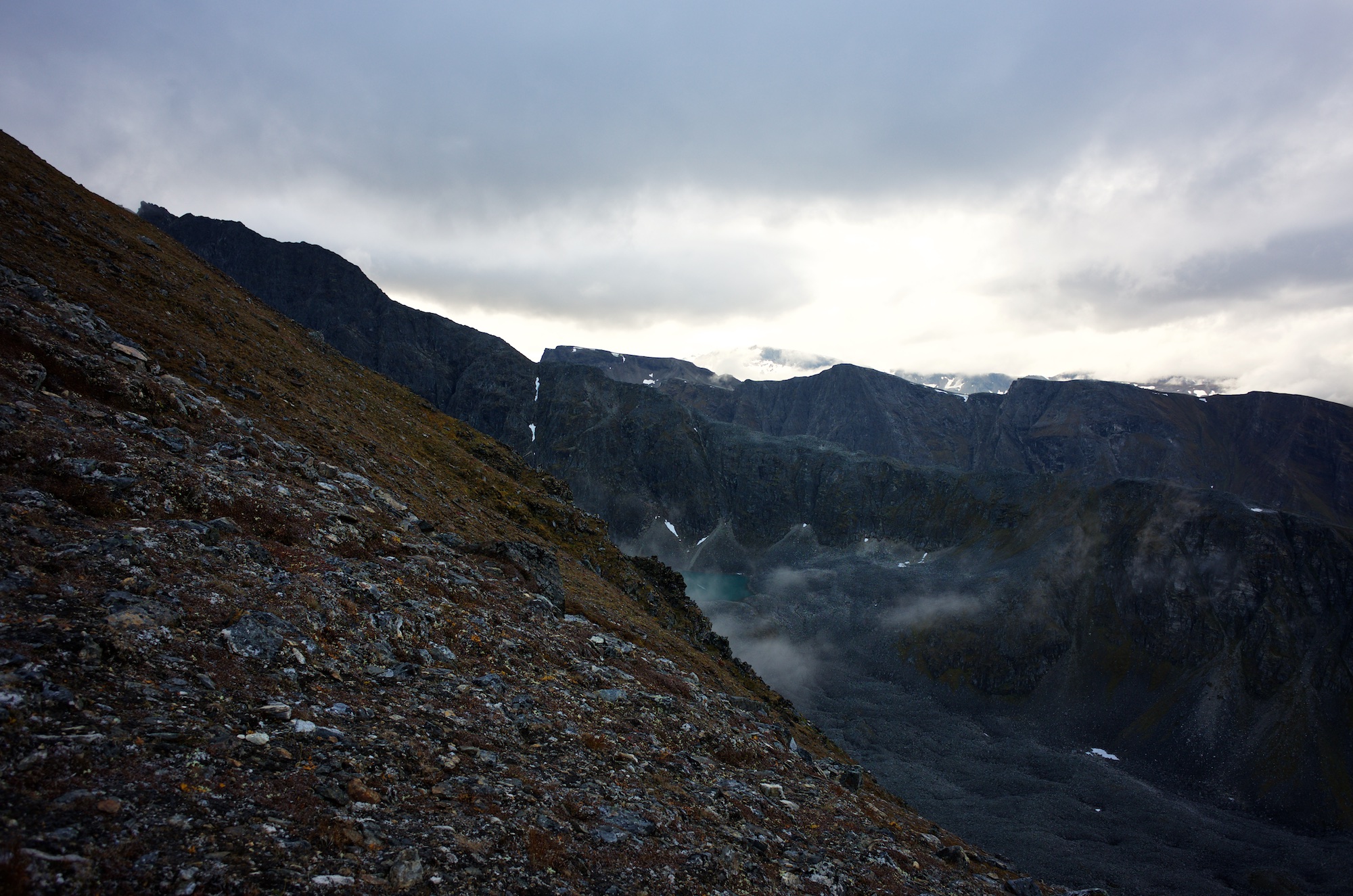 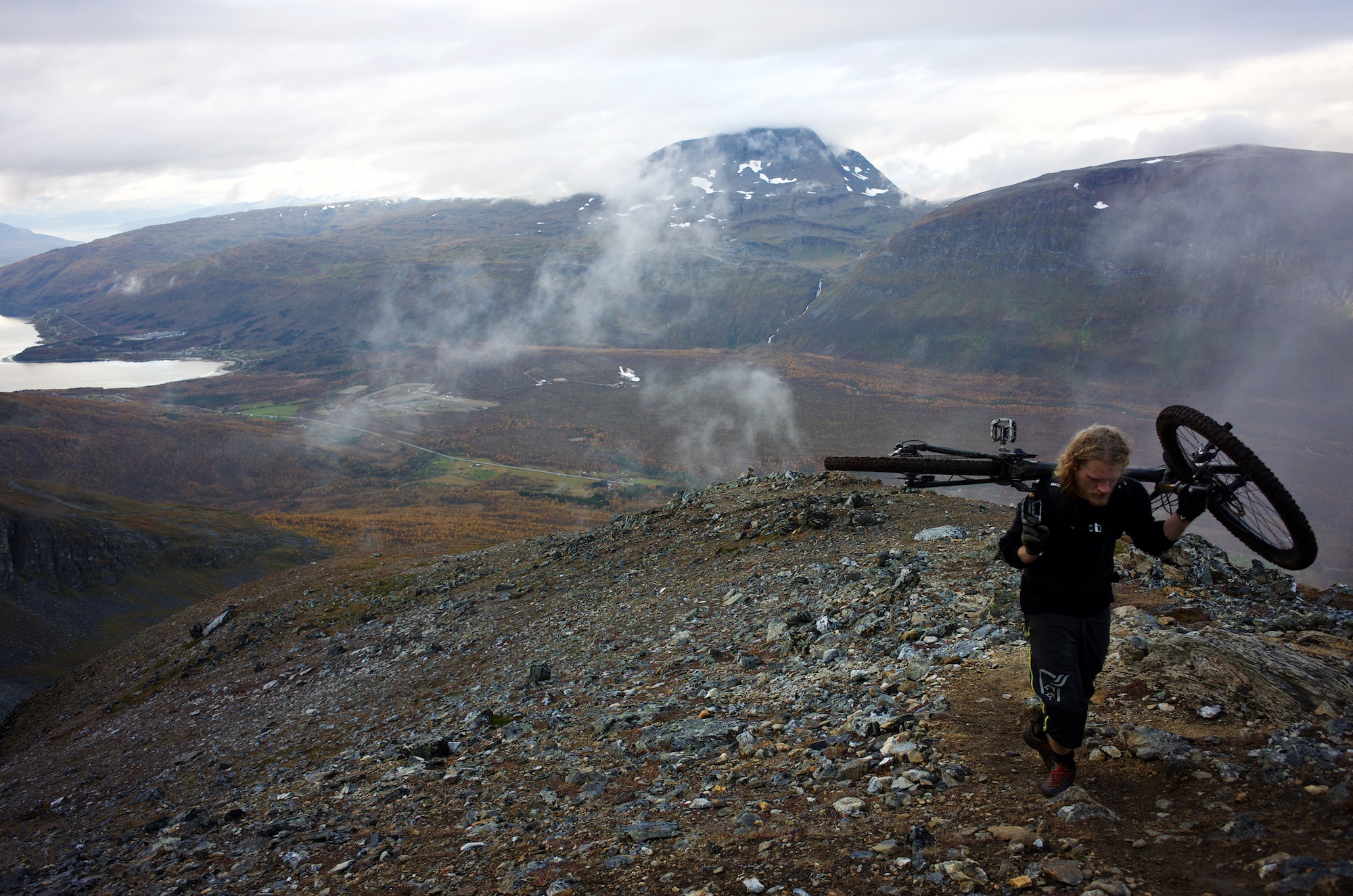 We finally topped out on Middagsaksla, but the ridge went on towards Hamperokken. 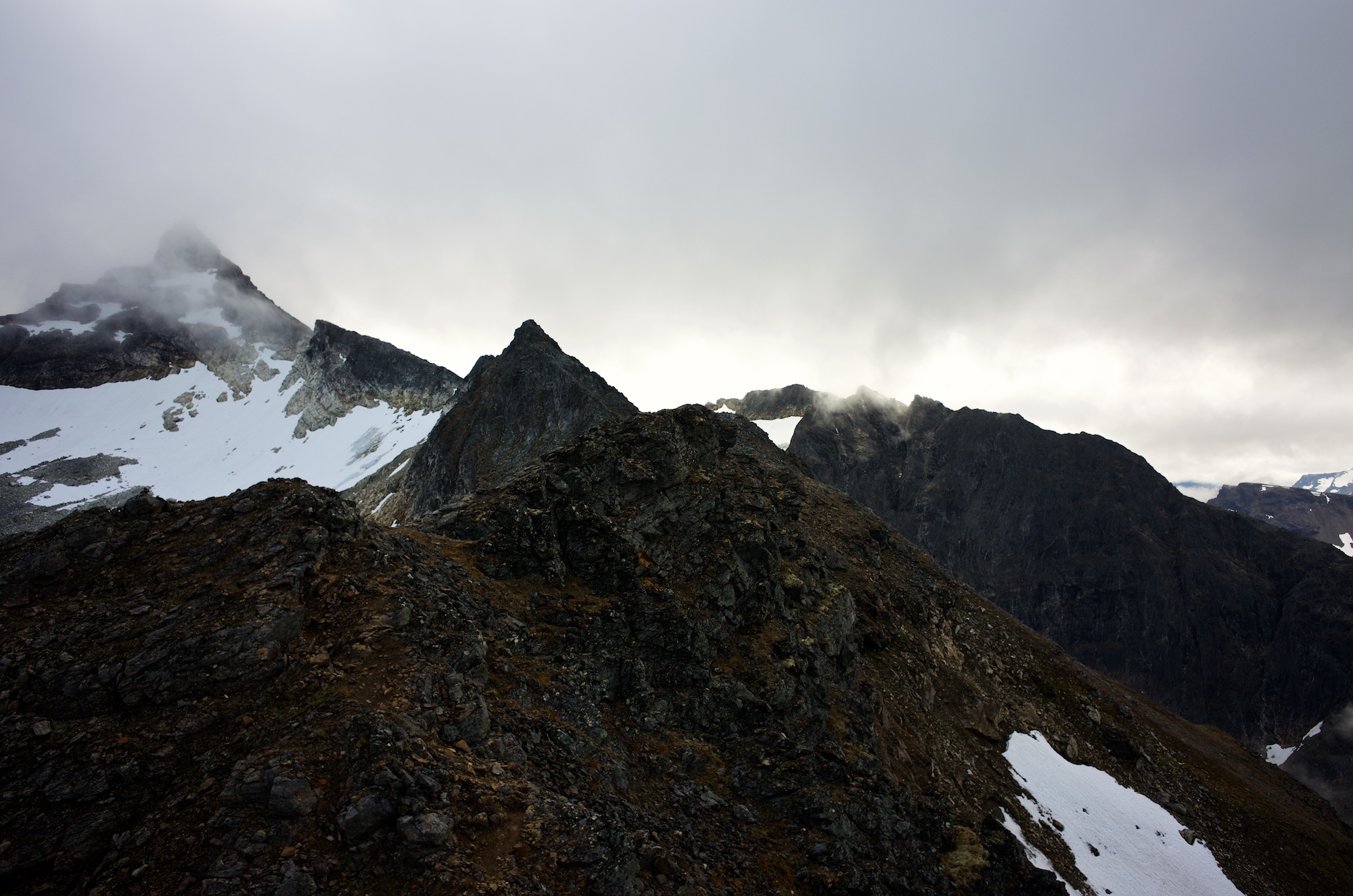 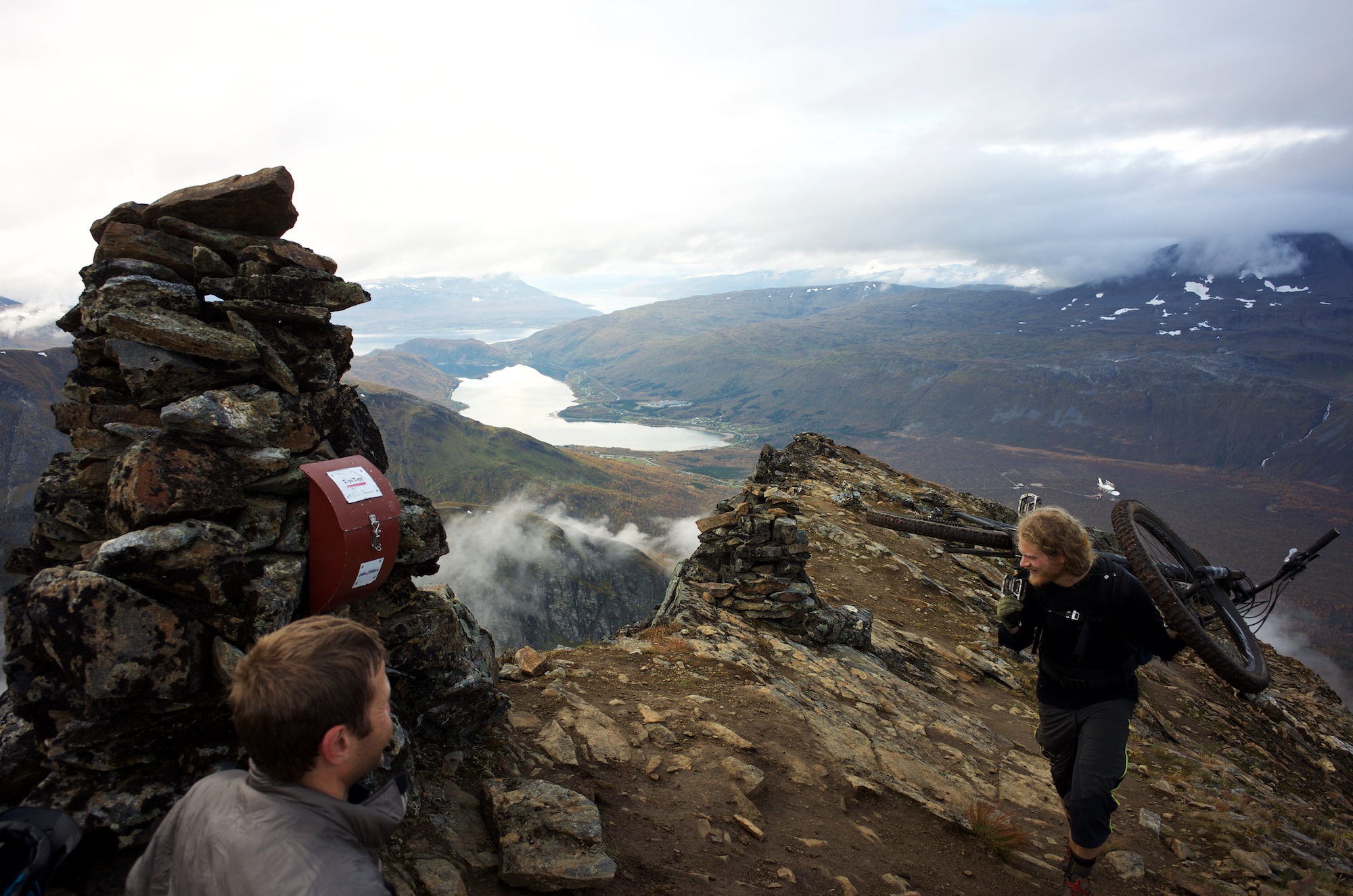 After the mandatory snack at the summit to really get the body cold and stiff, we tentatively started to descend. This one was a mind game for sure, running mostly on riders right of the ridgetop with what felt like almost vertical exposure on our right side and definitely a vertical exposure to our left on the occasions the trail went ridgetop. I'm not saying we did Rampage-level stunts or anything, but I sure felt some butterflies from time to time. 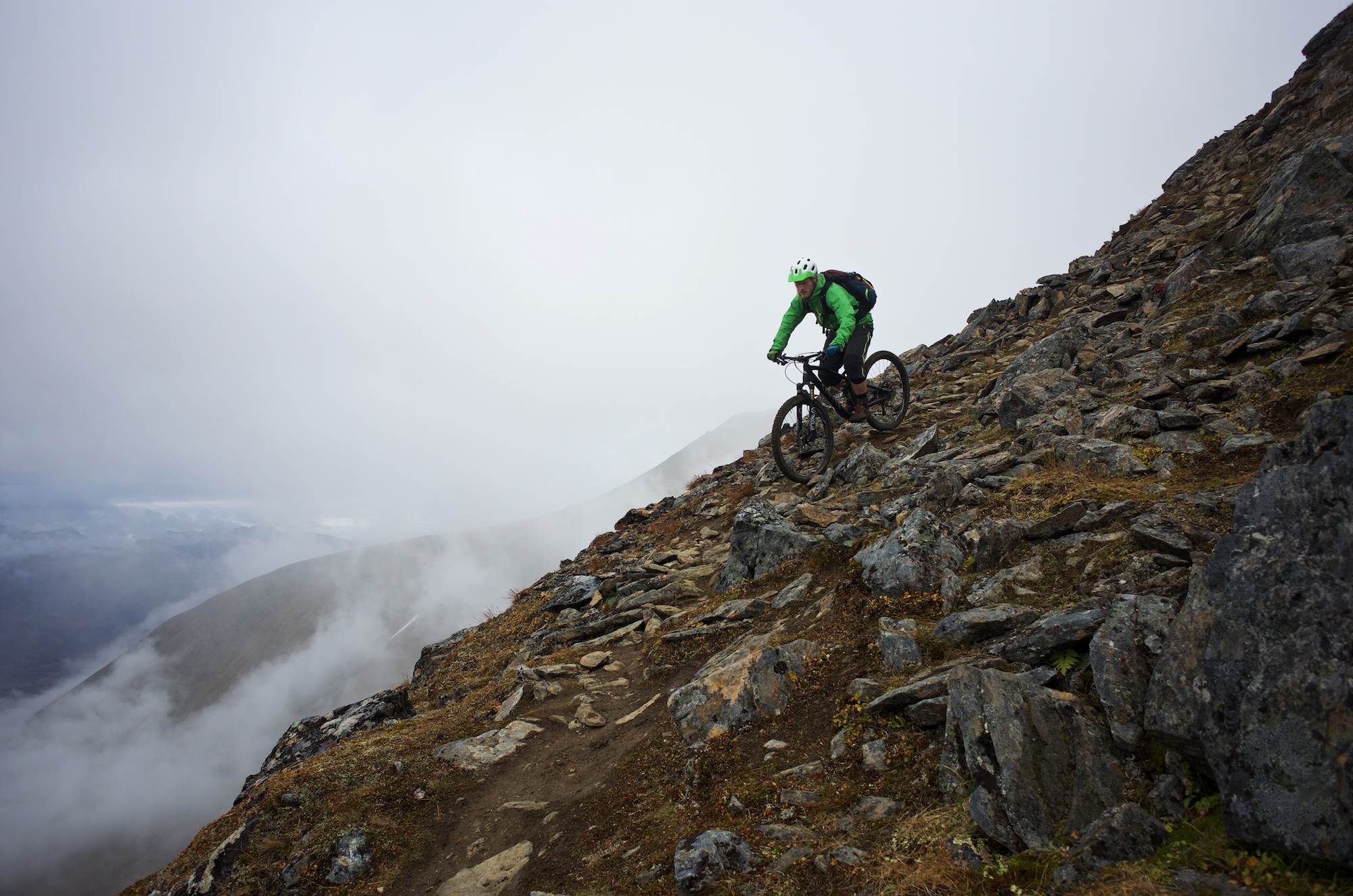 Having safely made it down the rocky bit, exposure eased off and we could let our white knuckles regain some colour. 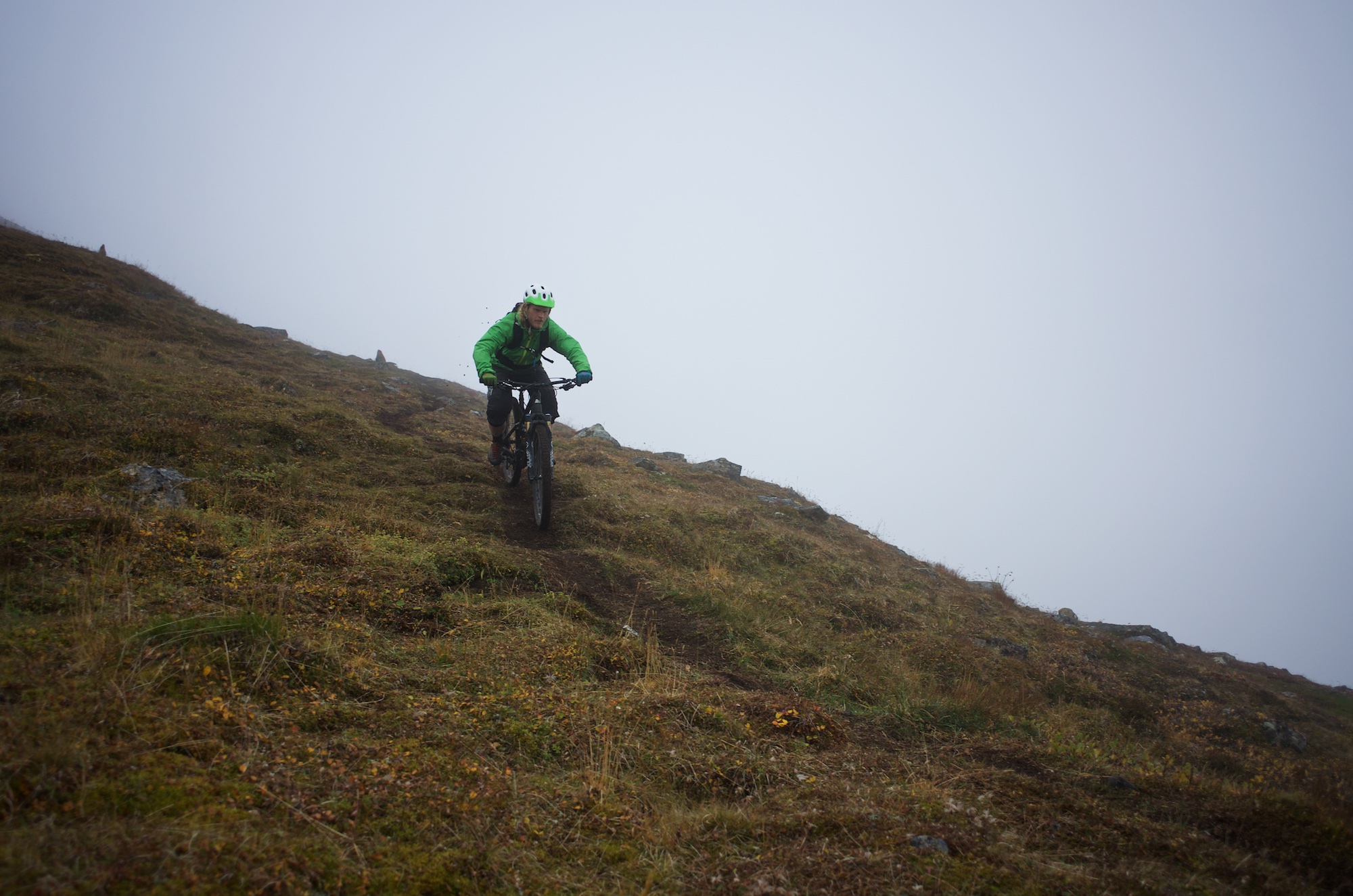 Kenneth managed to find his bike again despite our best efforts to confuse him, and we were three bikers again. 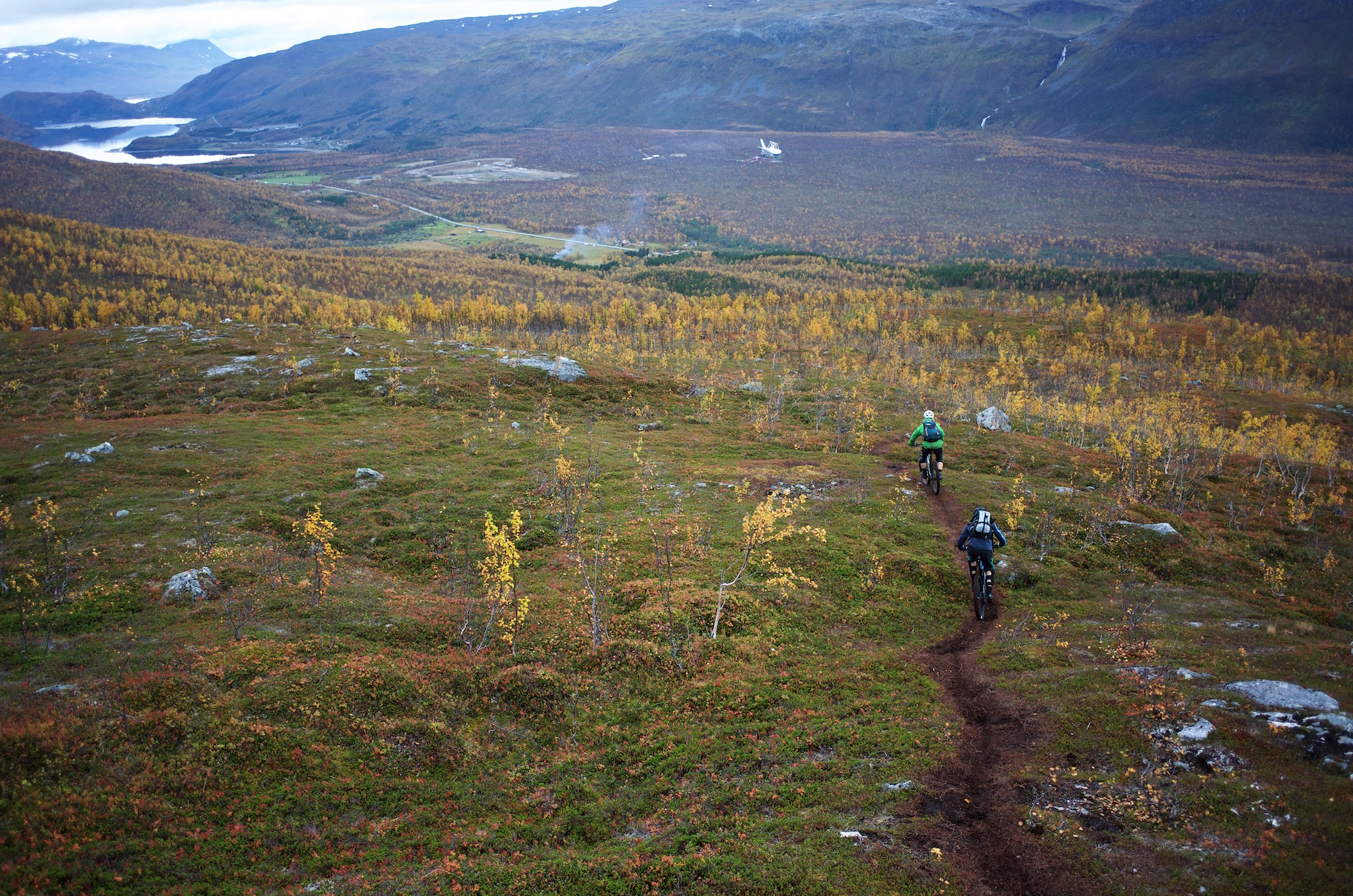 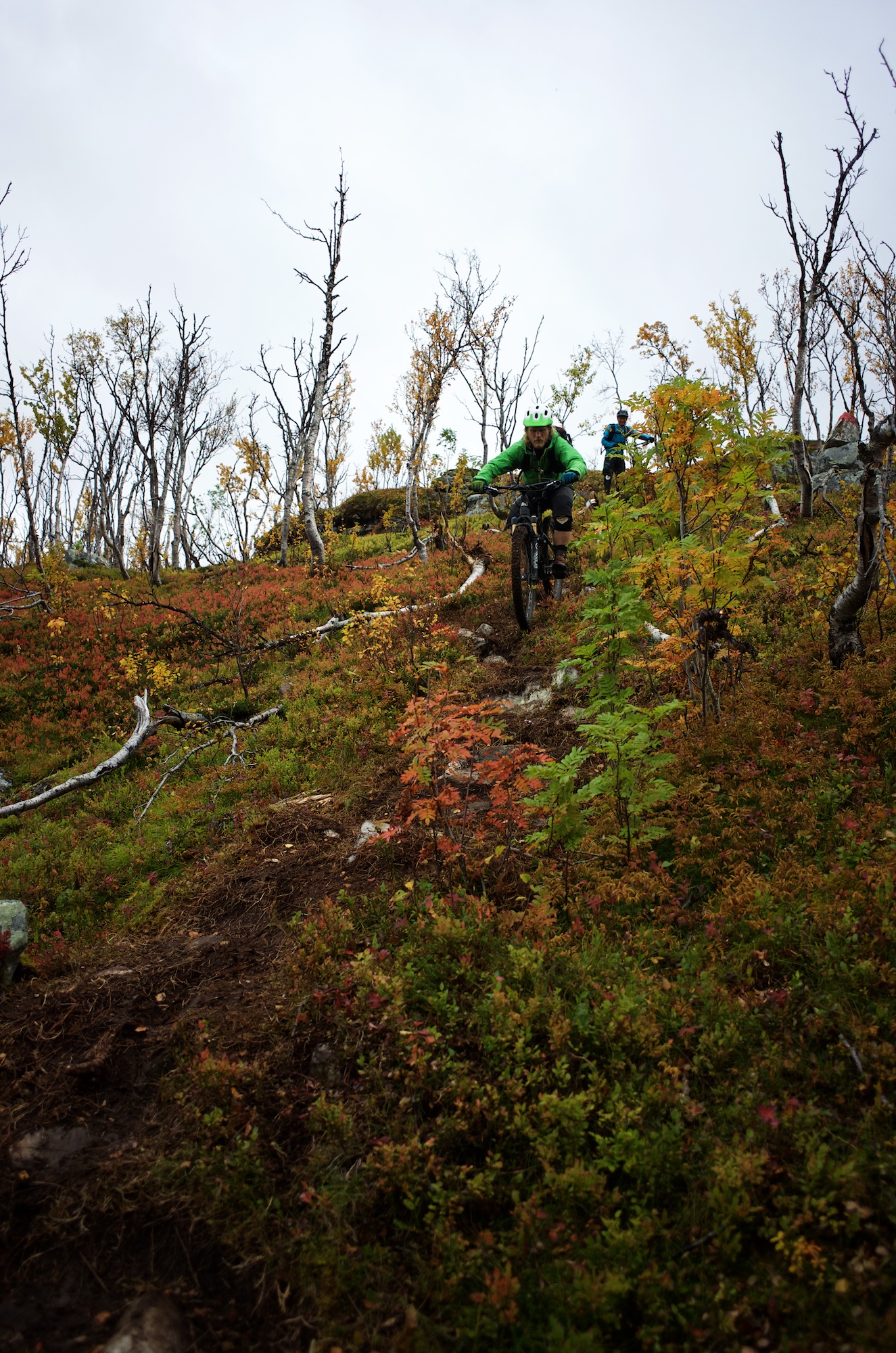 It's funny how riding no-fall-zone kind of stuff shifts perspectives. As soon as we left all the pointy rocks and exposure behind and the trail was buried in the soft heather both I and Gustav started riding a lot of questionable lines, and more than a few times ended up otb and rolling down the hillside. On a more normal day, I would probably have walked a few of those sections instead, recognising beforehand that the odds for riding them out were very slim indeed. 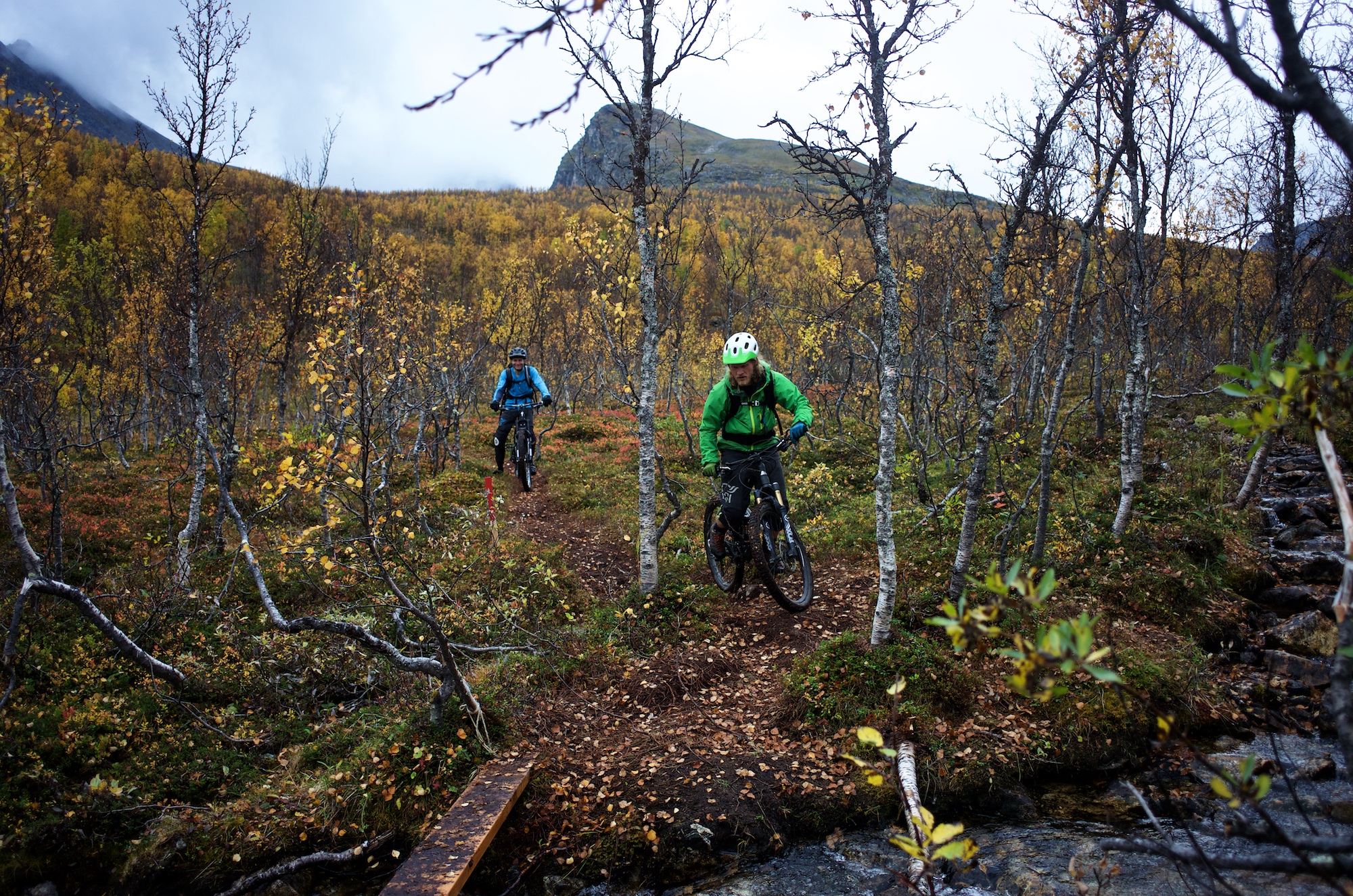 Having made it safe to the other side of the creek we could look back up to our freshly conquered (ahem) summit with the pride of true bikinists. 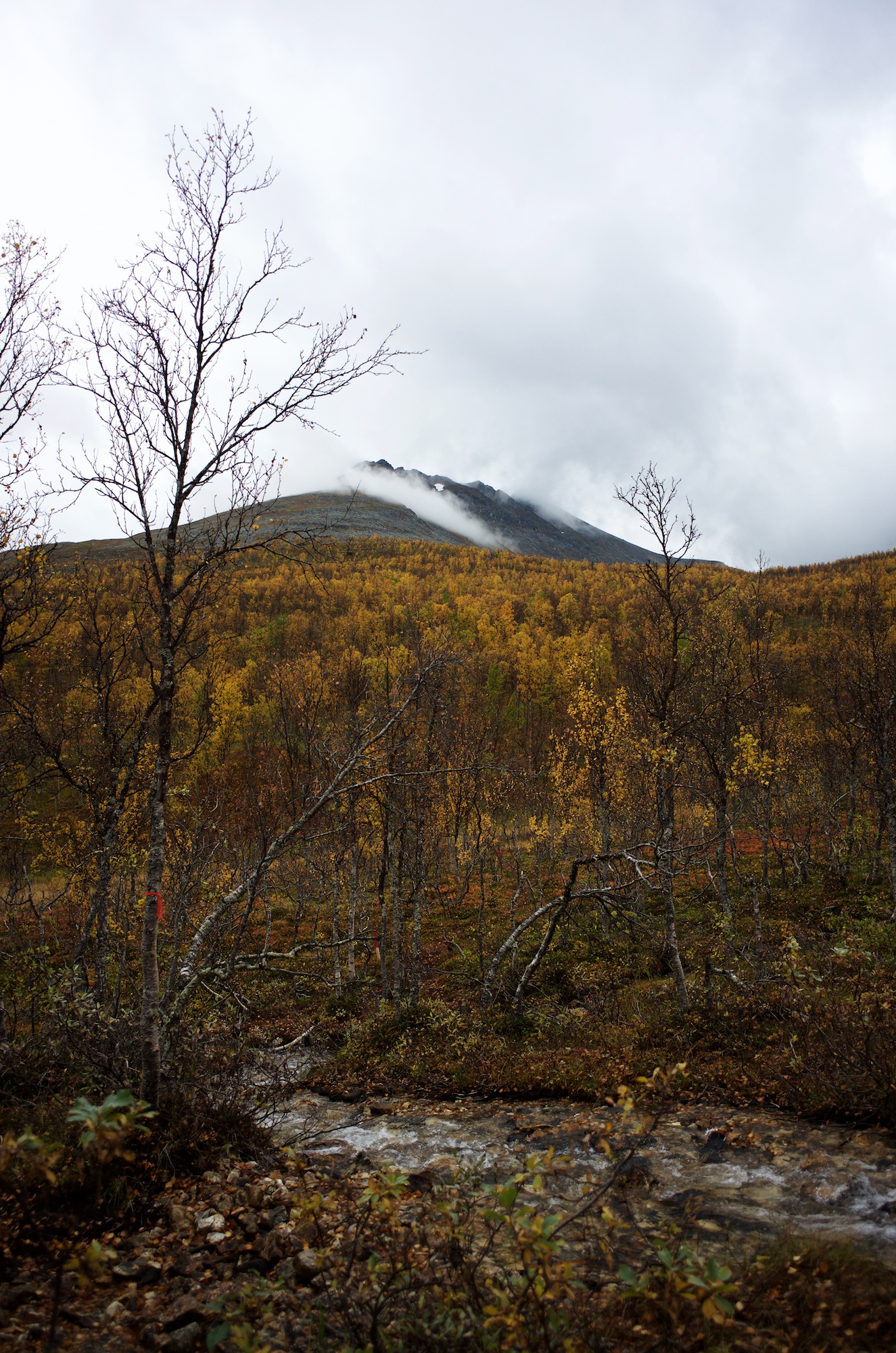 Nothing more to do than enjoy the few last turns in the trees on the way back to civilization, warm coffee and more adventures to come. 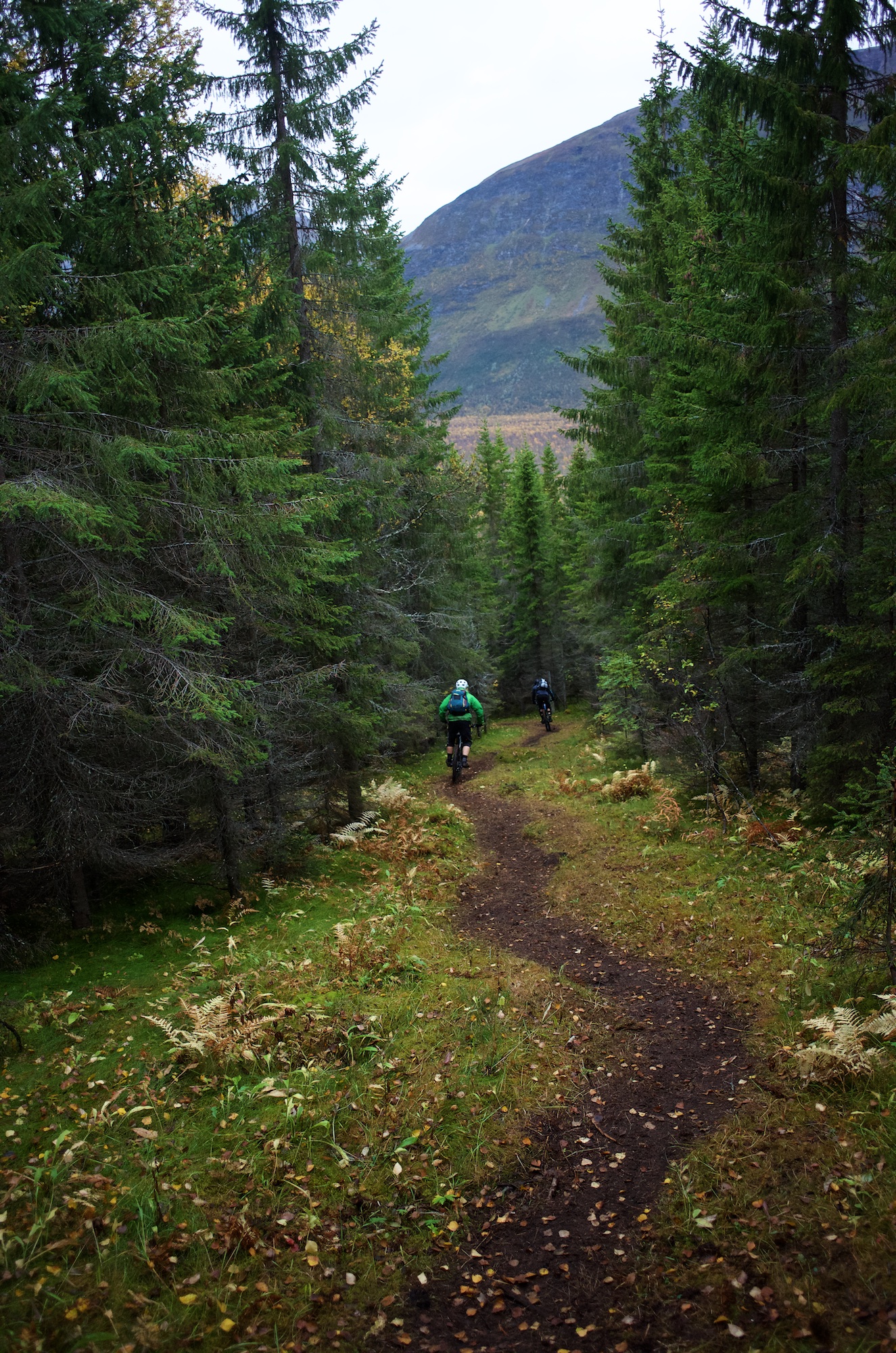