Weather forecasts were gloomy to say the least, right in time for my summer vacation. Never mind, it is par for course in northern Norway anyway, and who cares about weather when there are new toys to be tried?
Yes, I accidentally built up a new small bike to replace the Orange MIII. A tiny bit of squish was in order for my now old and broken bones, and I got a silly price on a Trek Ticket S from the good guys at Foss. It turns out the R-Dog signature stars and stripes paintjob was not a big seller up here, and I can see that. Even for me it was a bit too much freedom, but no match for a few cans of yellow plasti-dip.

Kit is mostly just taken off the Orange, and is the usual mix of Saint, Zee, XTR, XT, Hope, Renthal, Thomson and Chris King that has evolved over years of wear, tear and crashes. 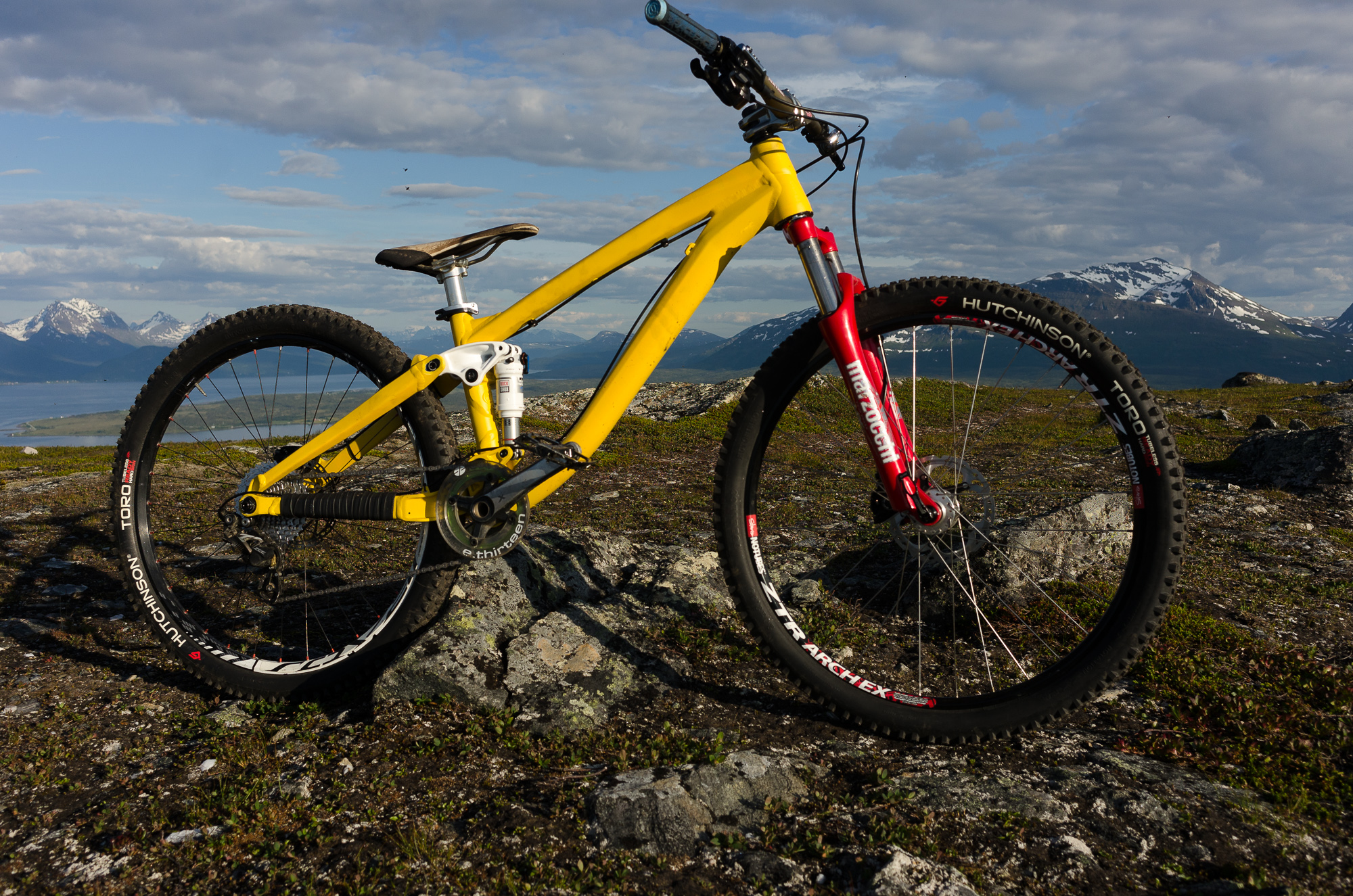 We decided to try to sneak out before things got wet, and were off earlyish for once. The goal was Blåtinden, also called Sleeping Soldier due to its distinctive profile.

After a few hundred meters of warmup the climb goes straight up a ridge and we were off our bikes pushing in no time. Most of the climb was a push/carry except for a few sections of more undulating terrain. 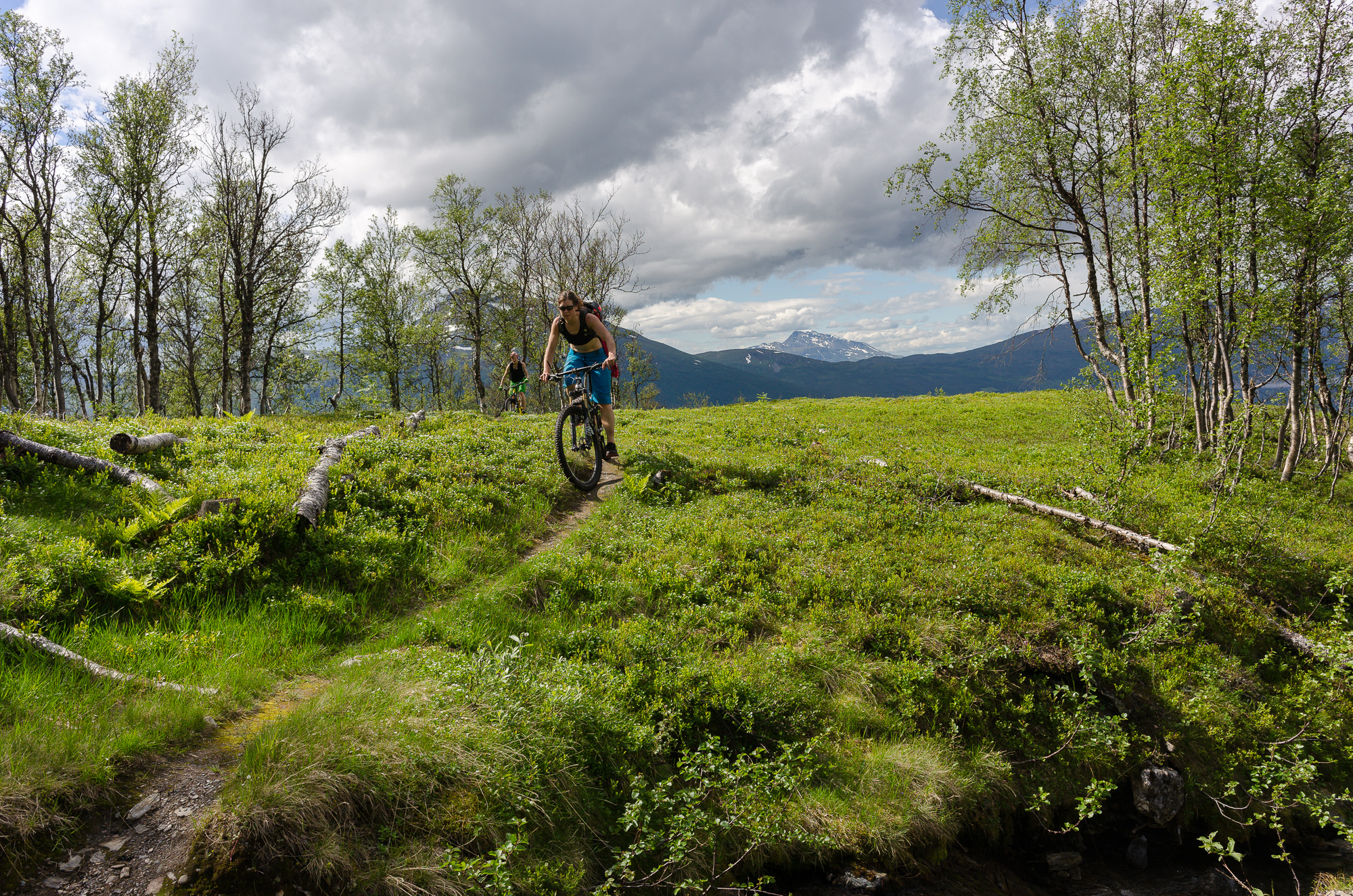 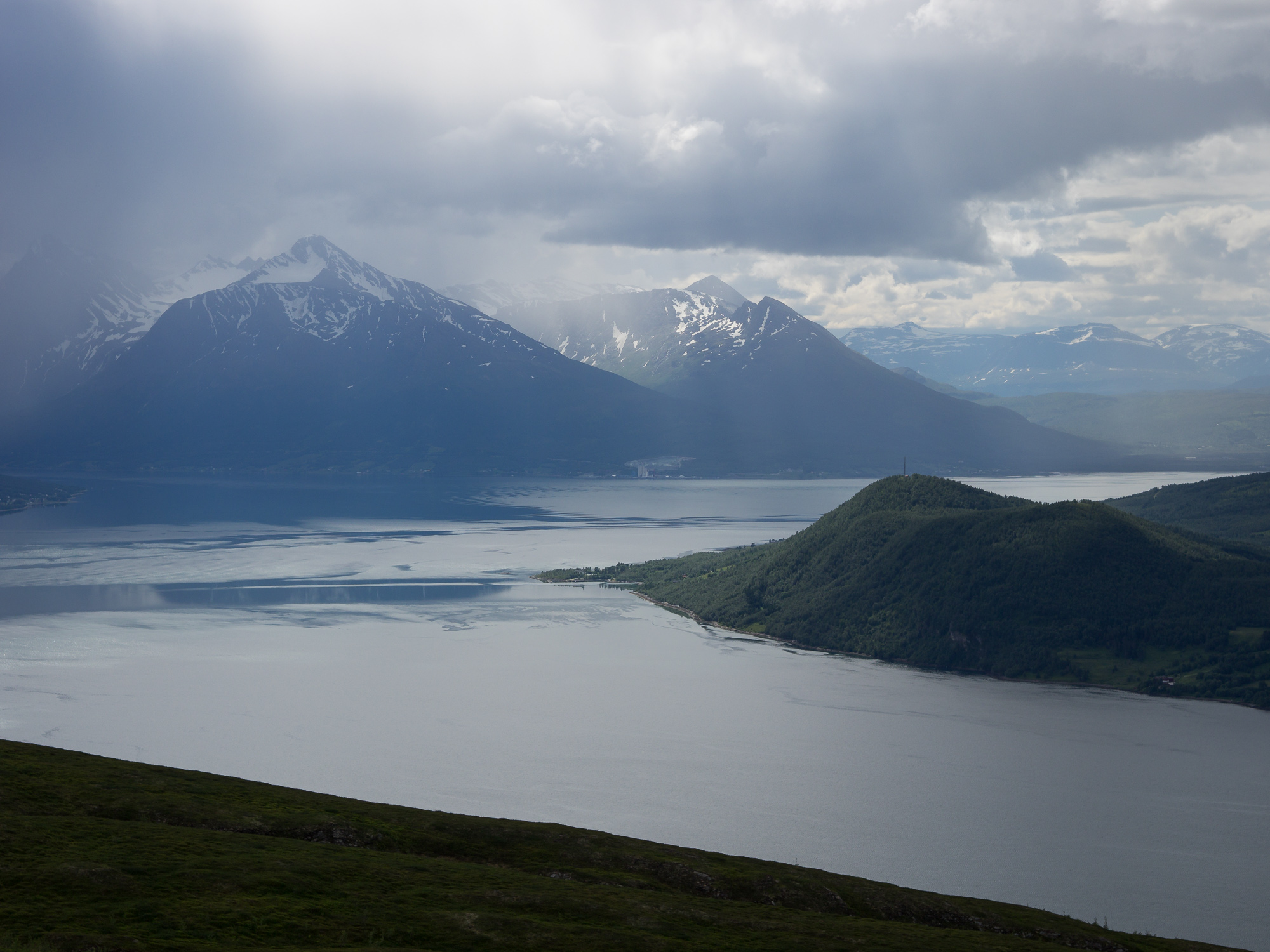 Half way up to the summit there is a short descent before entering more rocky terrain, which might possibly also be less bike friendly. Given the weather closing in and that we were really out for a shorter ride anyway we pulled the plug and headed down again. 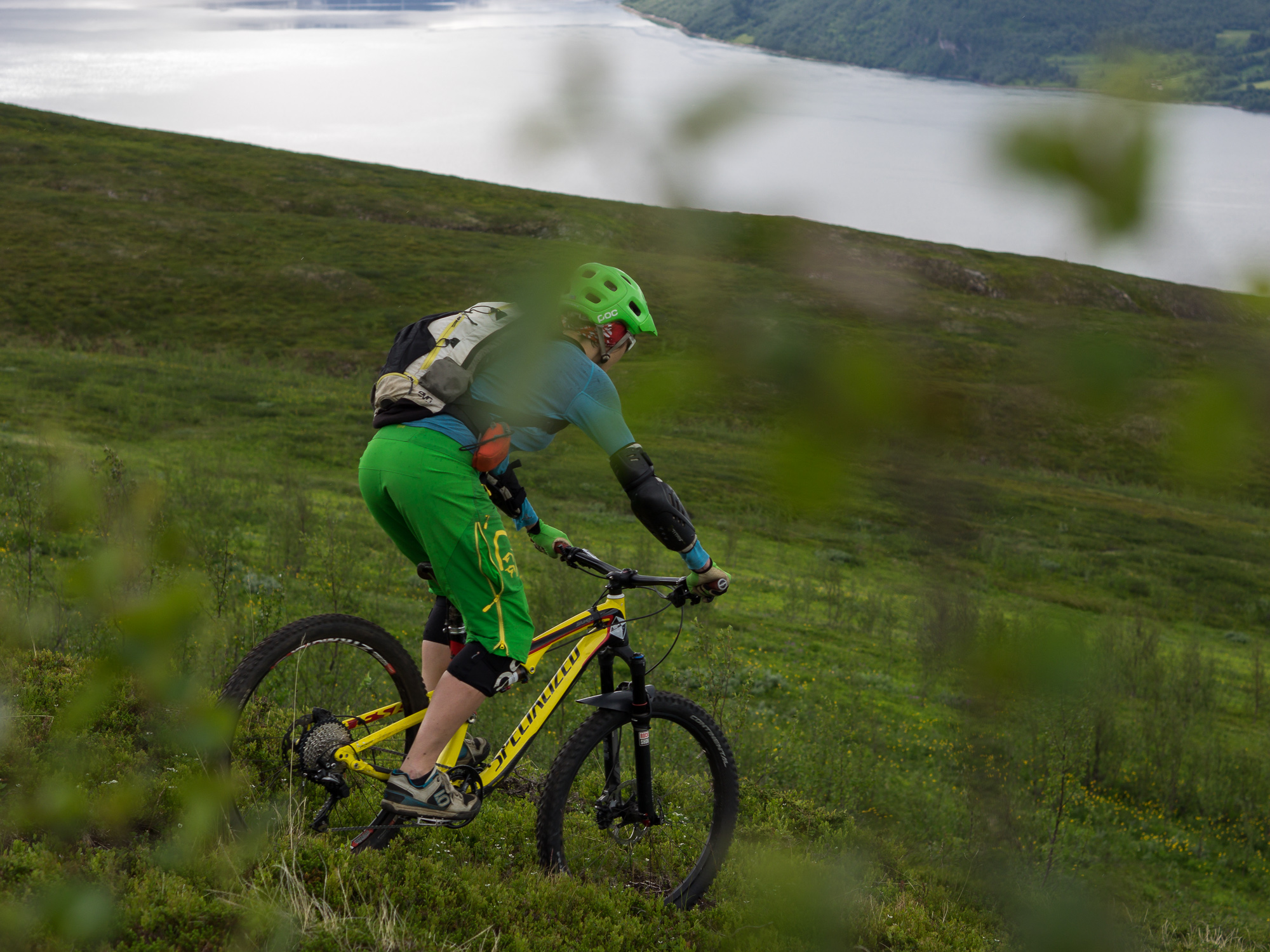 The trail was not very rocky, but still hard to ride fast due to its many many tight twists and turns. This is one of the less traveled trails in the area, and it shows. 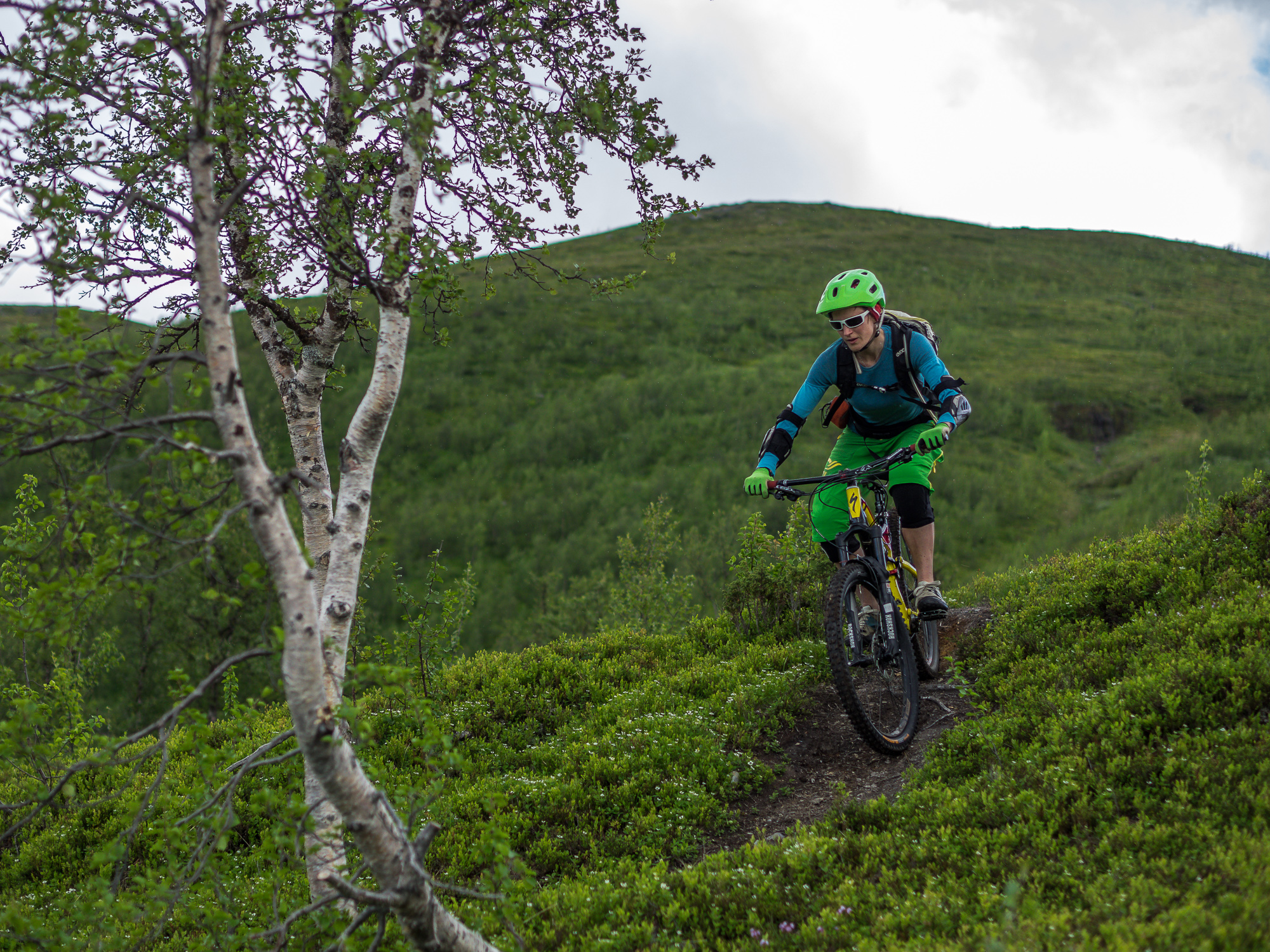 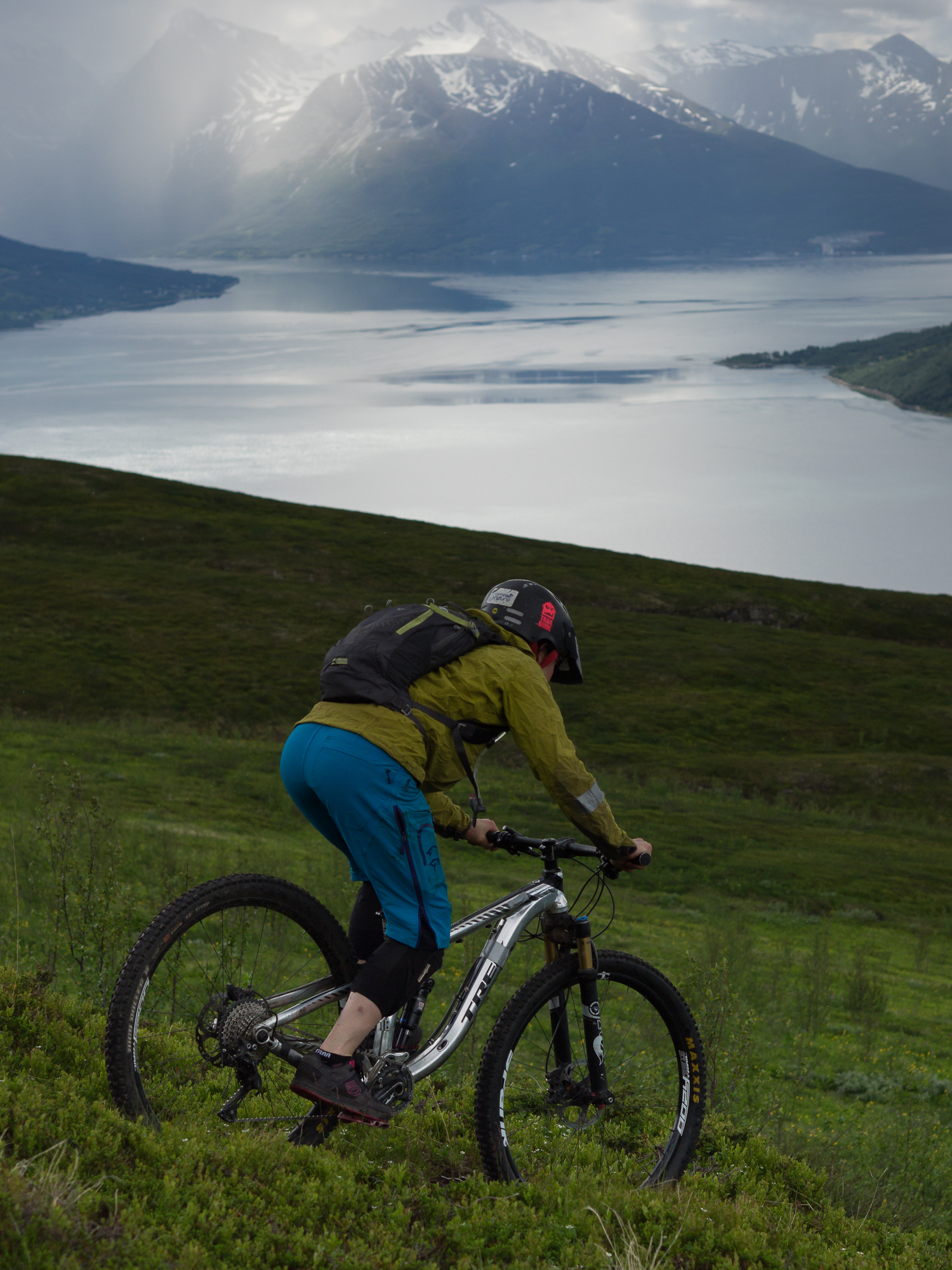 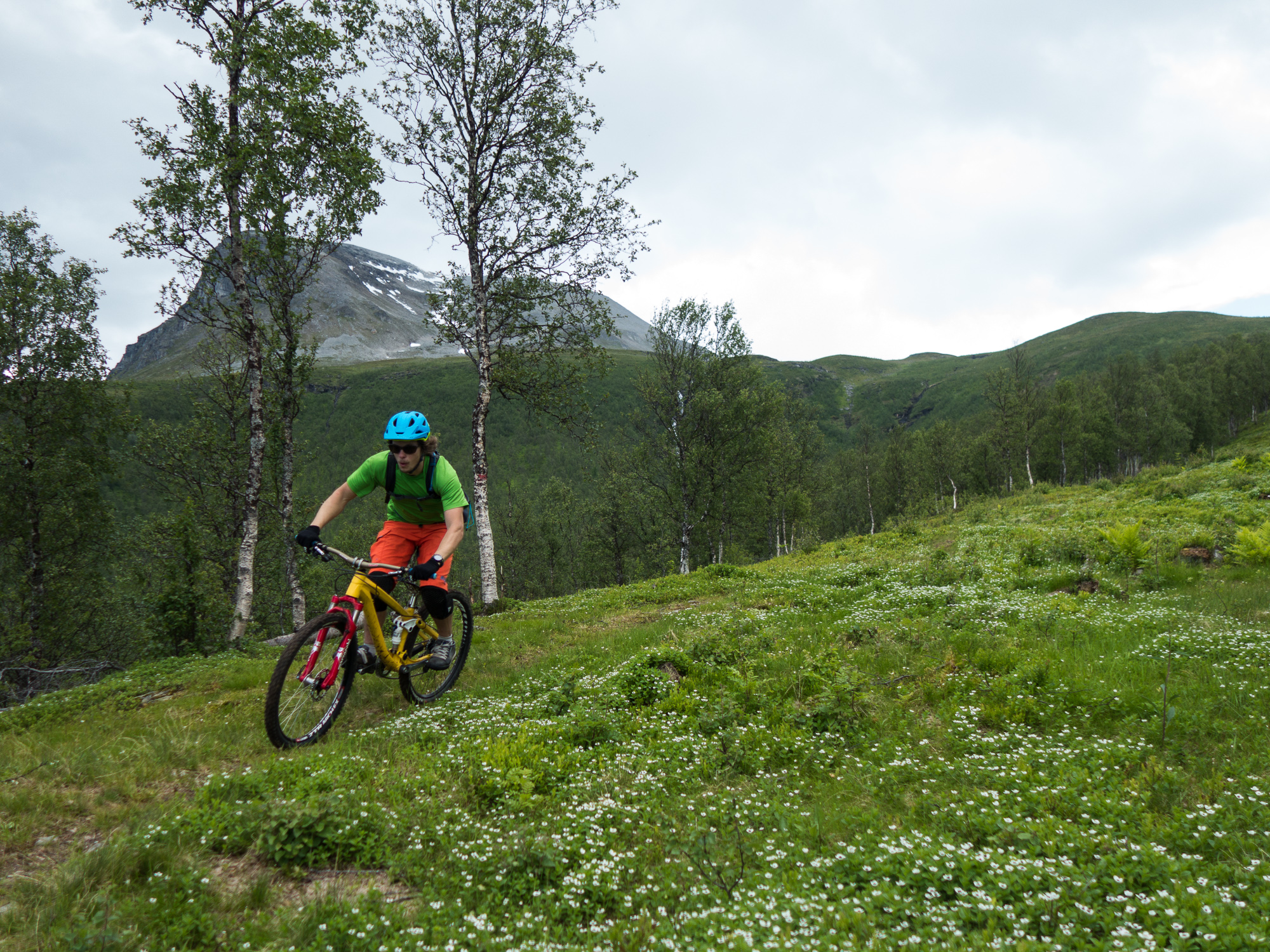 There are no big cruxes or really hard parts, but the constant gradient and hectic turning still made for happy and tired bikers at the bottom.

The new bike was really in its element with its sharp and snappy handling. 100mm of (very progressive) travel feels just right to take the worst of impacts and boost grip without loosing too much directness and pop. Hutchinson Toro might be nice and fast, but proper scary as a front tire on moist surfaces, just as the tread suggests. As a coincidence the surface was moist and I got scared, more than once. Maybe I should just go the safe route and put a Minon 2,3 on there... 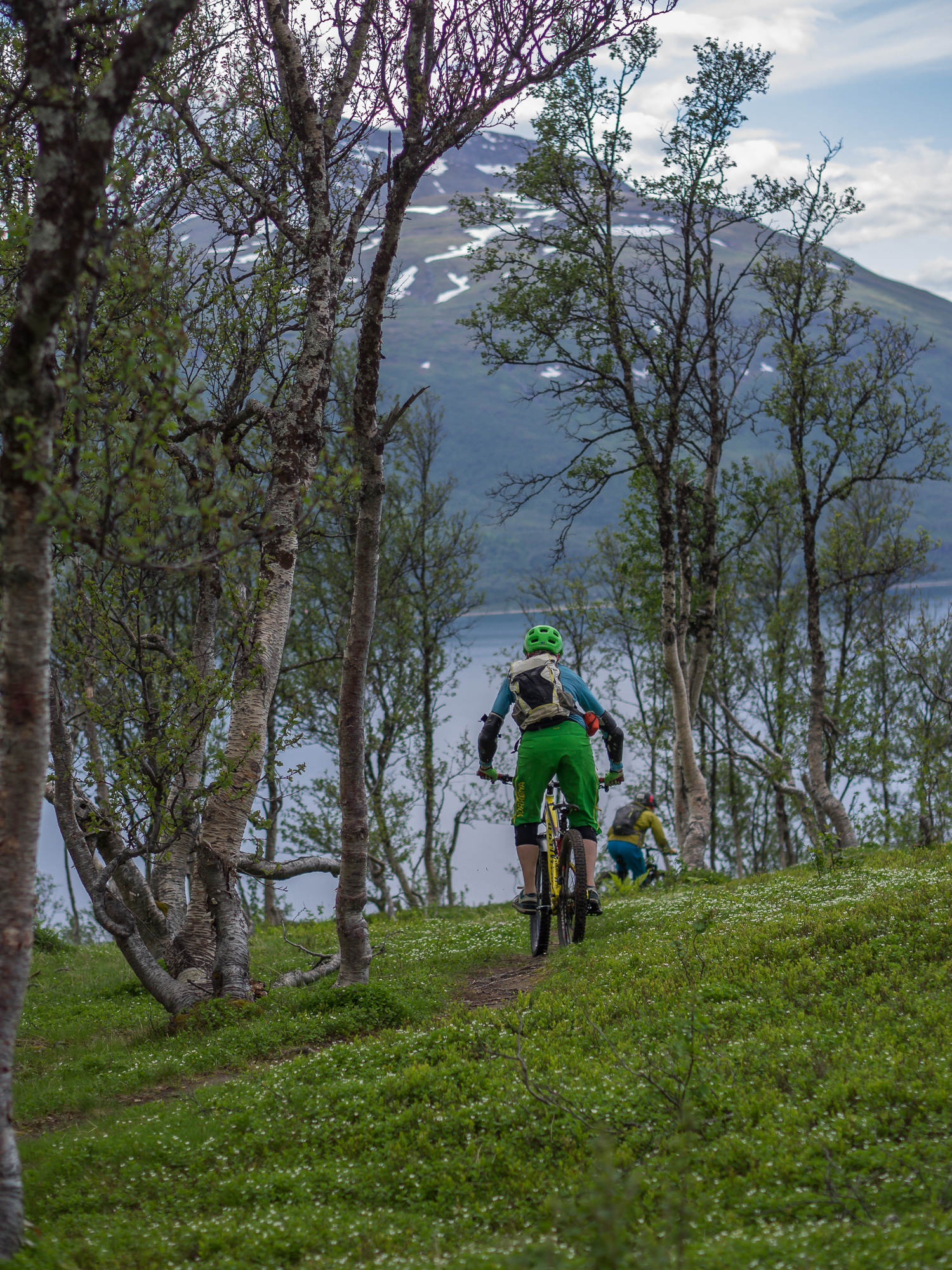 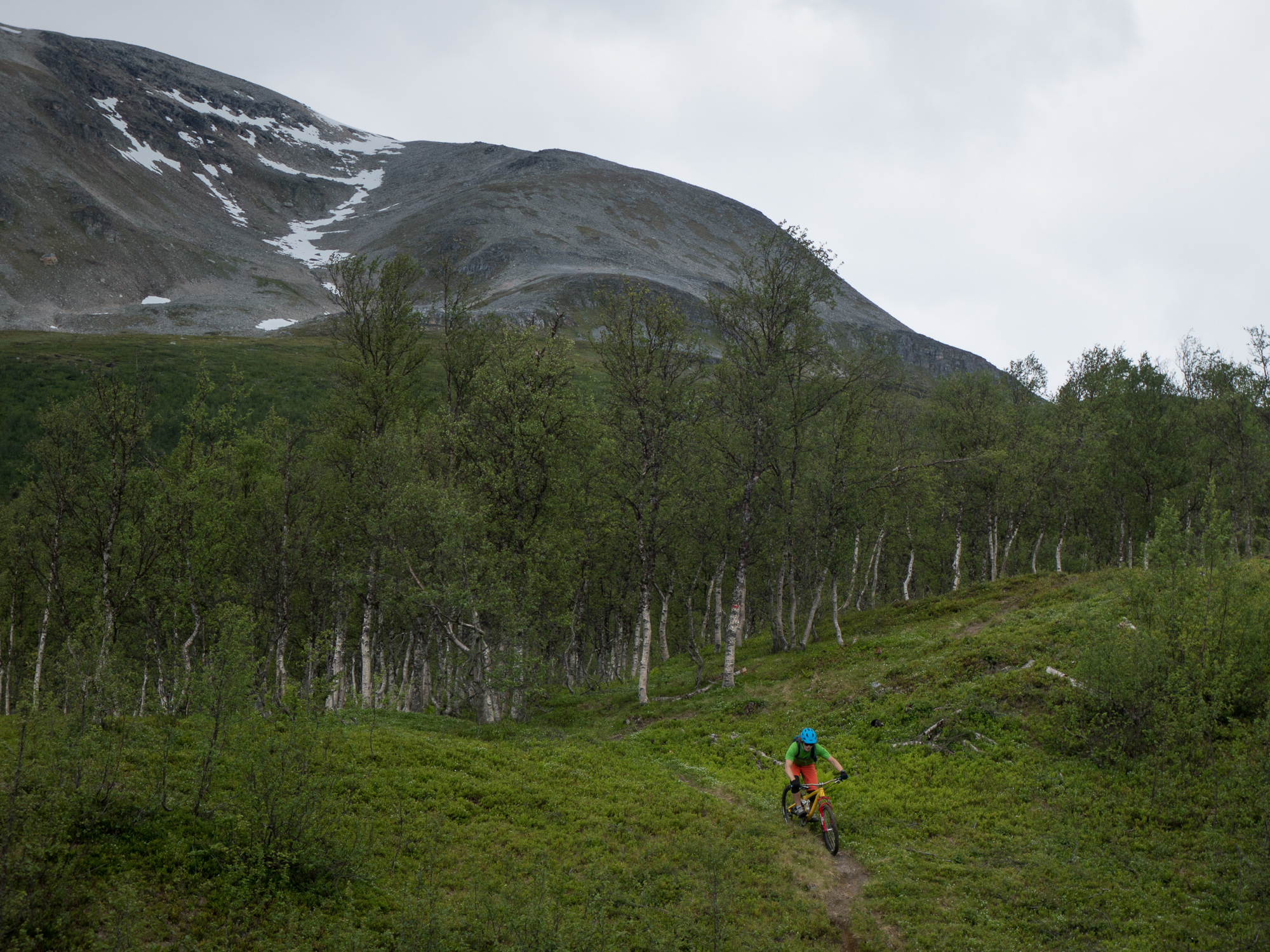 The weather decided it would just bark and not bite for once, and even the ones who left their rain coats in the car (whoops, that would be me) made it down dry and warm. In fact it did not even rain on us when we packed the car or chilled out at the trail head, very strange indeed. In the days since though, things have gone back to normal with rain falling down when expected to do so. We are in northern Norway after all. 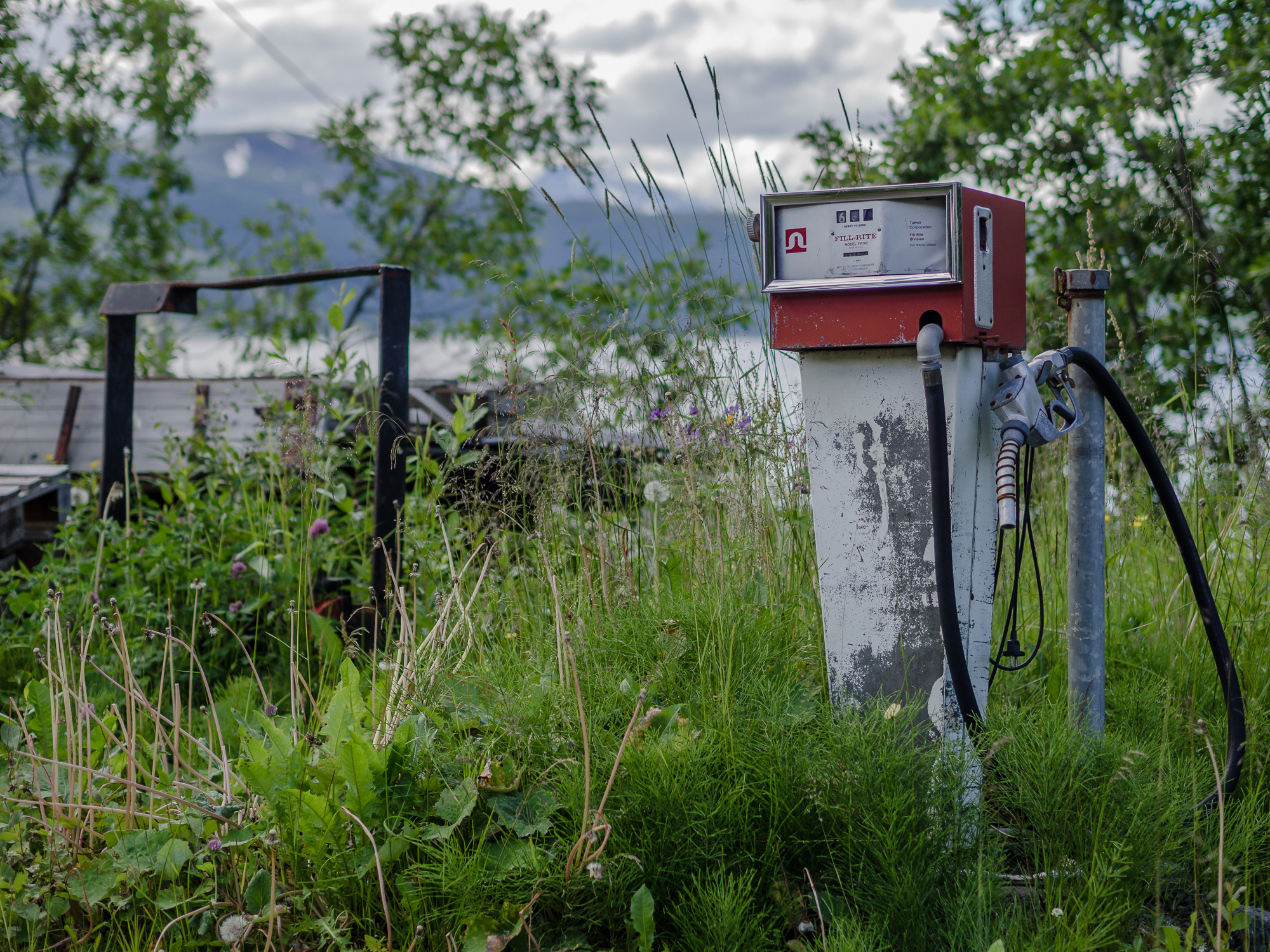 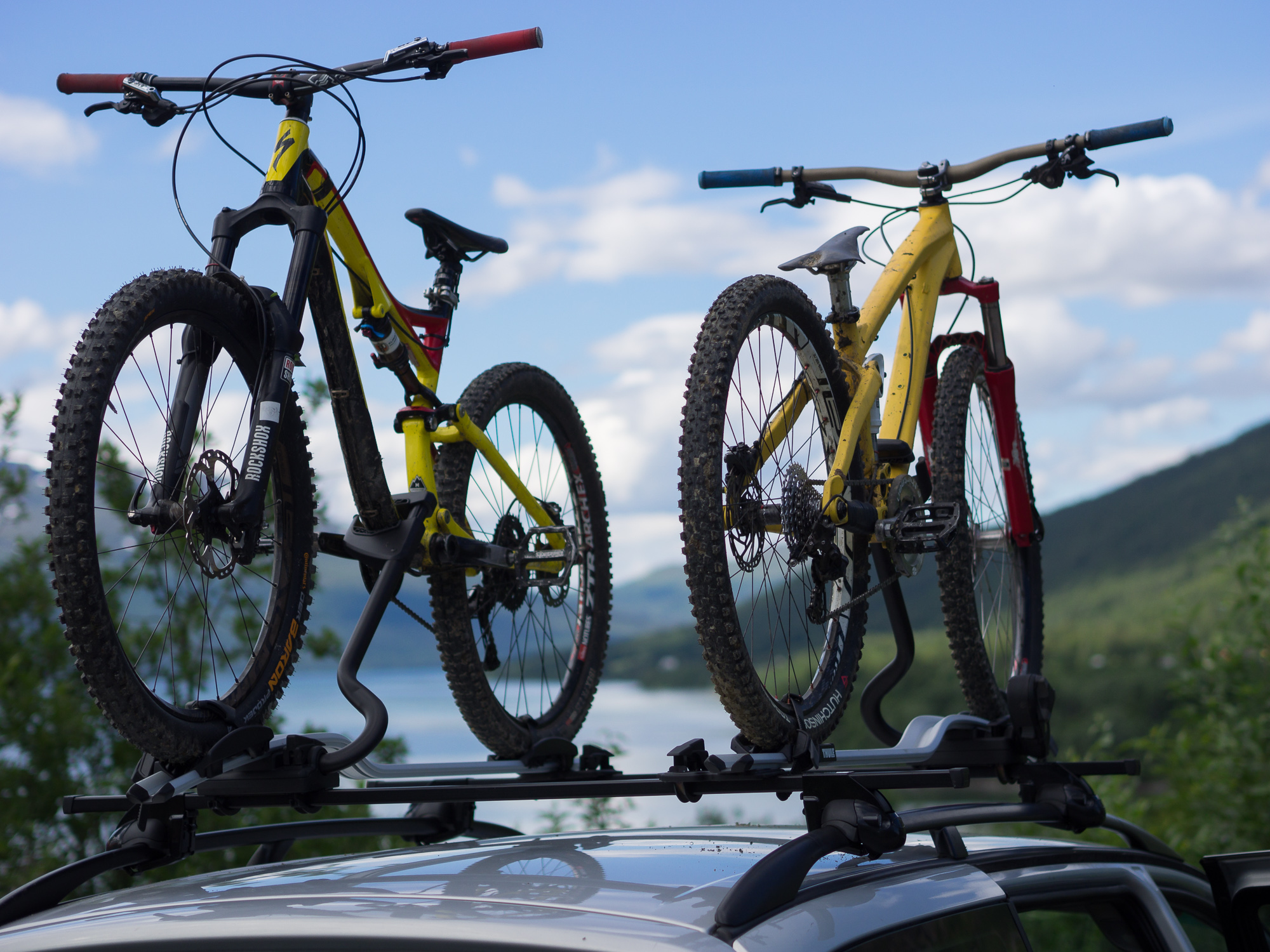