I guess most of my readers are familiar with the "fun scale" (otherwise, Google is!), type 1 and type 2 fun and so on. I love the concept, and think it is applicable to trails as well.

As I see it, type 1 riding is flattering, it makes me feel better than I really am. Picture good sight lines, hero dirt and loam, corners with nice support, and features such as jumps and drops have good landings and nice roll outs. Cheap thrills, and great fun when doing it but won't make a good story.

Type 2 riding on the other hand makes me realise how unaccomplished as a rider I am. This kind of riding often includes endless rock gardens, sustained steep, loose sections that end in an exposed and really tight switchback, off camber corners with pointy rocks sticking out in all the wrong places and so on. Basically everything that makes me awkward on the bike and/or give very small margins for error.

Around Kattfjord both kinds can be had, but especially type 2 is there in abundance.

For those who like their tight couloirs to end in a big apron and huge powder turns I can recommend Tverrfjellet. 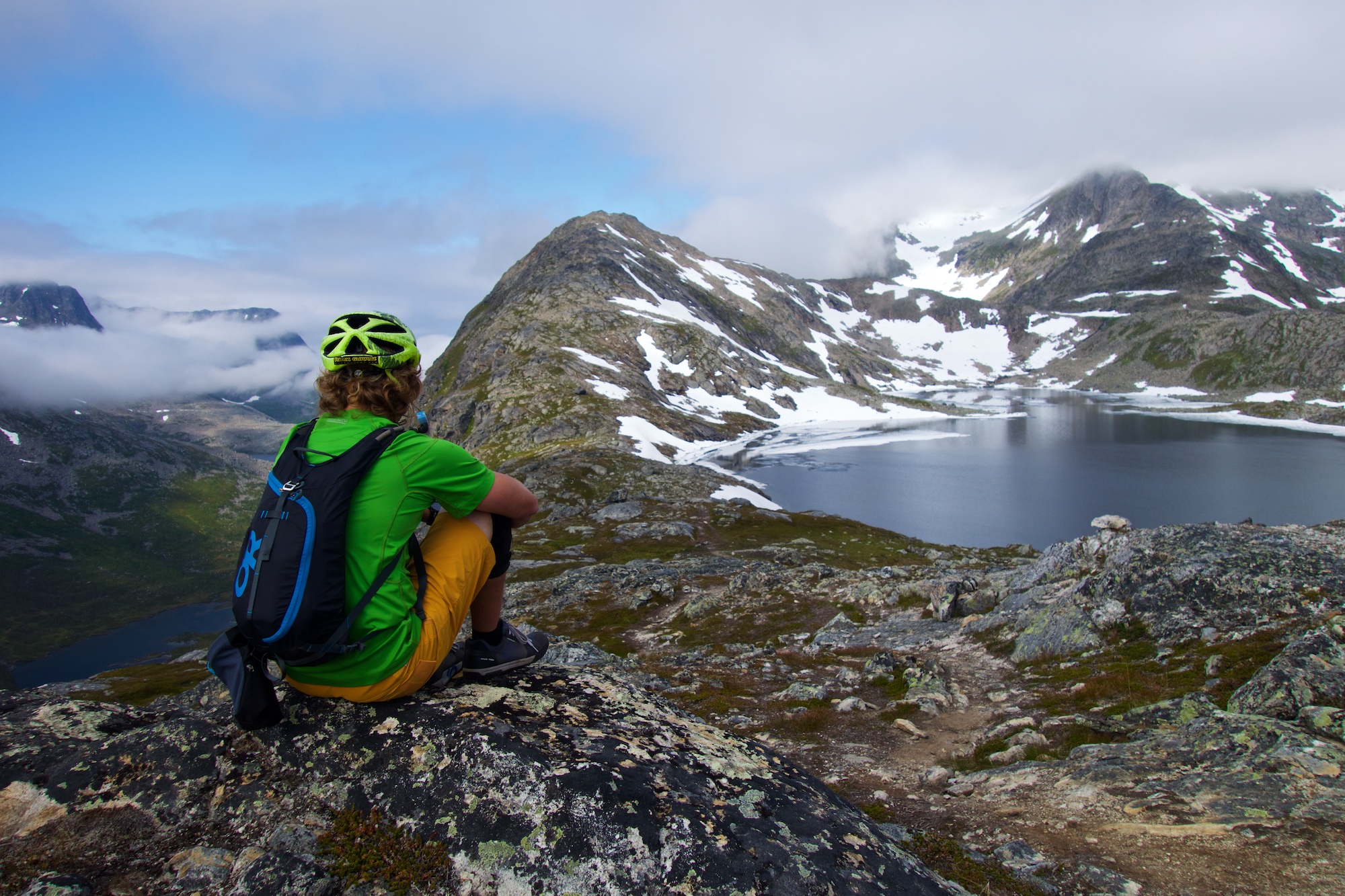 The climb is like most climbs around here a push with sprinkles of carrying thrown in, about 600m to the very summit. 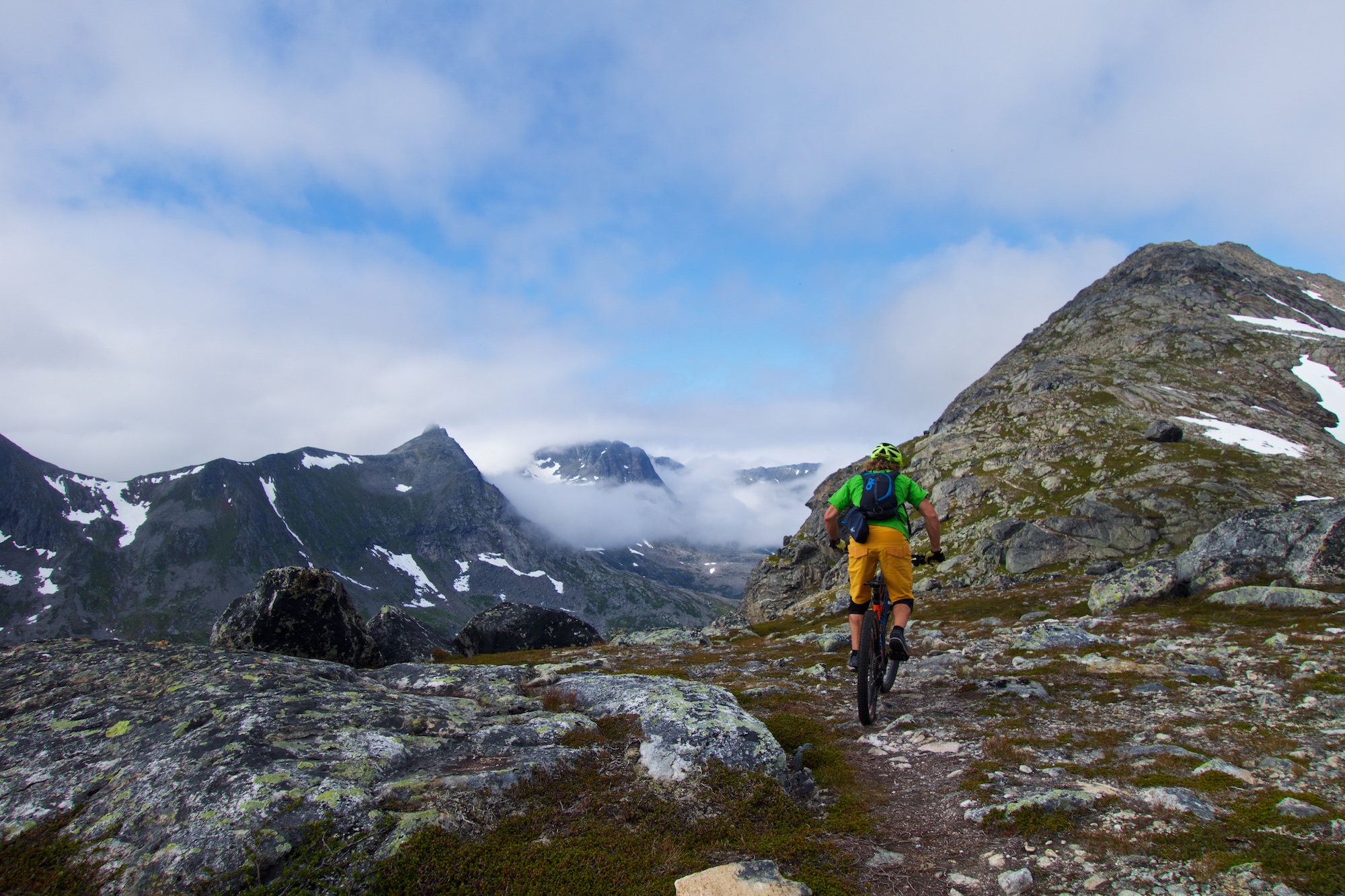 Almost all the way down is rideable to various degrees. 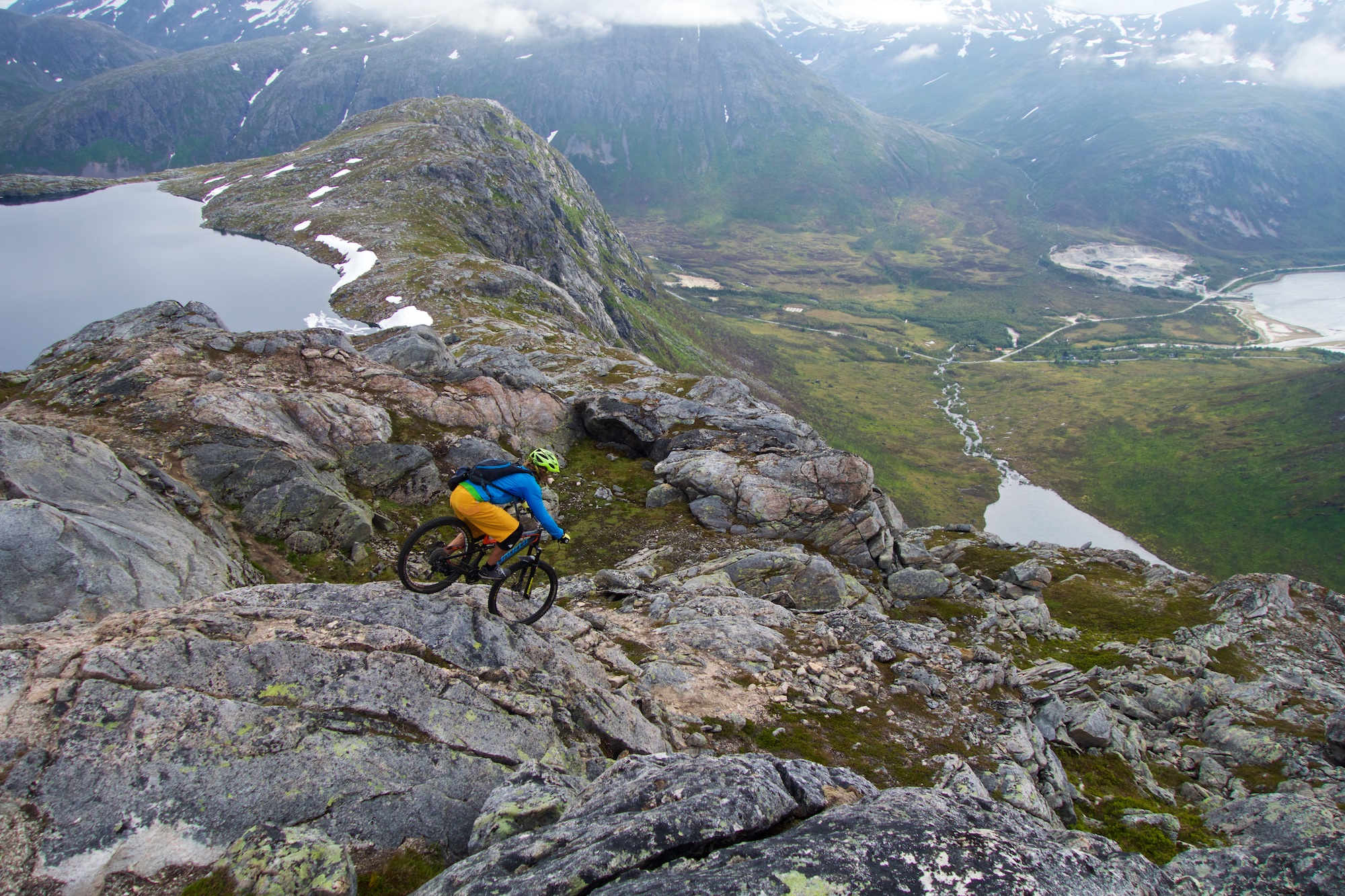 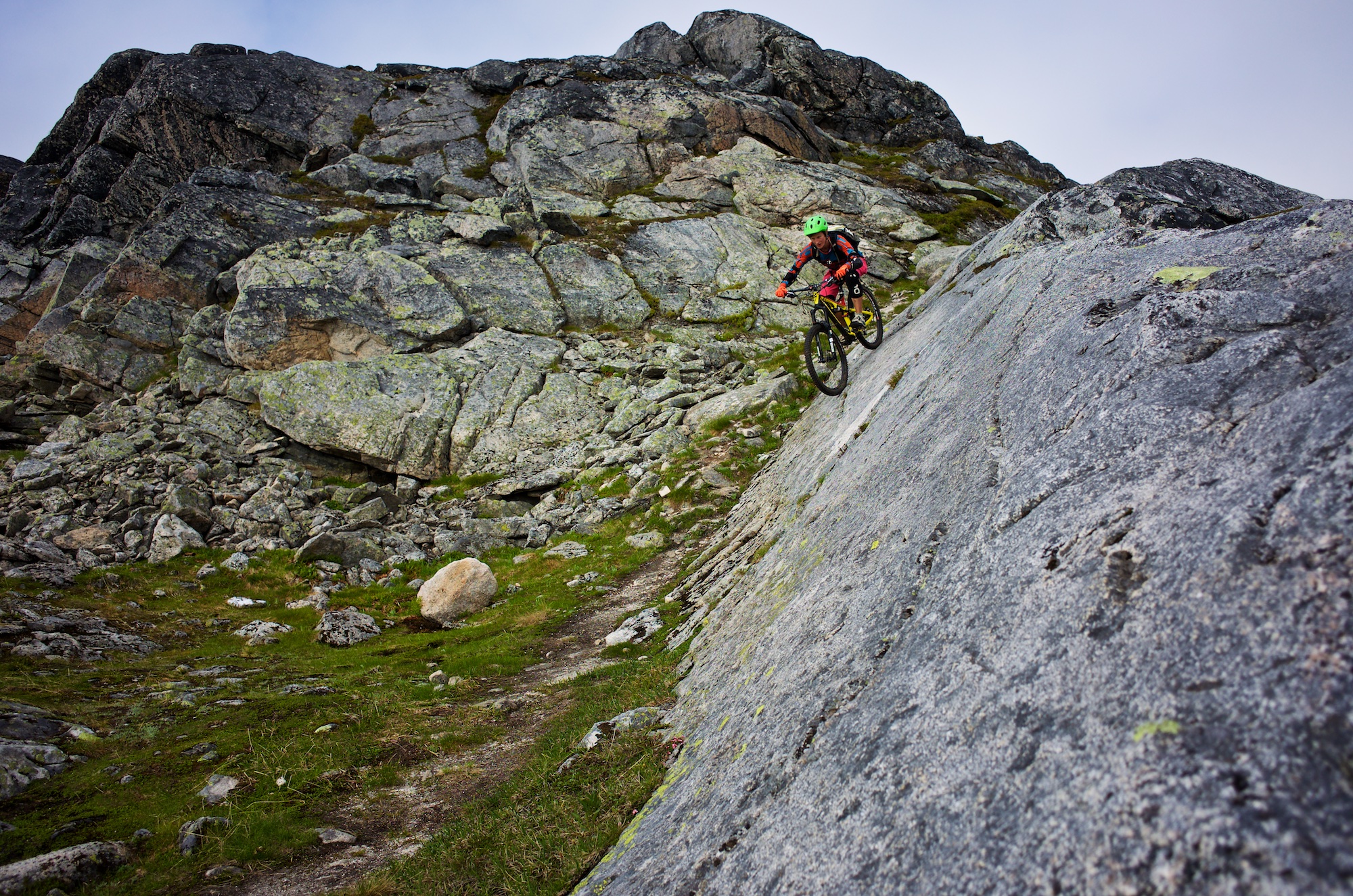 After about half way, the cruxes get easier and fewer, speed opens up and we are "on the apron". The surface of the trail is something I have very rarely encountered in other places. Imagine enough traffic on a path to break through the heather, but not enough to break through its thin, fragile roots. This seemingly difficult balance is found around here in abundance. The roots are a very soft and thin web on the ground, giving awesome grip and nice, predictable slip when the limit is reached. In short, a proper hero surface. 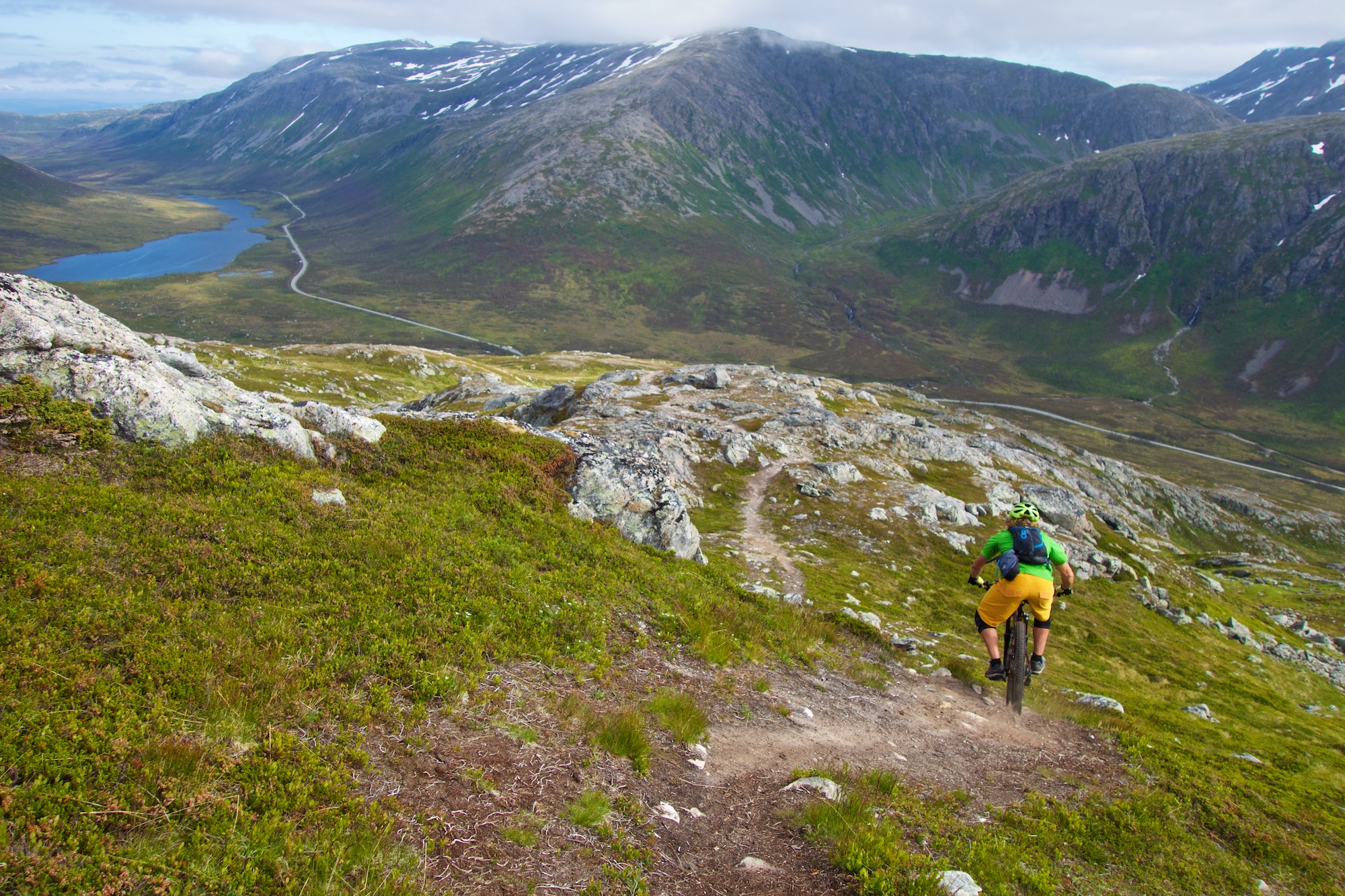 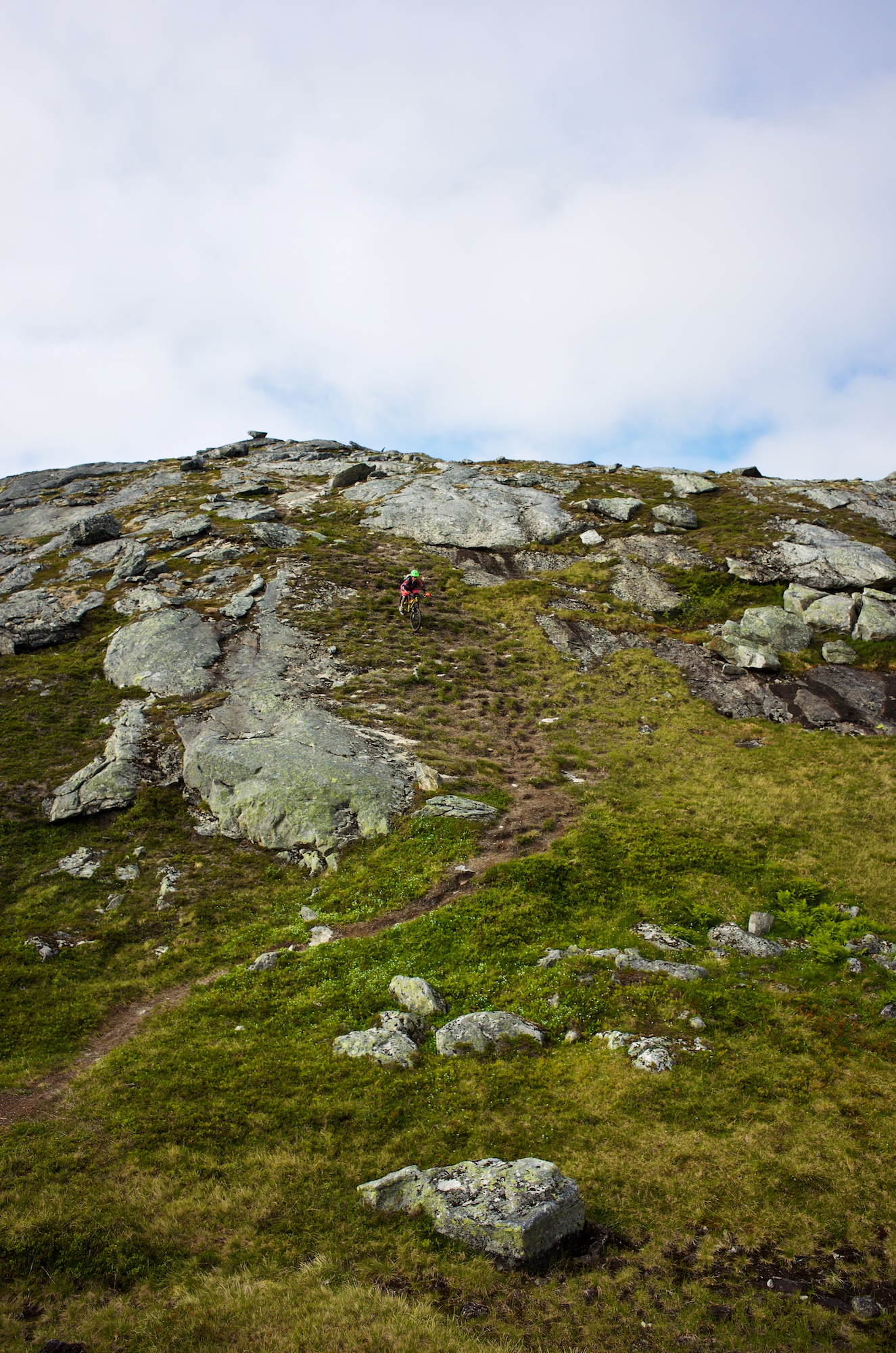 Turning things upside down, for those who maybe won't mind a bit of open powder field shredding before the choke point but like to do jump turns all the way down and would be rather excited if the last rappel ends in the driver seat of the car, we have Straumsaksla.

The climb here is a bit different. Once a short but steep stint in the trees is disposed with, it is mostly a carry up off camber and/or steep heather. Breaking off the heather are equally steep fields of more or less loose rocks. For the most parts, there is a somewhat defined "trail", consisting of a path where the worst offending rocks have been pushed to the side. It is obvious that when doing this no considerations to derallieurs, brake discs or average wheel bases were taken, not to mention IMBA standards for sustainable trails suitable for a wide range of rider abilities (yawn). 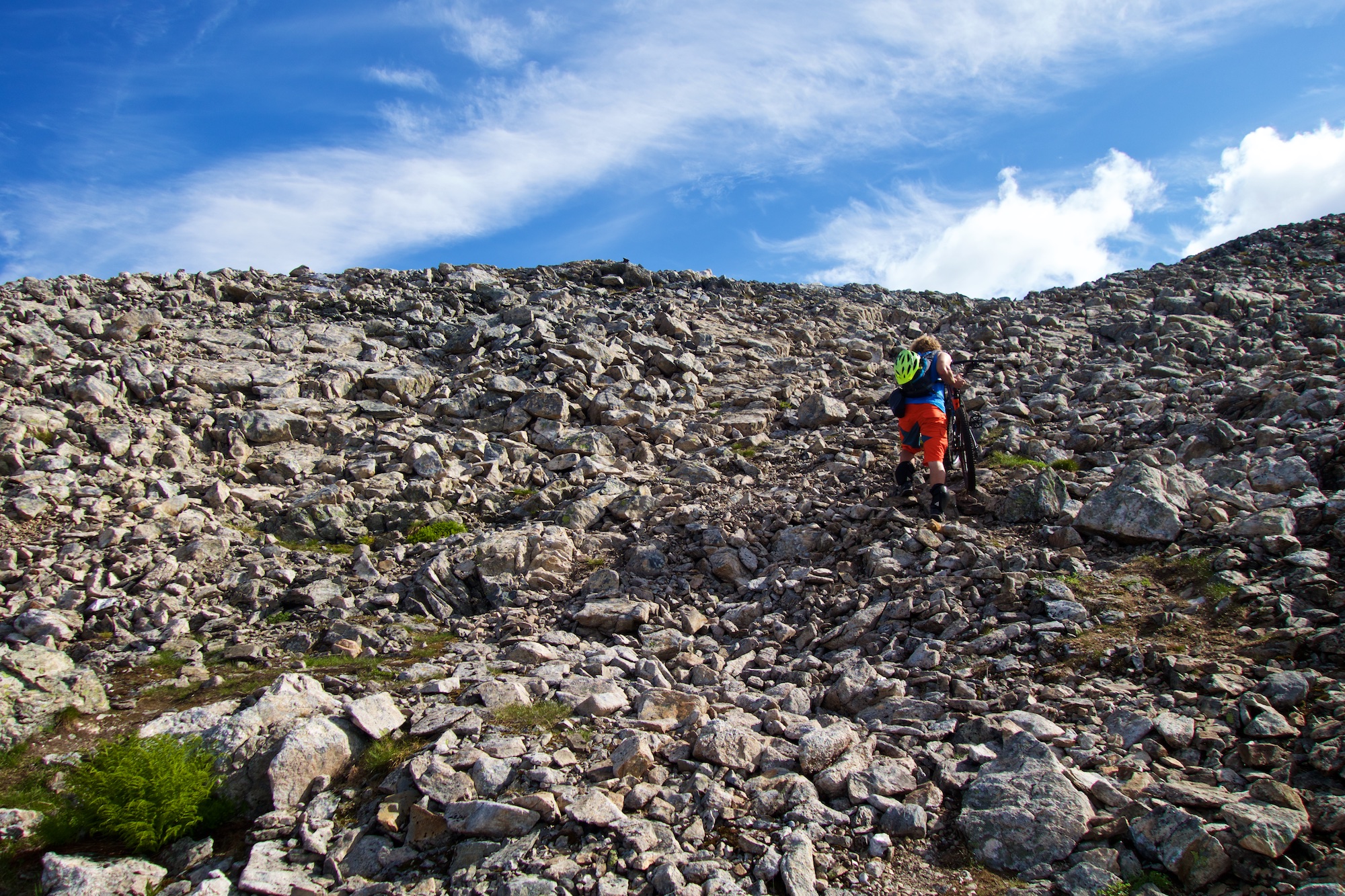 After 4-500m of climbing and the crossing of the steepest and loosest rock field thus far, the gradient surprisingly mellows out considerably, to the point where some bits are actually possible to climb on the bike! If your company left her bike in the worst of the steep stuff, in firm belief that there would be nothing rideable from there to the summit, now is the time there will be a lot of muttering from one half of the party.

Just to be clear, it was not like I was merrily plodding along a smooth path in lowest gear all the way to the summit, there were still a bunch of really rocky and awkward sections that required shouldering, sweat and toil to overcome. 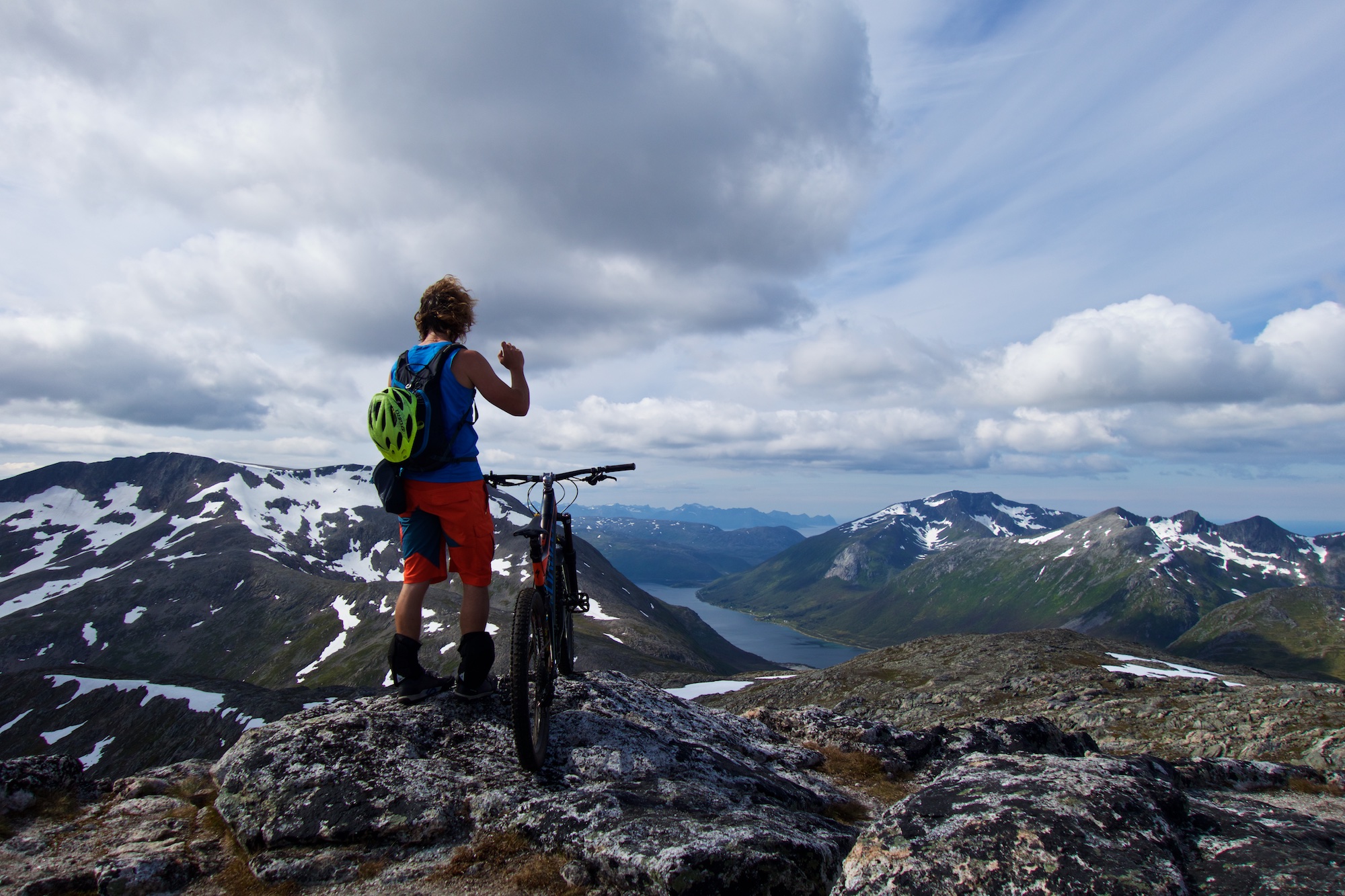 Starting off, the descent is a bit vague and not really a trail at all times. It is paramount to keep track of where to go to reconnect with the more defined trail and not end up in hopeless scree fields and glacier lakes. Really do try to reconnect with the trail, it is worth it. Great high speed sections with just enough lumps and bumps to keep you amused. 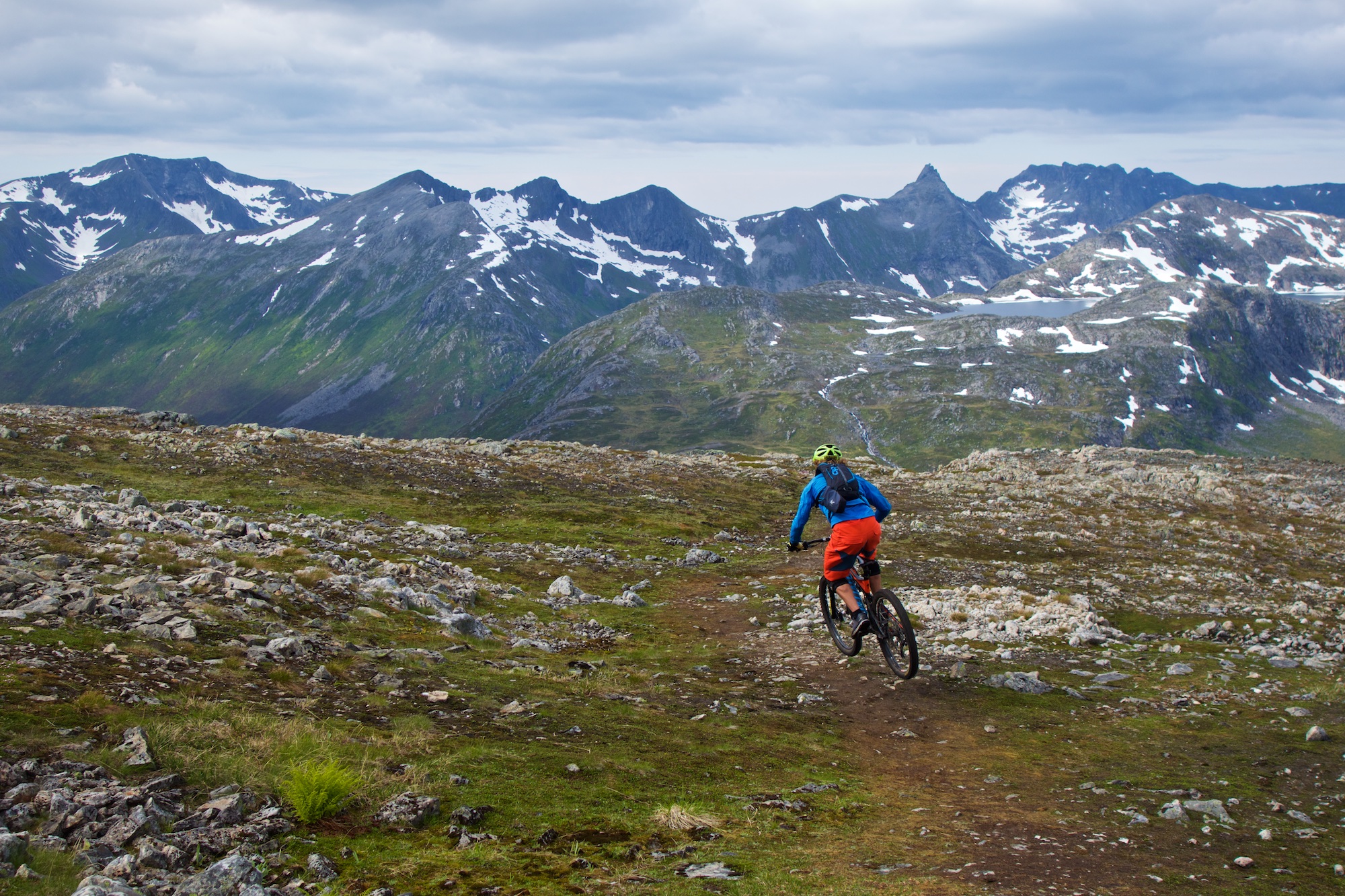 Then it gets steep. 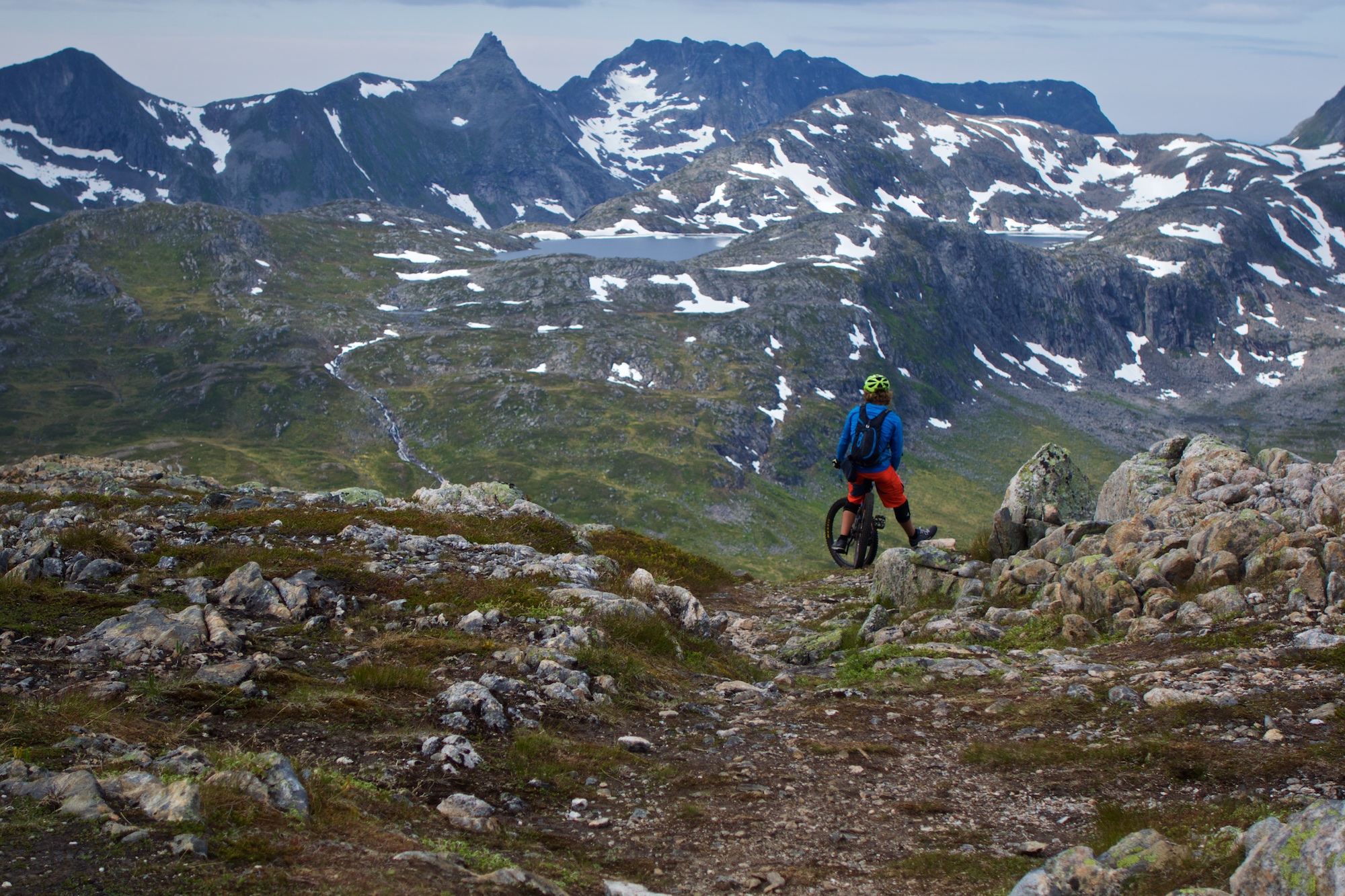 From here on, the gradient is relentless, brakes are hot and tyres always at the limit of traction. 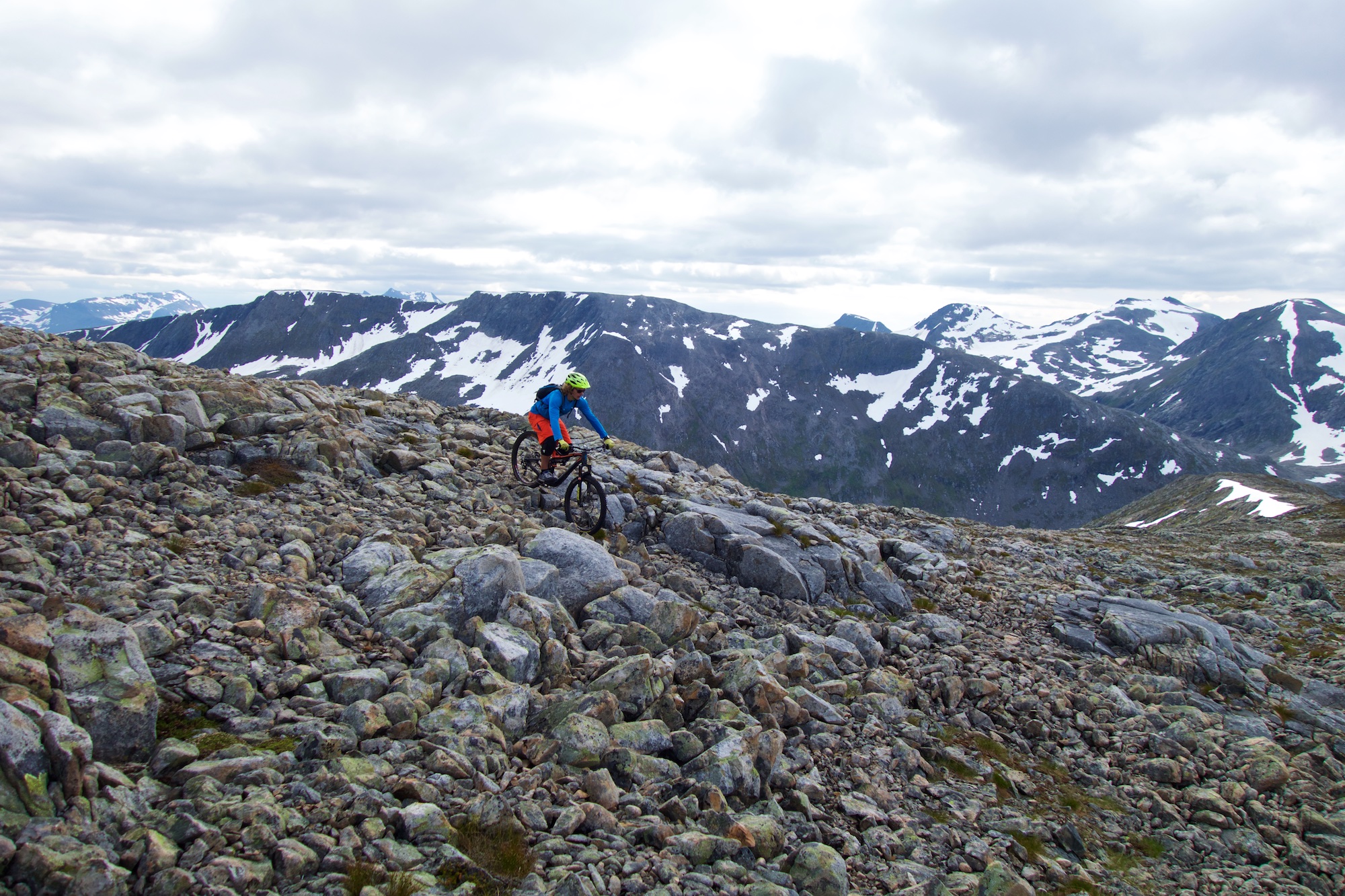 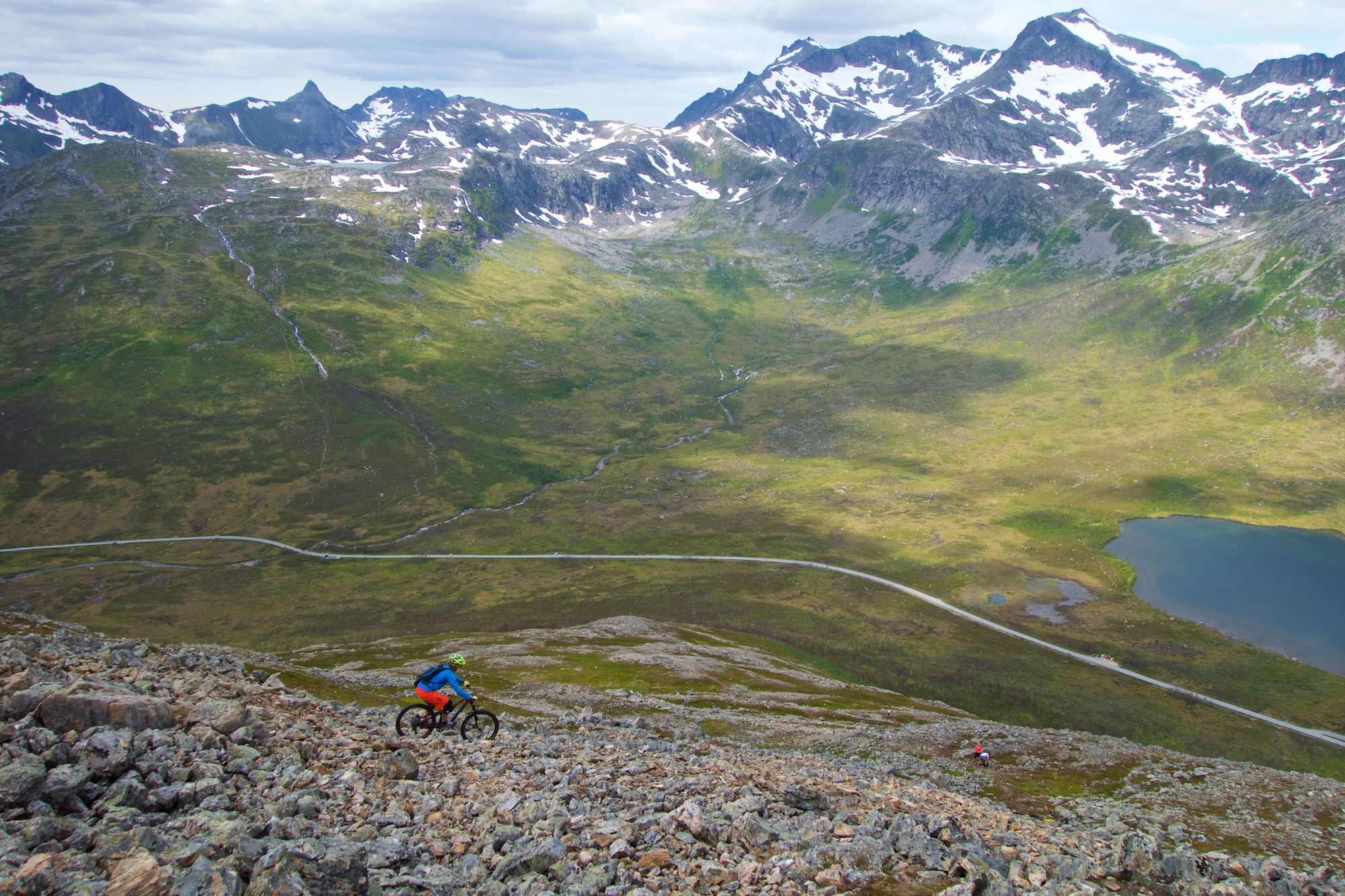 Huge rock fields are mixed up with sections of heather, usually off camber and without any form of support, at hang-on-the-brakes gradient. Very few clean roll outs are offered, so full control at all times is mandatory. 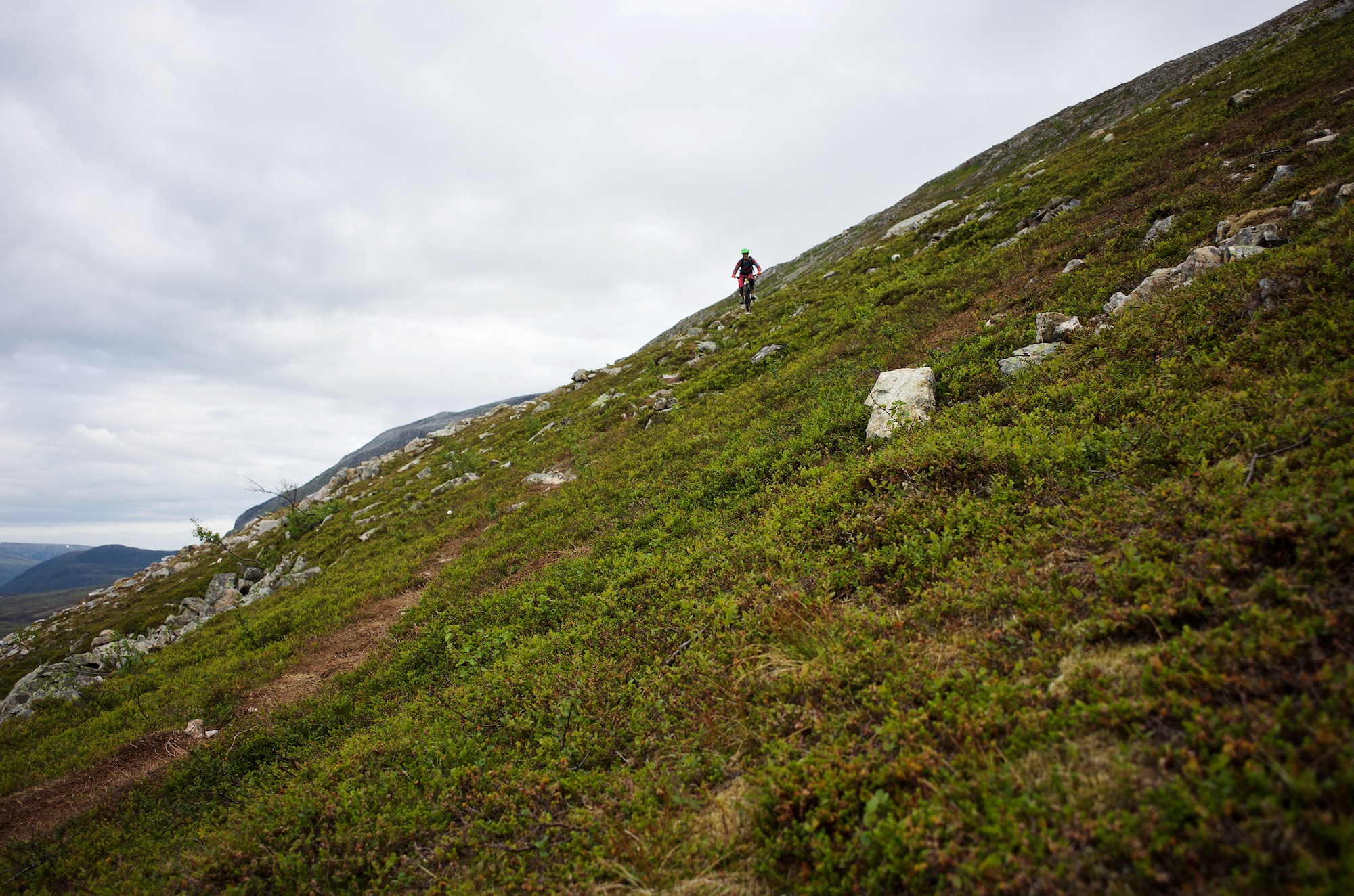 The descent ends with a few hundred meters of lumpy, bumpy and windy trail back to the road, and finally a place to relax those braking fingers and take a couple of deep breaths, a big sip of beer and call it a day.

So, what do I like then? Well, for me the order of things is not so important. What is important is that there is some of both to be had. I maybe don't need type 2 riding every ride, but get terribly bored if I have to ride without it for several days. That is one of the reasons I am not particularly fond of purpose built mountainbike trails. By nature they are made to be ridden with a mountainbike, and as such they tend to have a lot of type 1 riding (at best, sometimes they are just plain boring). A little awkwardness goes a long way!