Last Saturday, on what would later upon thorough counting turn out to be my 30th day of the season, we headed out to Gorzelvtind. There were five of us, Andrea, Kjersti, Kenneth and Kajsa. We took turns breaking trail through the not-so-sparse-but-still-rideable birch trees covering the lower slopes, as usual keeping an eye on what happened with the snow under our feet. 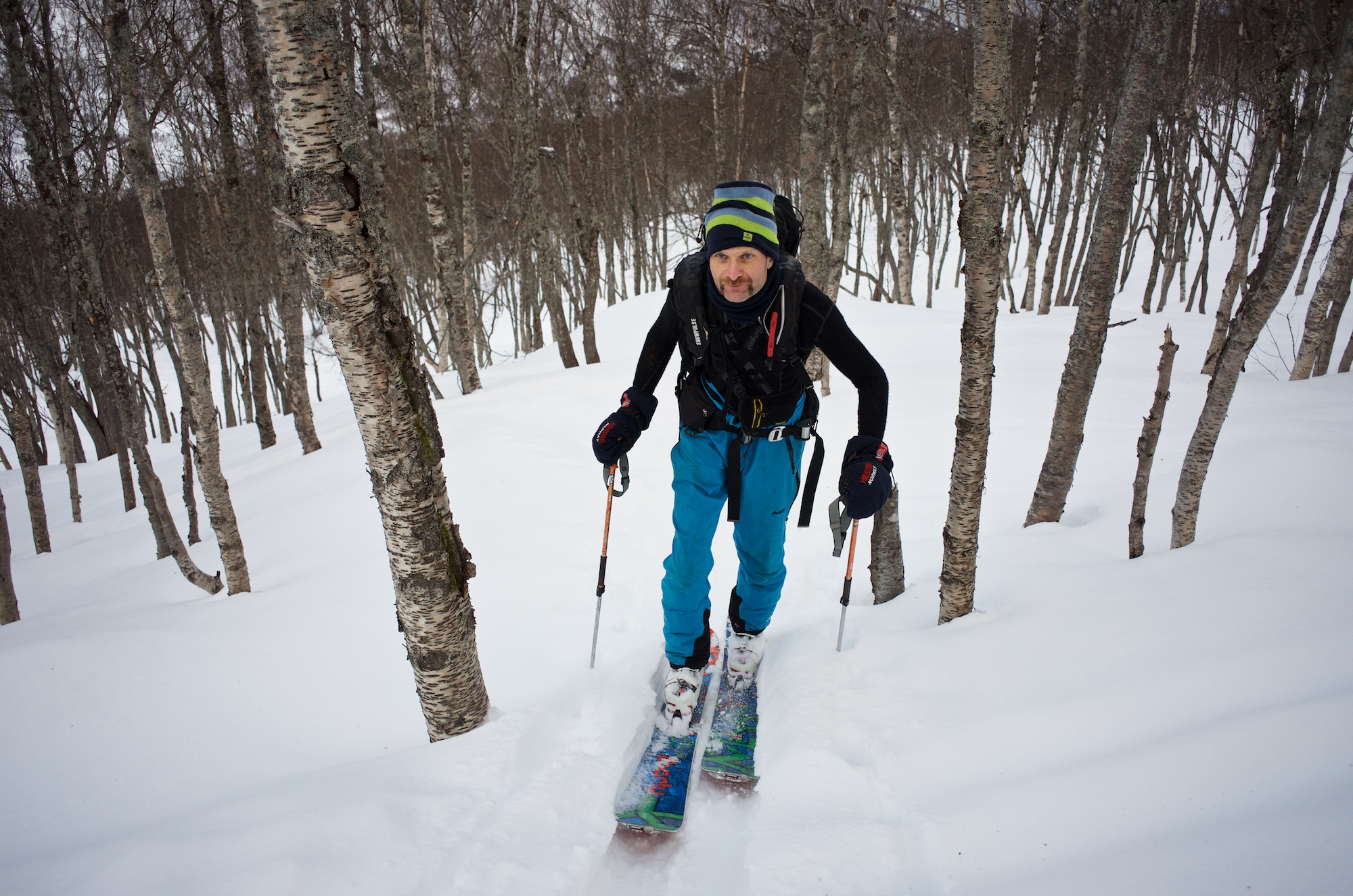 Conditions were stable enough in the trees, but traces of the crust-facets-crust sandwich that has plagued us since Christmas were ever present, and as soon as we hit treeline it combined with plenty of wind loading to really pose problems. Needless to say, we decided to turn around and just enjoy ourselves in the trees. After digging some profiles and playing around with the various layers, we strapped in and got going. The girls were slightly less amused by rutchblocks, so they had already gone ahead leaving me and Kenneth to catch up. 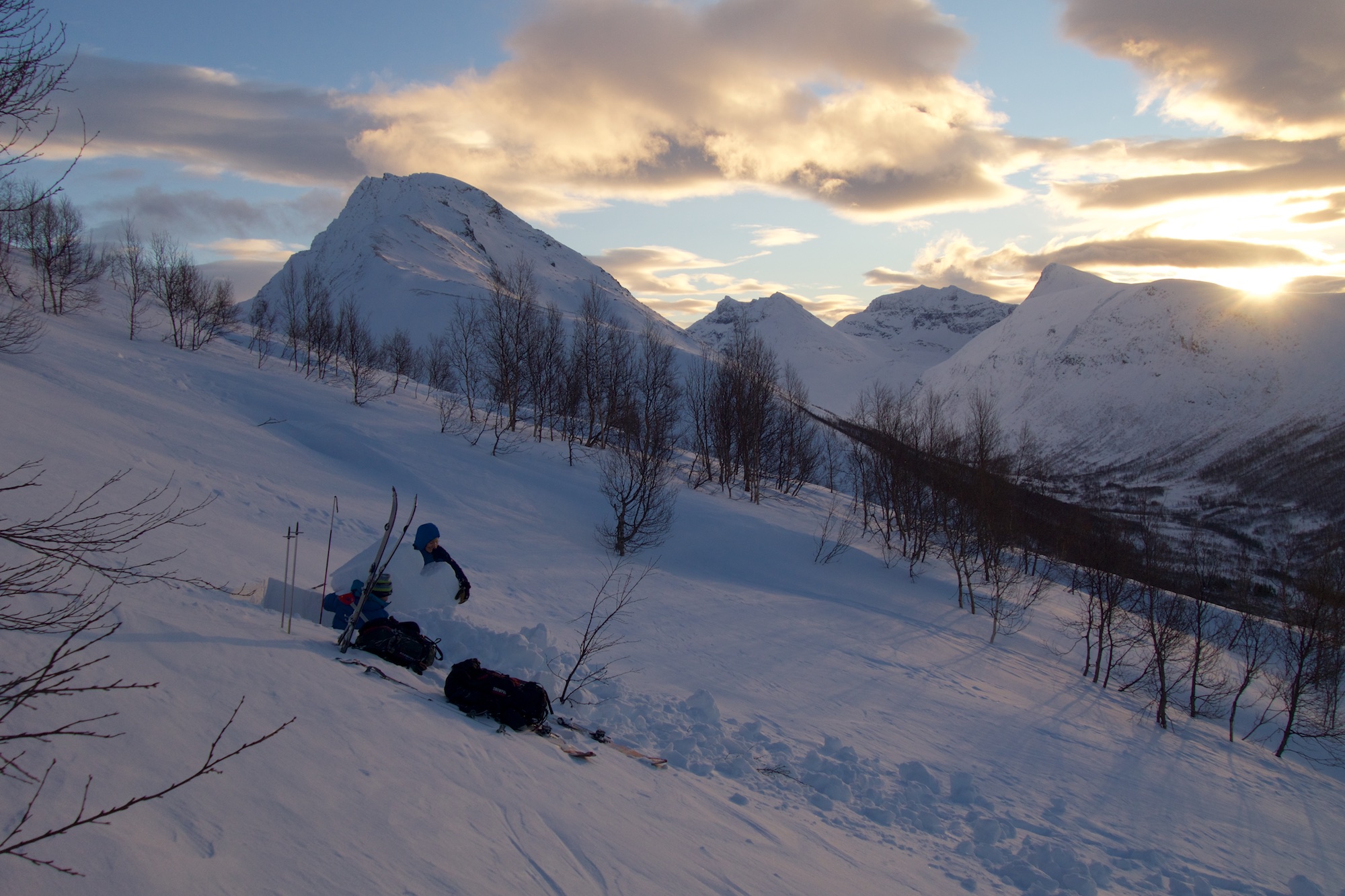 I was rocking the big board, the 164 Odin. The Odin is the board you want to be attached to when ripping steep, open terrain at serious, or ridiculous speeds. To be honest, my 70kg have never hit the speed limit of the Odin, especially not with Phantoms and Dynafit The One boots. I guess what I'm saying is that it's a serious board for serious terrain. But in tight terrain, it sure requires some leg power to drive it.

My "small" board, the 161 Storm, was in the shop for a base tune and ovarhaul. It is still far from a noodle, but feels much shorter and softer than the 3cm difference to the Odin. At least at my weight and strength levels, it has such a light and agile feel, while still being capable of utterly unsafe speeds.

So why do I go on about my two different boards one may ask?

Well, as we made our way down through the trees as usual I tried to keep it fun, poppy and reasonably aggressive, but still safe. If I hade been on the smaller board, I would probably have been on the right side of that line. But on the big board, a split second of bad decision making sent me bouncing off a tiny tree stump after not being able to get my edge properly down, and once airborne and with no control over my direction I ended up coming to a dead stop against a sturdy birch. The board on one side, the rest of me on the other, taking the impact right above the boot cuff.

At the moment of impact, as I heard the bones in my lower leg snapping, I knew that was it. The second weekend with actual sunlight, what I thought would be a grand season was over. I somehow managed to get unstrapped, and leaning against the very tree that took me out I tried to make myself as comfortable as I could while Kenneth phoned the emergency services.

Soon after we were joined by another party, consisting of Leif and a girl whose name unfortunately slipped my mind in the ensuing morphine induced fog. They kindly helped me get my backpack between my bum and the snow, thus avoiding me literally freezing my ass off. Soon enough Kjersti came up the hill with some fine painkillers, and was soon joined by the rest of the party, everyone giving their absolute everything to keep me as warm and comfy as possible. I could feel my lower leg hurt bad, and I could see that it was broken, but at least I was not bleeding. I could wiggle my toes well enough, and I had no pain in the knee. 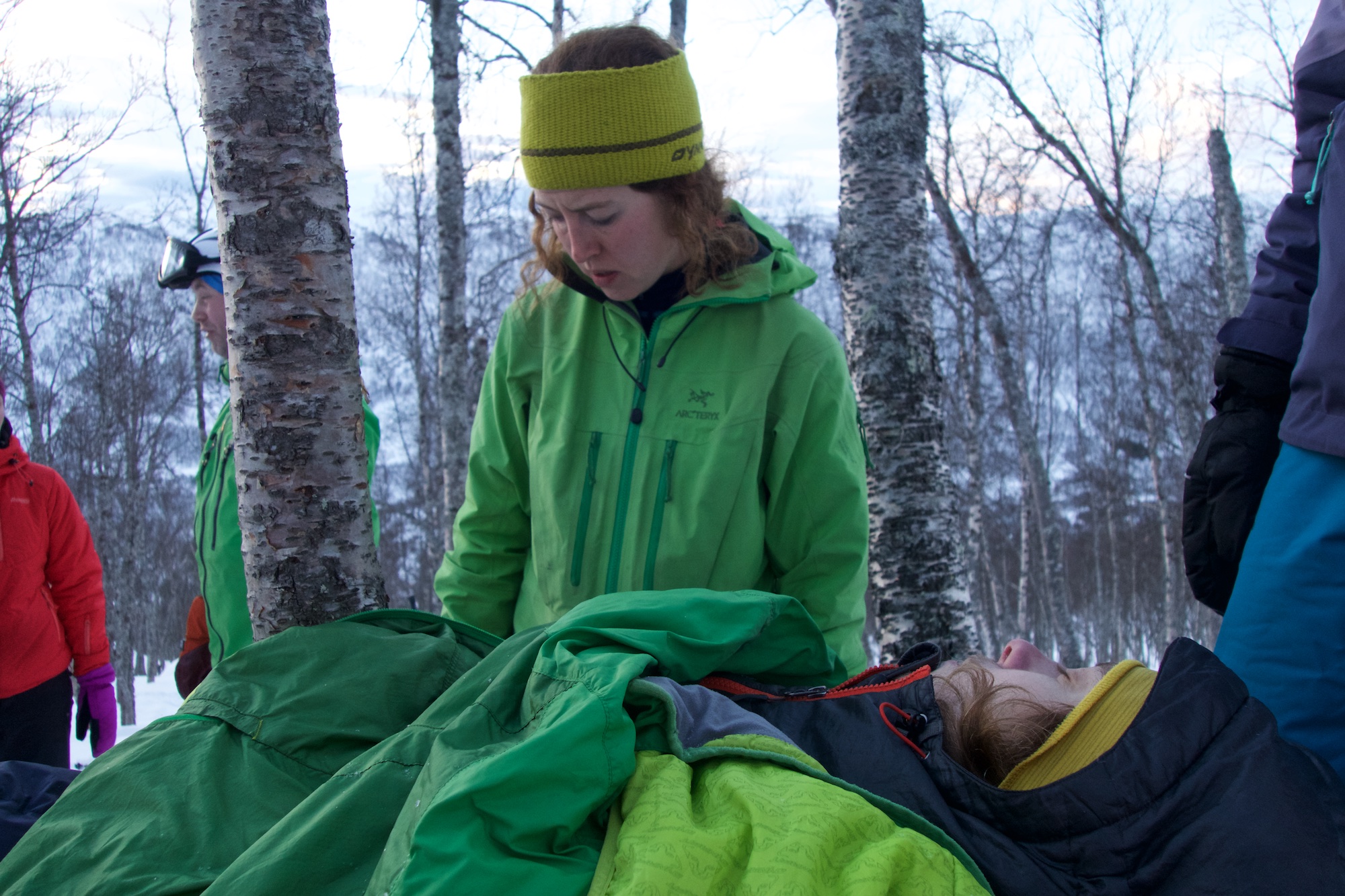 After less than half an hour we could hear the helicopter, and it was not long until they winched down Dag, half man and half super hero, equipped with very strong drugs indeed and a stretcher. The former was obviously needed to get me on the latter, and after sending me on a massive and scary trip they apparently got me on the stretcher and winched me up to the chopper. In the trees, with the wind blowing. If I had been in a state where I could grasp such things, I would have been most impressed. Now I have to be impressed in retrospect as I am told the story by the sober bystanders. 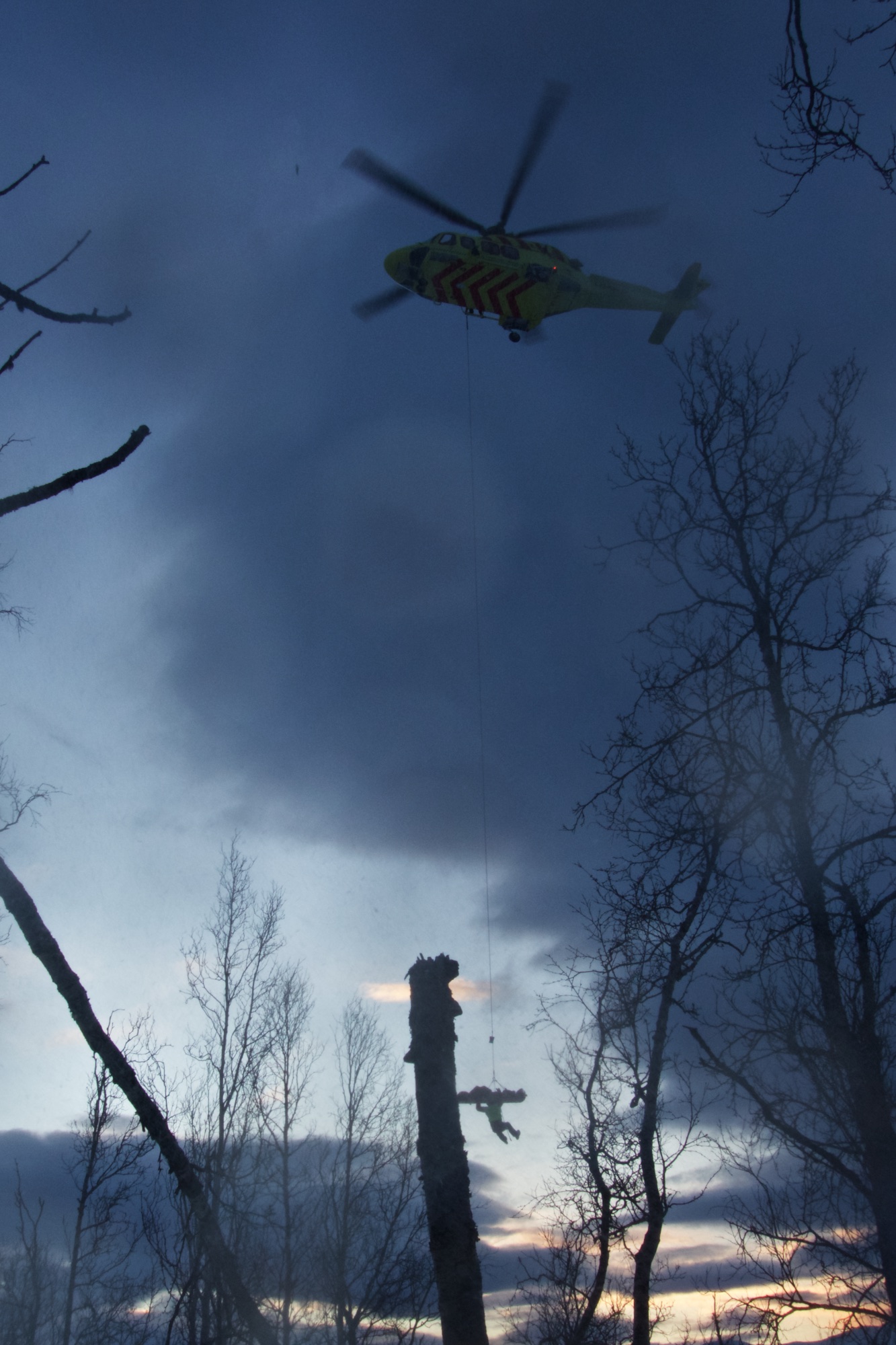 When I came to, I stared into the eyes of a doctor, who probably just minutes earlier had relocated my patella and straightened out my shattered tibia.

I was still high as a kite, but at least I could sort of focus and hear what people where saying to me. And it was not just pretty things I heard. Apparently the crash was more violent than I had thought, and the tibia was broken in several pieces starting at the boot cuff and ending right at the knee. Things did look quite bleak. To add insult to injury, I emptied the bottle I had just urinated in over myself. Never give open bottles to high people, they lack in balance and dexterity. Having been moved to a dry bed, I was rejoined by Andrea and left waiting for surgery. 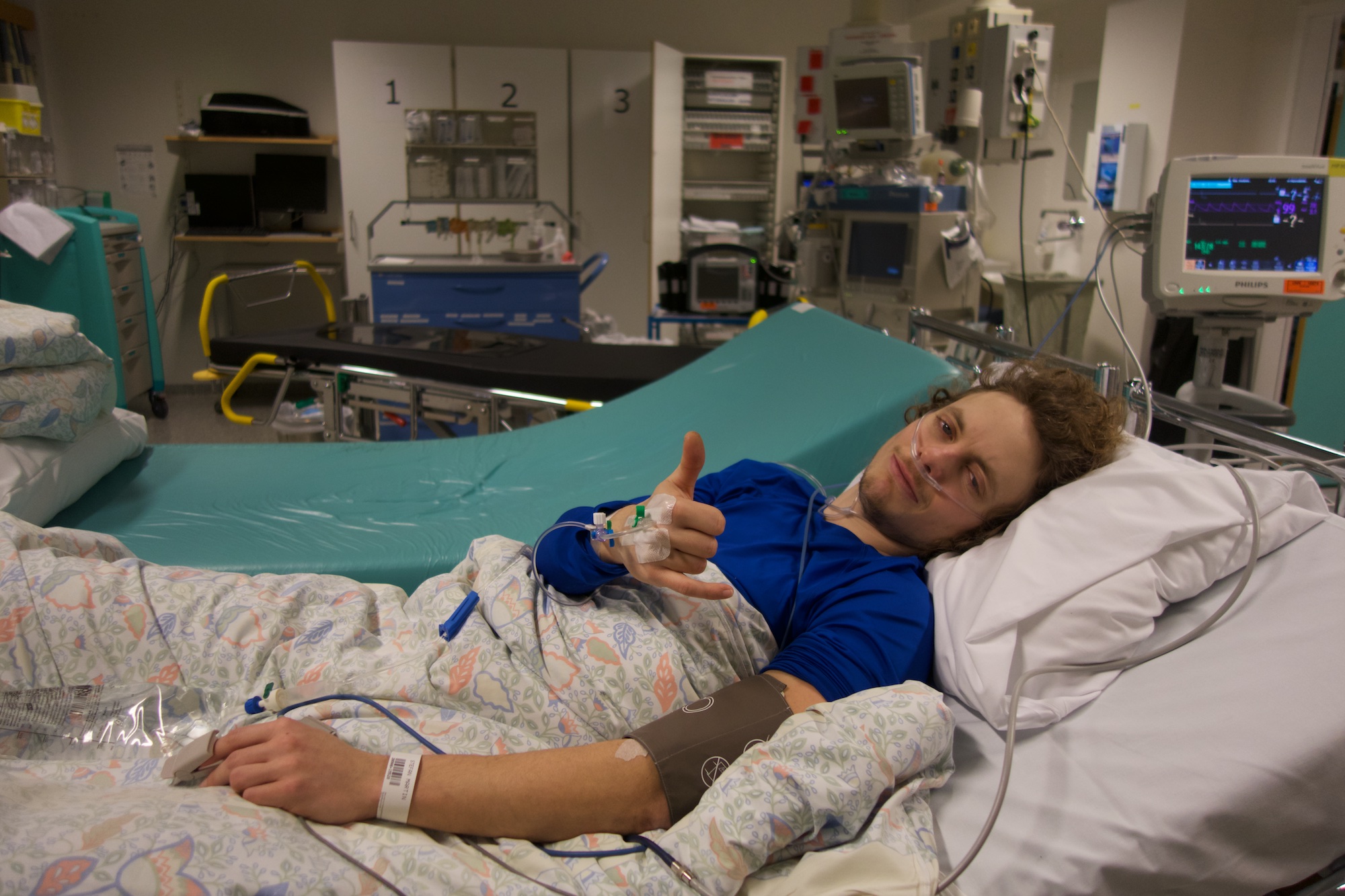 After a period of time that can have been everything between five minutes and a week, but probably was around a few hours, they knocked me out completely and took me to surgery. 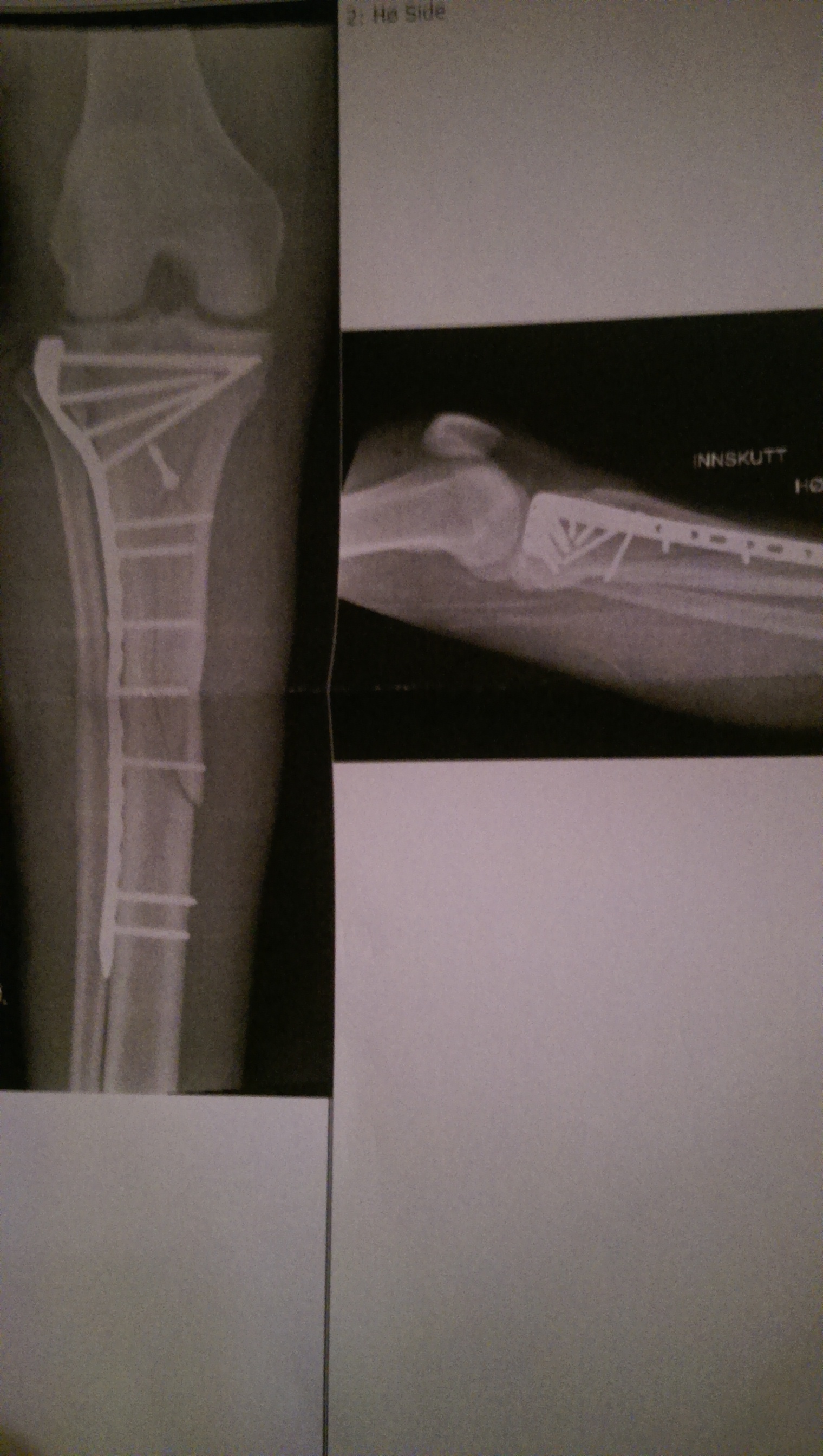 The surgeons spent over four hours nailing all the bits back together, and I am convinced they did a thorough job. At least they did not skimp on screws. As is maybe obvious even to the not medically trained reader, that knee needs a bit of rest before it will be ready for action. To be precise, 6 weeks of absolutely no weight load at all, and a massive knee brace to take all side loads off as well. After that, we will see, but the surgeons sounded positive, giving me hope that there will be a biking season at some point in the future. Today, I was out of the house for the first time since Friday when I came home from the hospital, and did it ever feel so good to get a breath of fresh air! 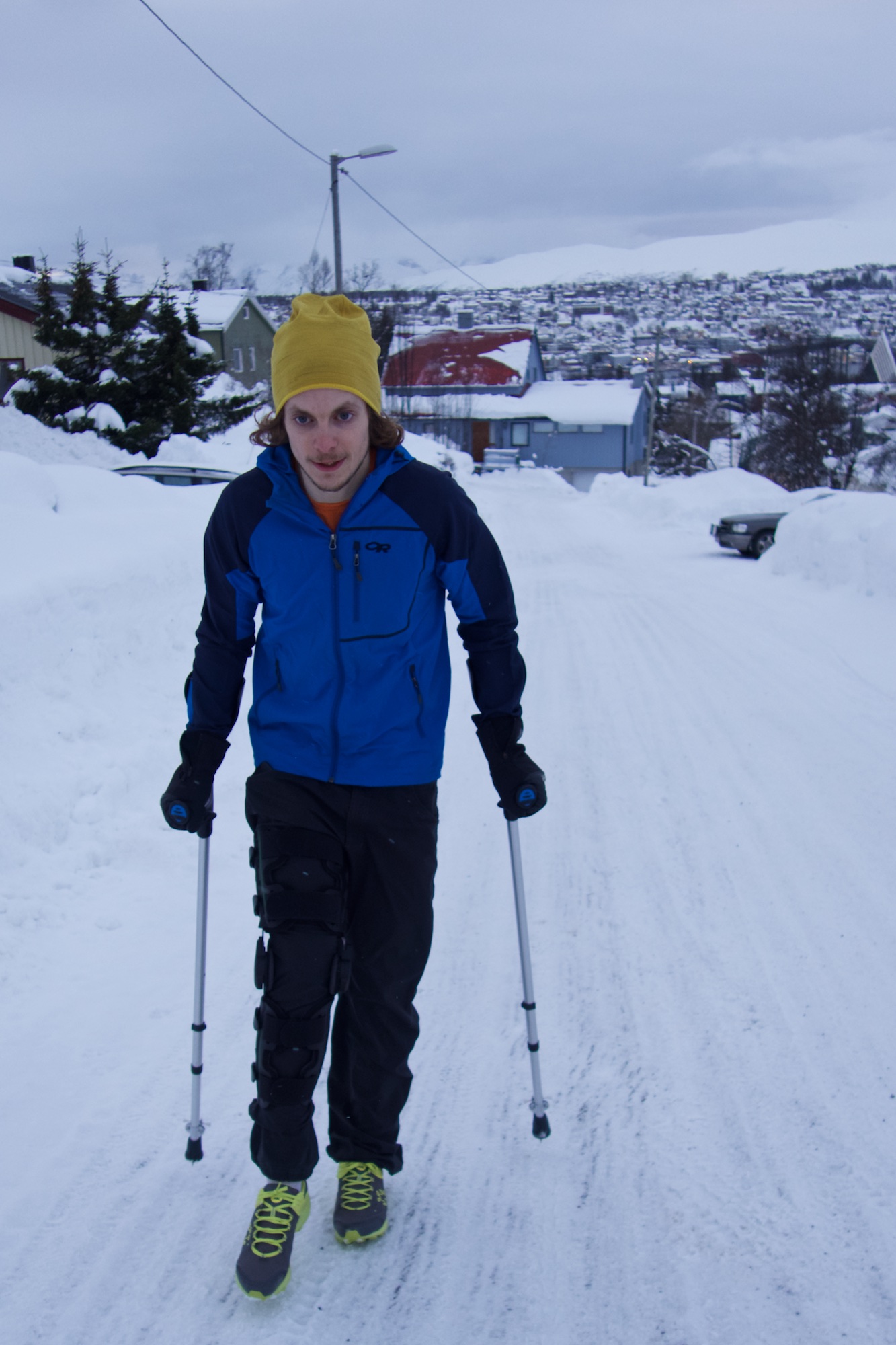 I am so incredibly thankful to all the people that got me this far, if not for you I would be frozen to death on a distant mountain, with a shattered tibia to boot. First and foremost Andrea for just taking care of me and an innumerable number of practical things, all the people I was touring with last Saturday that got me everything from drugs to warmth and courage, Dag the superhero and the chopper pilot who managed the very impressive feat of evacuating me despite all the trees and the wind, all the people at the hospital that nailed me back together, sorted out pain, hunger, thirst, all friends who came and visited me and again to Kjersti for just being so awesome and generous with medical knowledge and time.

I have a long and probably quite boring road ahead of me, but will do everything I can to get back stronger than ever not let all those efforts go to waste.