A trail biking festival seems like a very Norwegian thing to me, probably because I have never seen it anywhere else. The concept is simple: someone who is excited about his or her local trails gathers a bunch of people at some camping ground, hopes for good weather and shows off said trails for a few days, drinks beers and have a nice time. It's like a race, but without all the raciness and everyone stays for the party afterwards.

There was recently one of those happenings in the tiny village of Skibotn in Storfjord, a few hours drive from here, and since this is my own corner of the Internet where I do as I like, I shall begin to tell about the last day. A day of clouds, hangovers and steep trails.

I was supposed to be the guide, but it turned out that I knew everyone in the group, and everyone knew the route, so it was more like a regular ride with friends. Anyway, the climb (because any good ride starts with a climb, or a shuttle, or maybe a lift...) goes along an old road built by Russian prisoners of war during WW2. It switchbacks its way up the steep mountainside, sometimes it is more than a meter wide, sometimes almost consumed by time, harsh weather and rockfall. 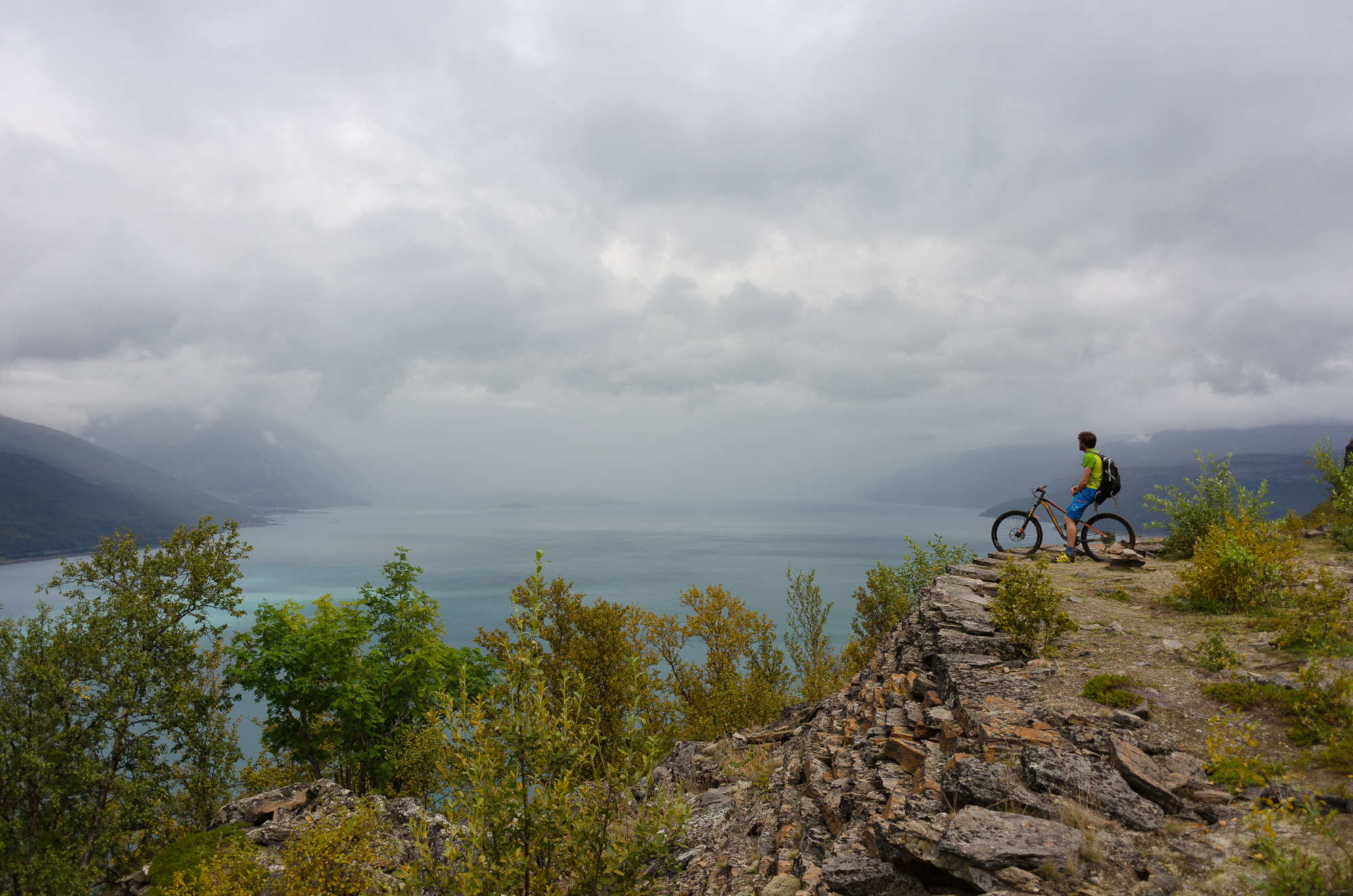 Some were in better shape than others, a few comments about headaches were heard as the group slowly made its way up the dew covered rocks in the damp not-so-early morning. 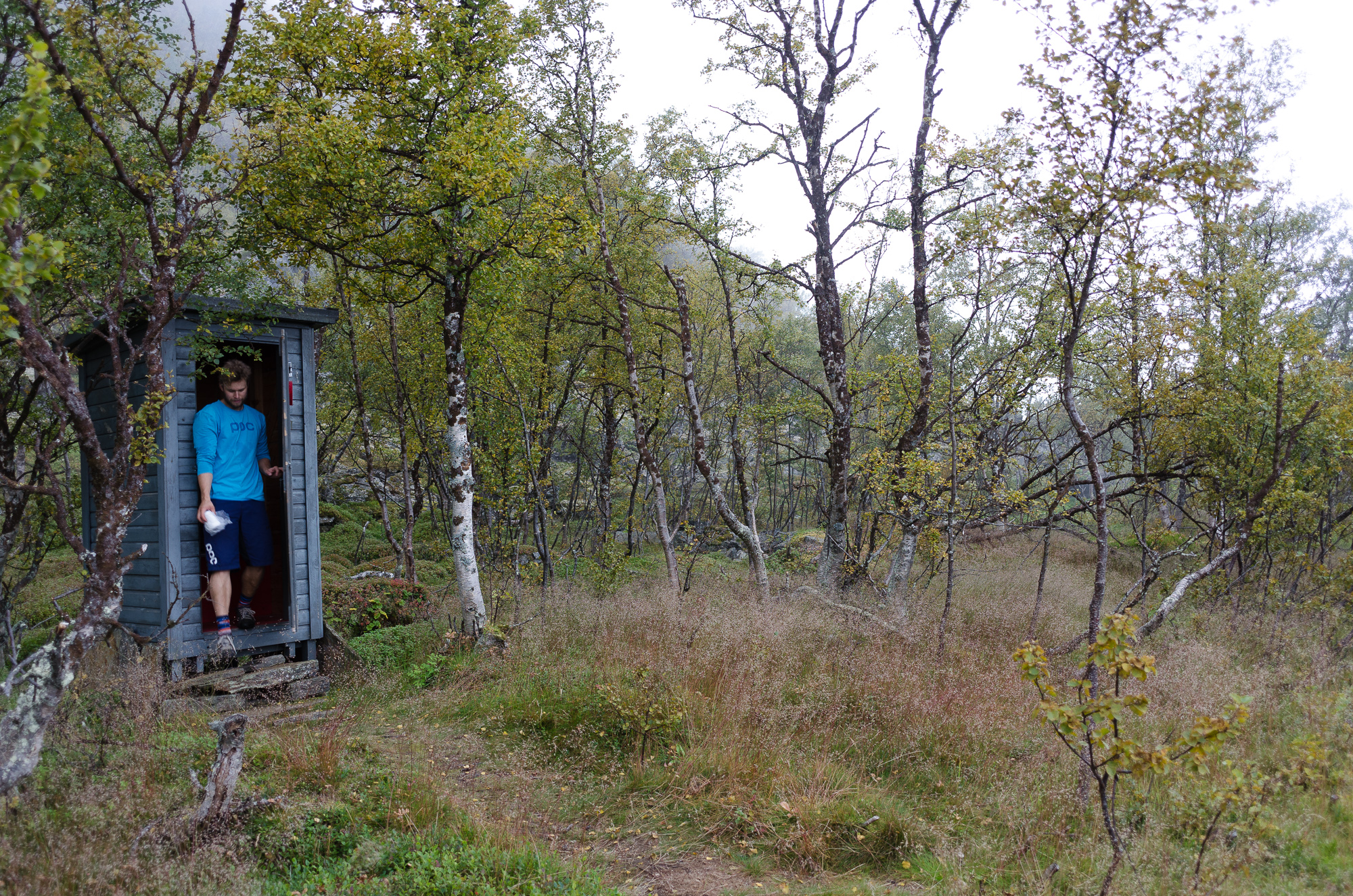 We pushed our bikes up the old road as the fog rolled in, half expecting to see the ghosts of the people we were walking on. Quite literally in fact, in some places they used the corpses of dead road workers as filling material for the road bank. 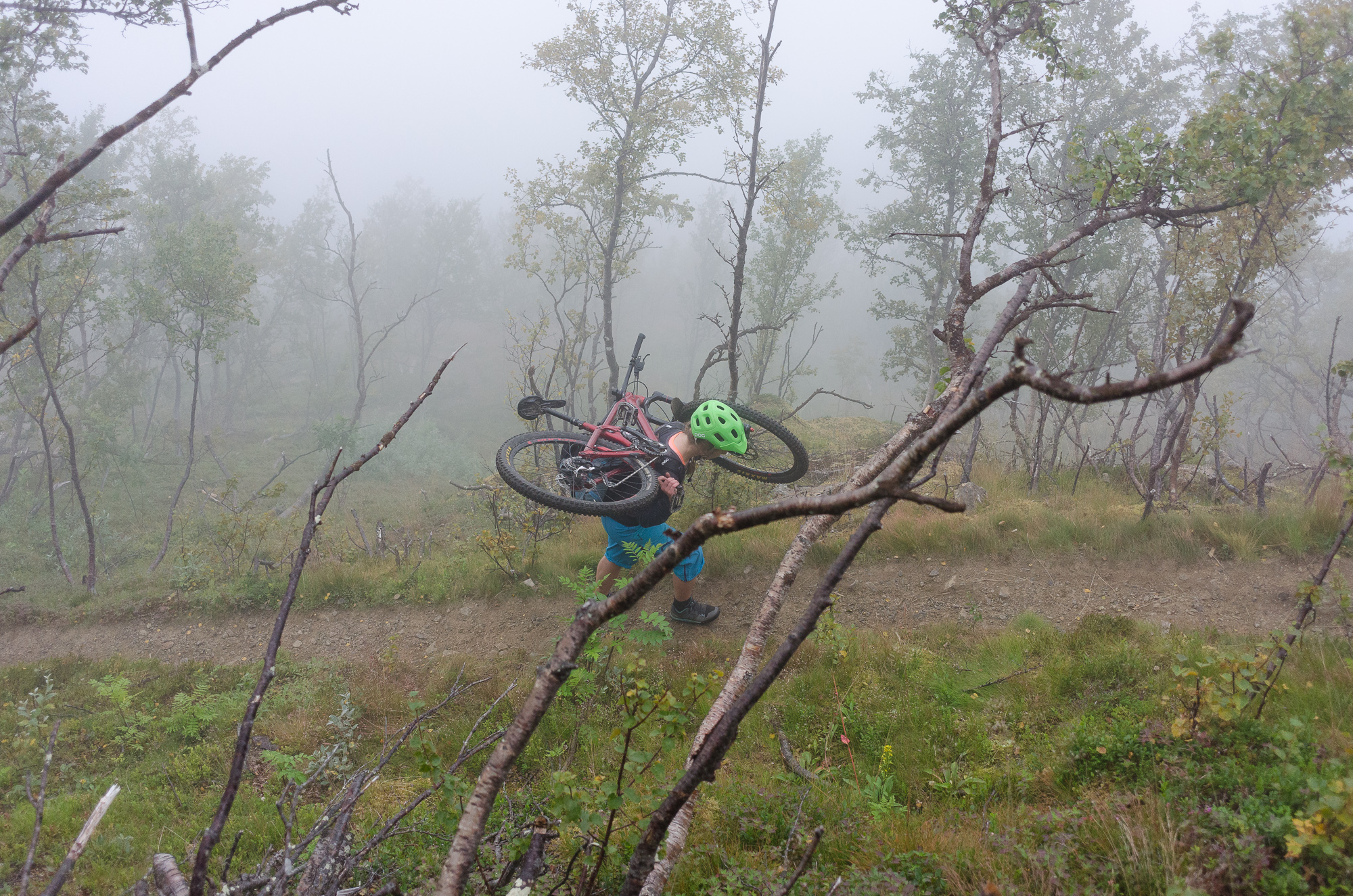 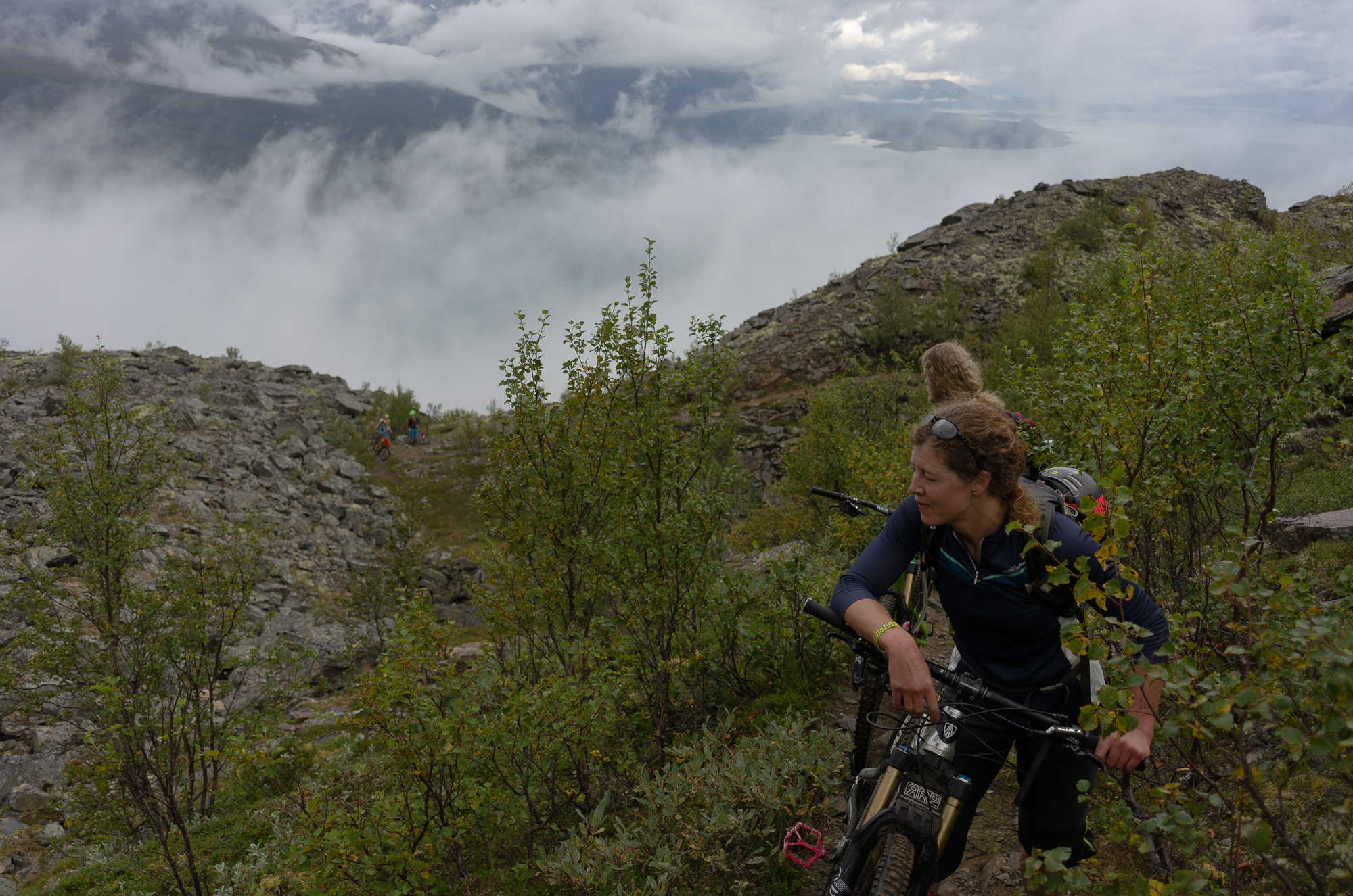 Luckily we made it to the bunker at the summit without upsetting any undead Russians. The idea was to climb on the old road, gain the ridge and plummet down on the other side on a steep loamy bit of goodness. 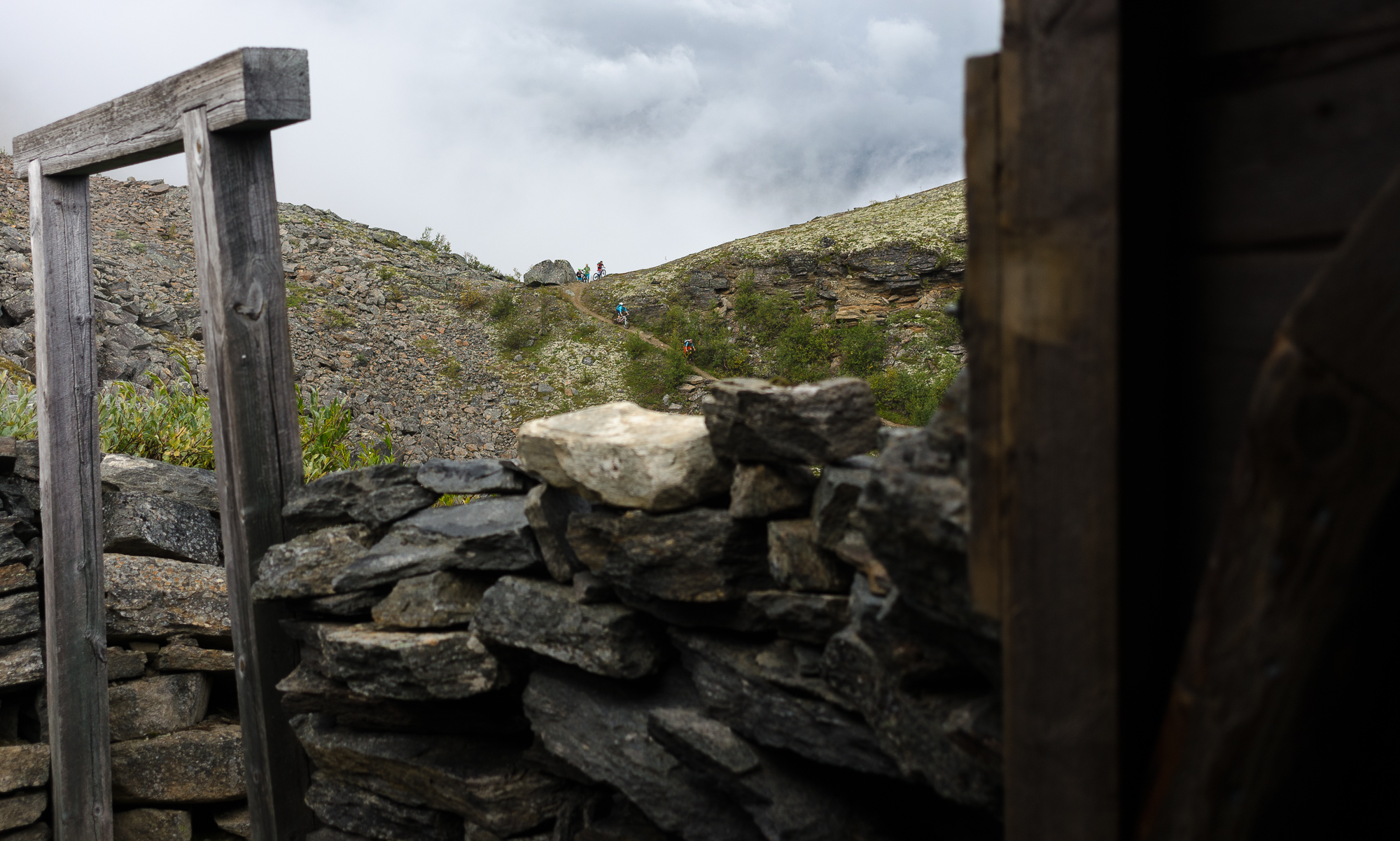 Due to the steepness of the trail ahead there had been a fair share of nervousness that the trail would be wet, and relief was unanimous when it turned out that such concerns were completely unfounded. 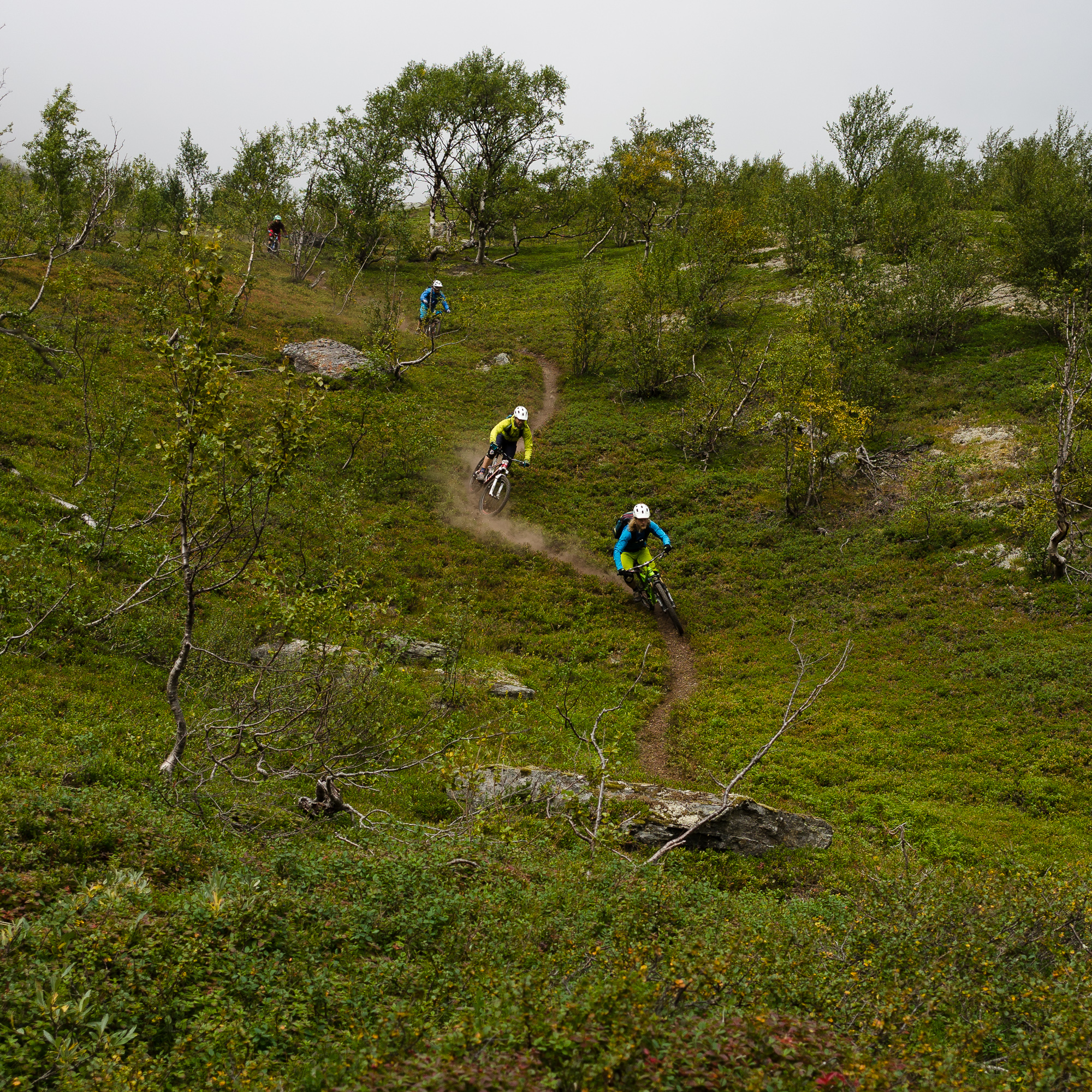 The first turns are sweet, then it gets steep. 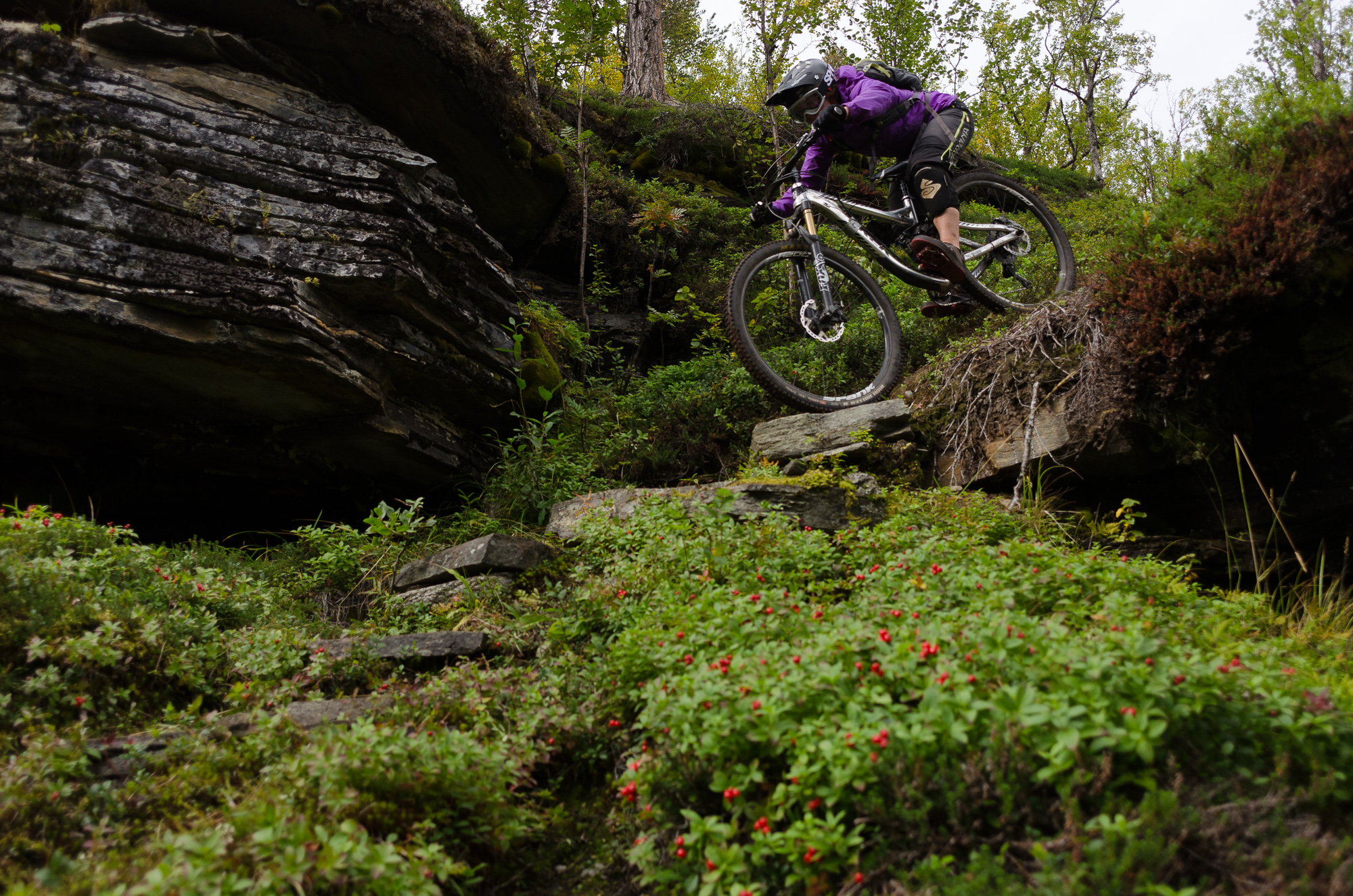 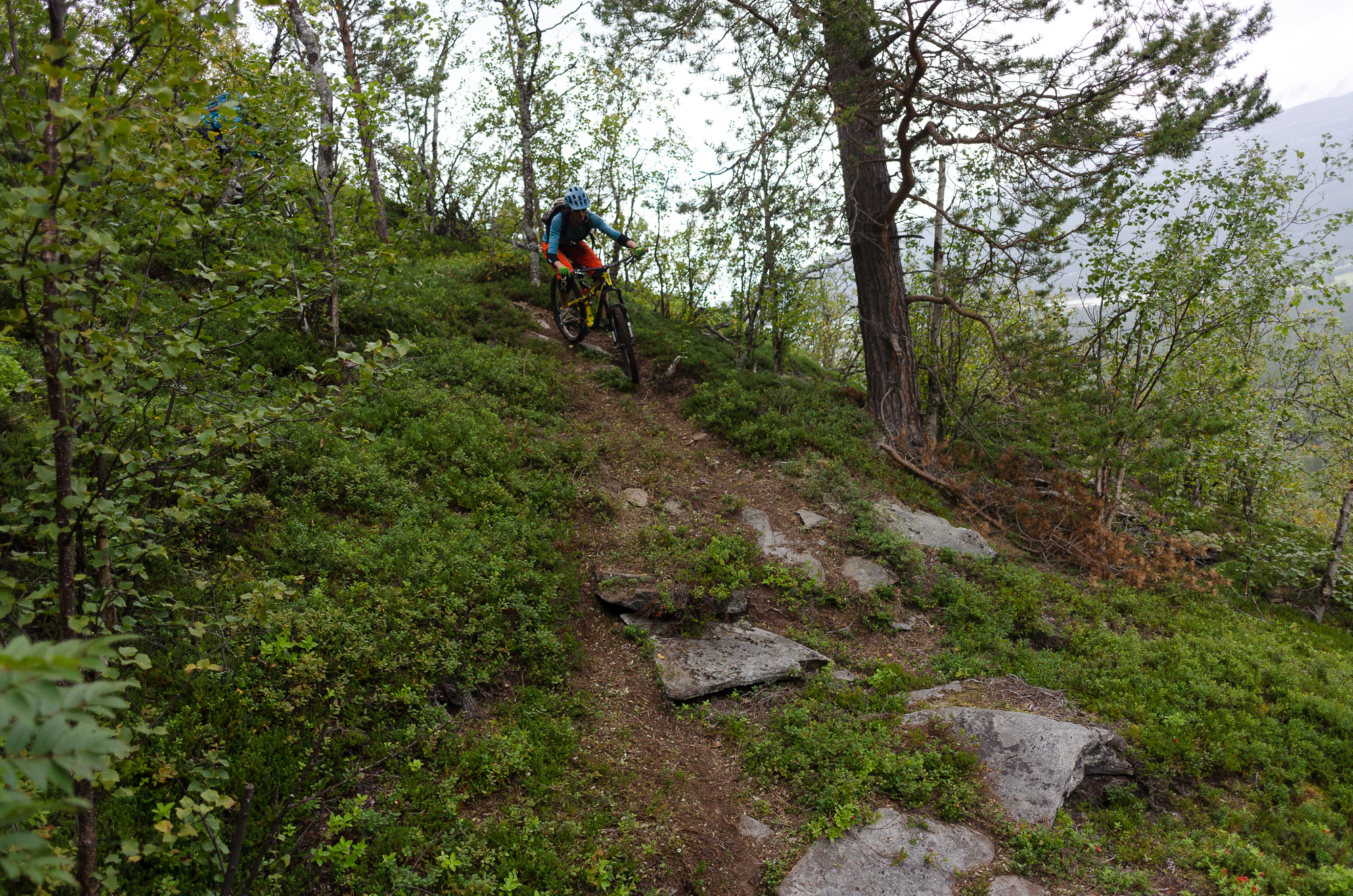 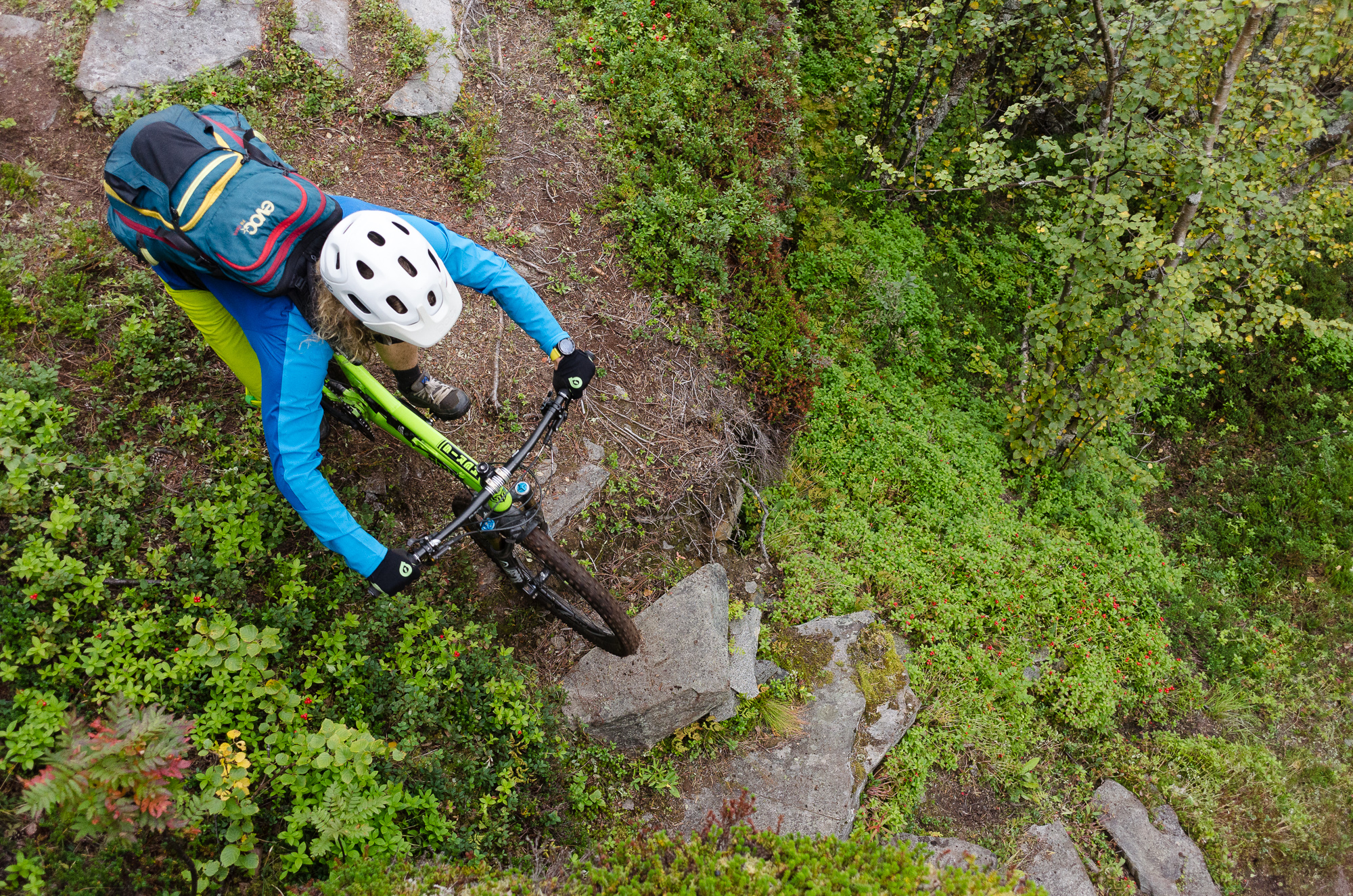 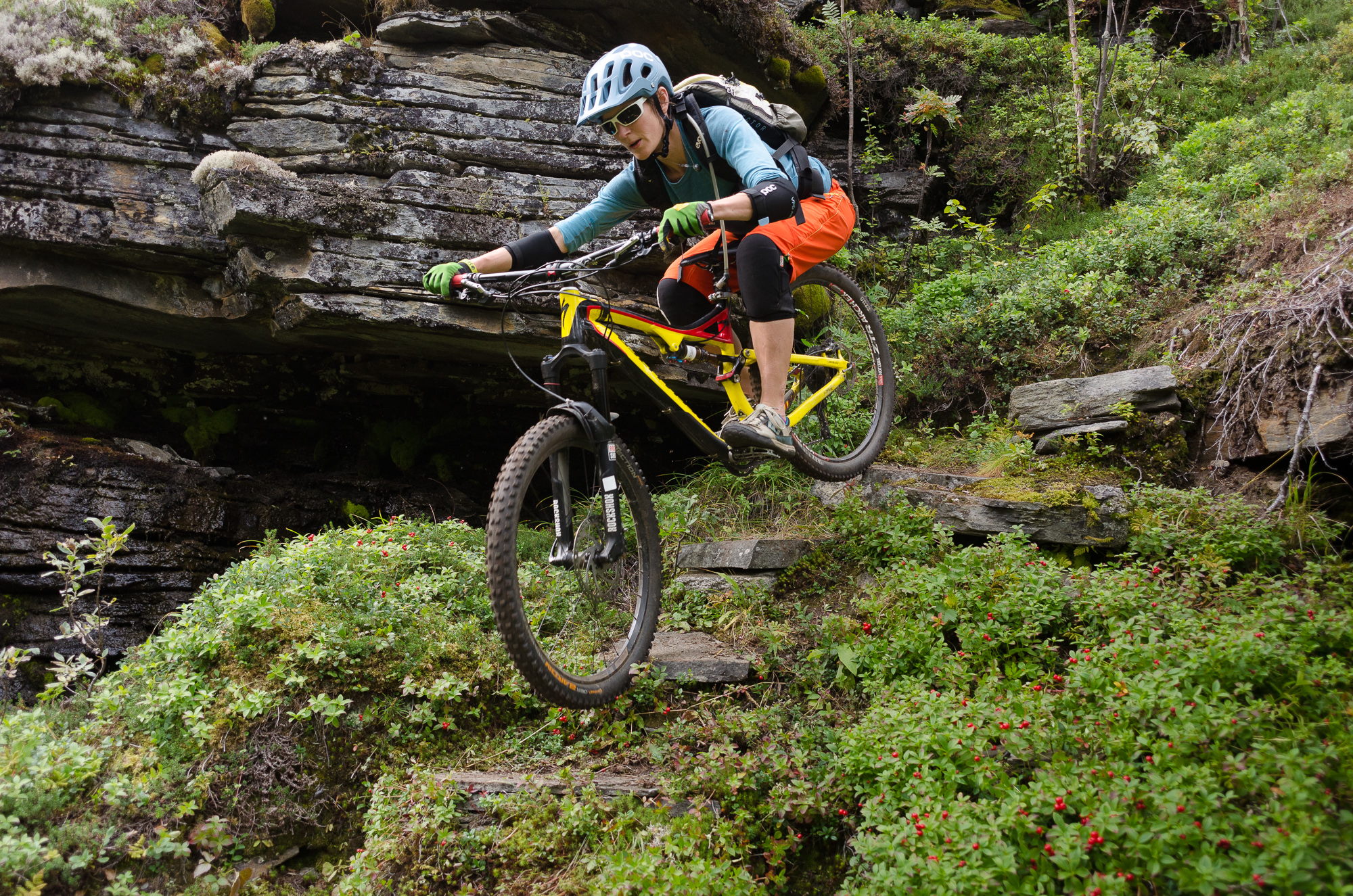 Having survived the descent, most of our group made the sensible decision to call it a day and head back to camp. On the other hand, I could not bring myself to leave without also descending the other side, that is the old spooky road we climbed earlier. Stian and Gustav did not really need any persuasion, and soon enough we found ourselves climbing back up the same way we came down. The steepness of that trail really came to it's own when we tried to scramble up it with bikes on our shoulders, this might well be the trail with most sustained steep fall line riding I have ever ridden. The only reason it is rideable at all that it is located in a tiny village in the arctic, and as such sees very little traffic. IMBA would not just be offended, they would probably run home crying.

After a surprising amount of huffing and puffing with bikes on our shoulders and with thighs screaming for mercy we were finally back on top and ready for our second descent of the day. 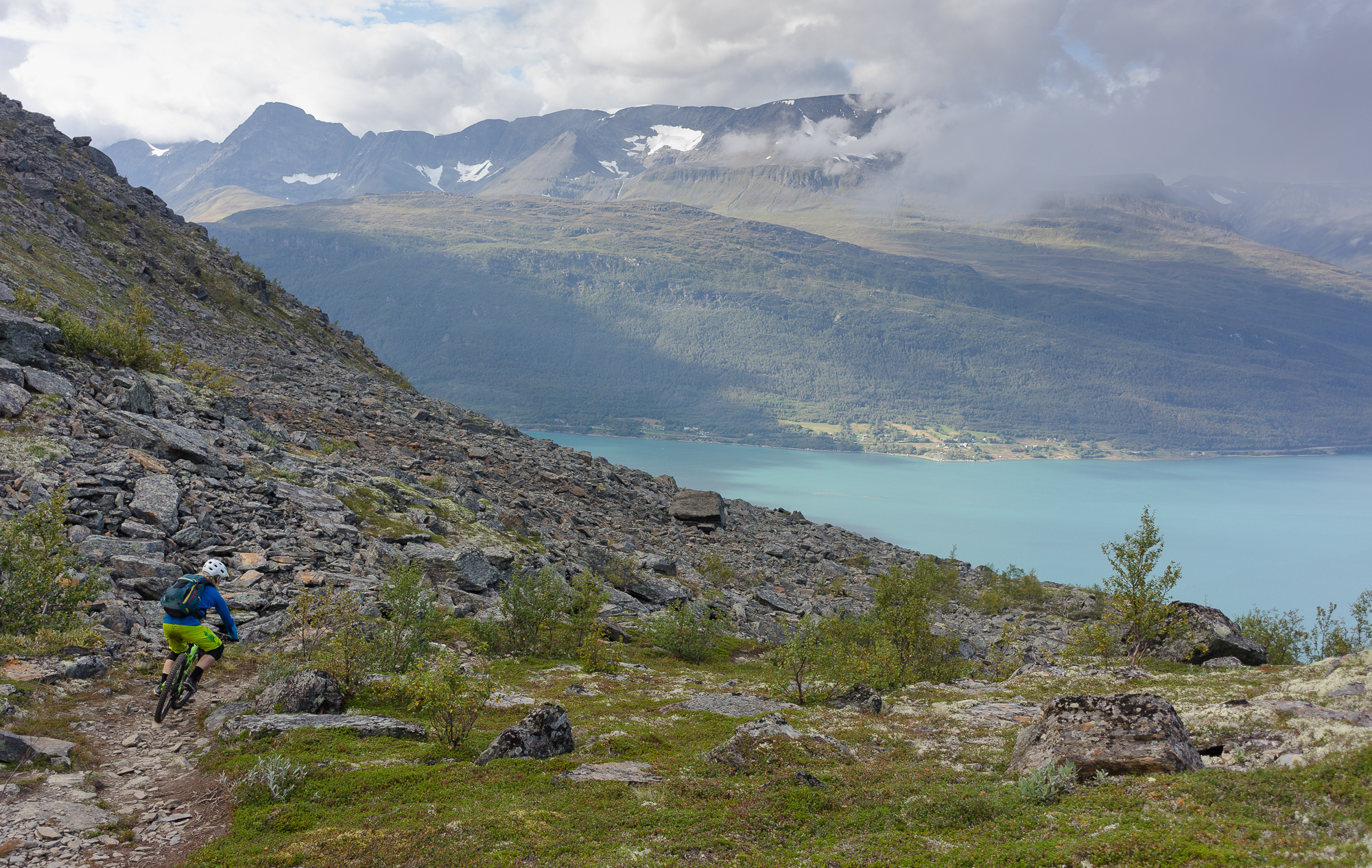 It was GLORIOUS. The top bit was loose, dry and riddled with switchbacks. Further down it got more solid but damp, with slippery rocks polished from thousands of Nazi soldiers boots keeping us on our toes. The straights between switchbacks got longer and longer, and speeds were higher and higher when they inevitably appeared without warning, with the damp rocks not helping in providing grip for braking or turning. 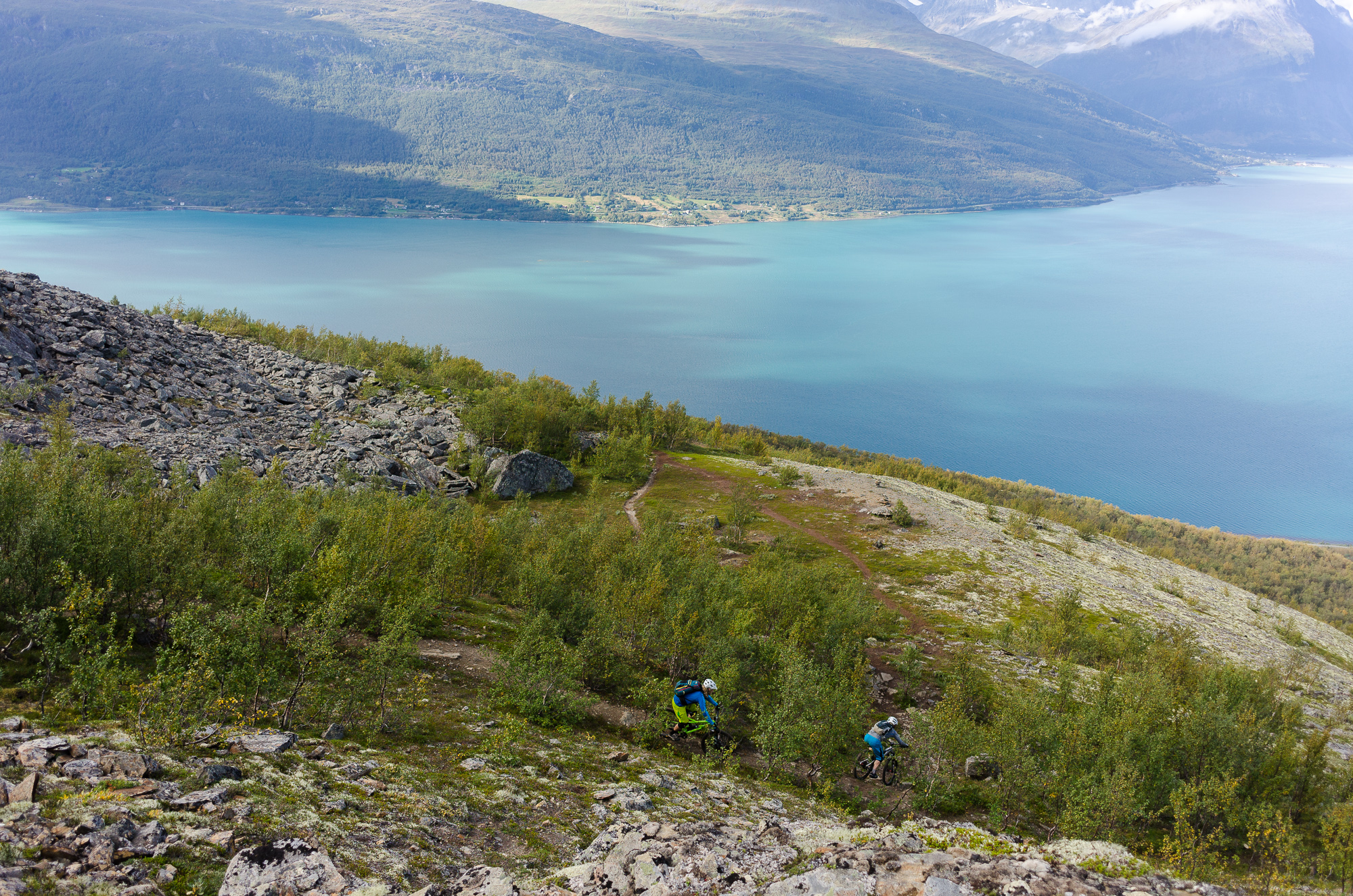 We finished down by the fjord, just as it should be in Norway. A perfect end to an awesome festival, thanks a lot to everyone!